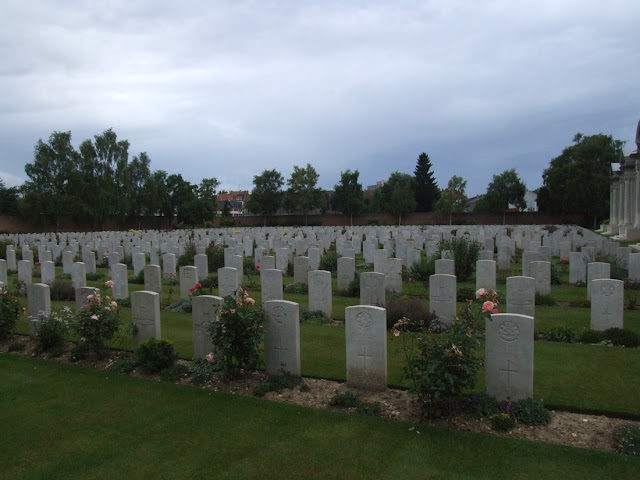 Graves at the Arras British cemetery. There are about three thousand graves here. 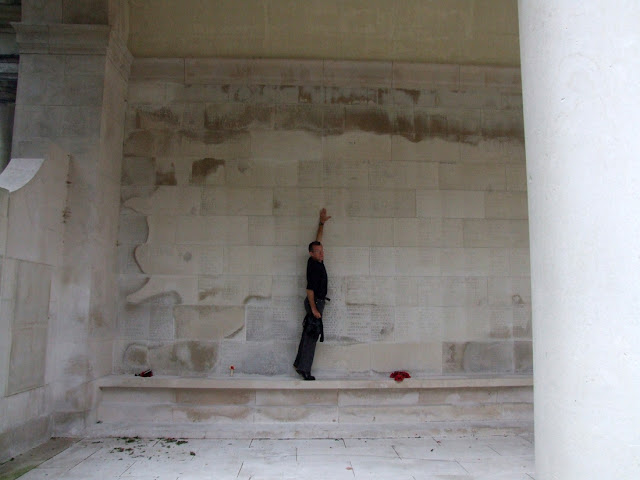 It took Marilyn, Alice, Emily, Abigail and myself well over an hour to find Williams name on the Lutyens monument. There are 35,000 names of the missing carved on this monument.Here I am reaching up to touch his name. 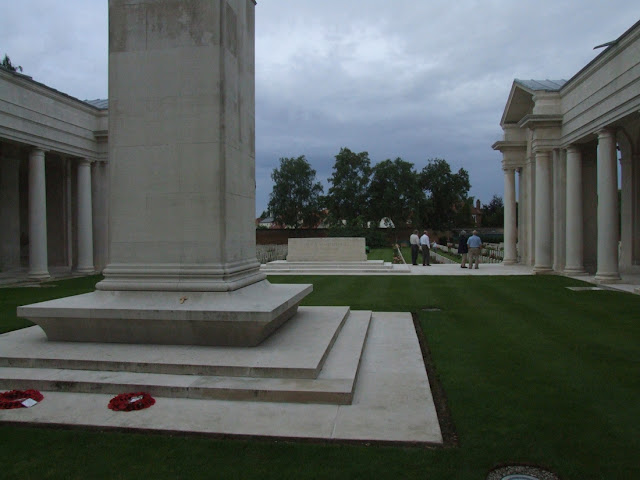 The entrance to Lutyens monument to the British dead who were killed in the fields around Arras. 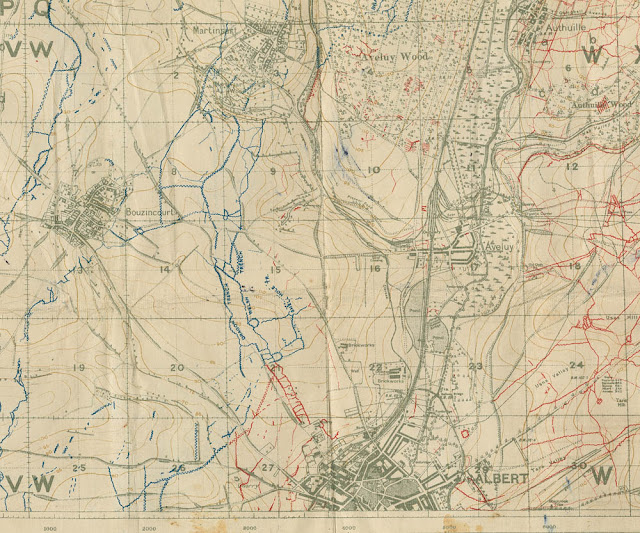 A map, showing Aveluy Woods , south of Arras where my great uncle William McGinn was killed. 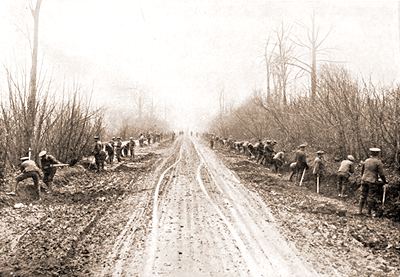 This picture of soldiers working on the road that passed through Aveluy Woods was taken about a month before my uncle was killed. 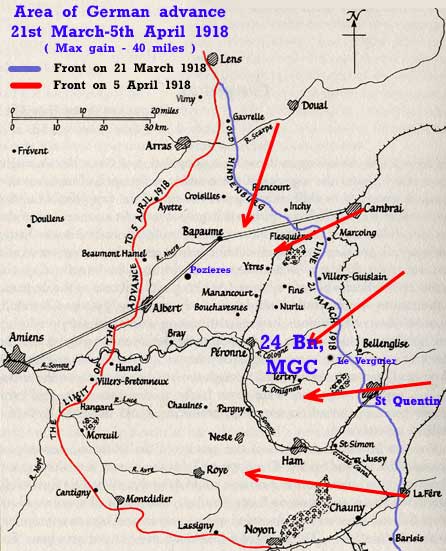 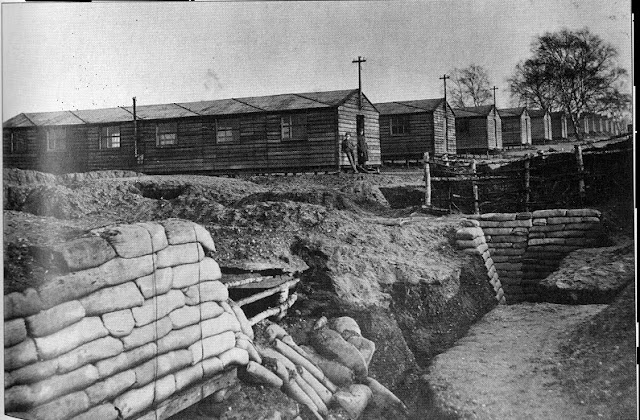 The military camp on Wimbledon Common where many rifle regiments trained before going to France. My uncles regiment, The Civil Service Rifles trained here. 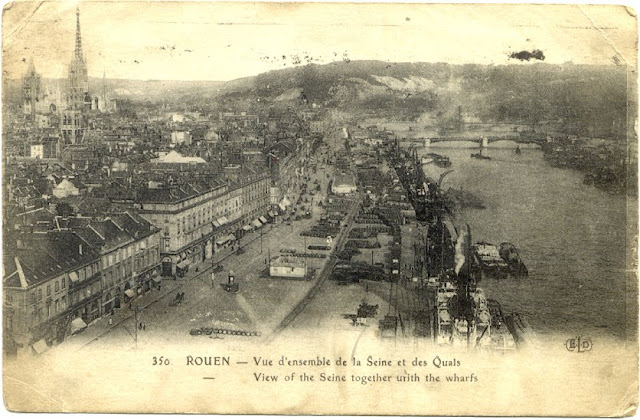 The last postcard my great uncle wrote from France. This is the port of Rouen an embarkation point for Brtiish troops on their way to the Western Front. 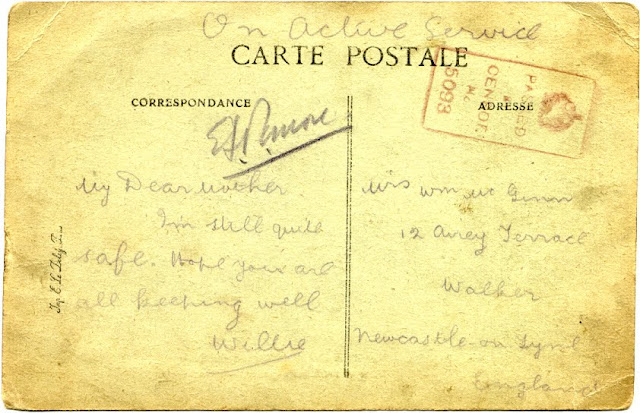 This is what he wrote to my great Grandmother. 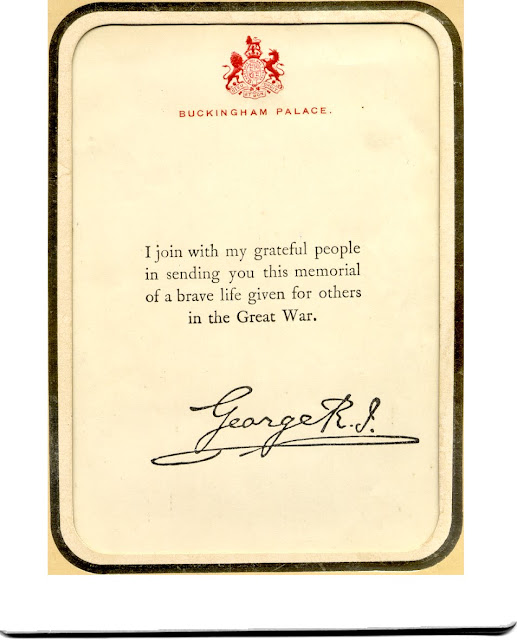 All the families of soldiers who died on the Western Front received a message from the King. 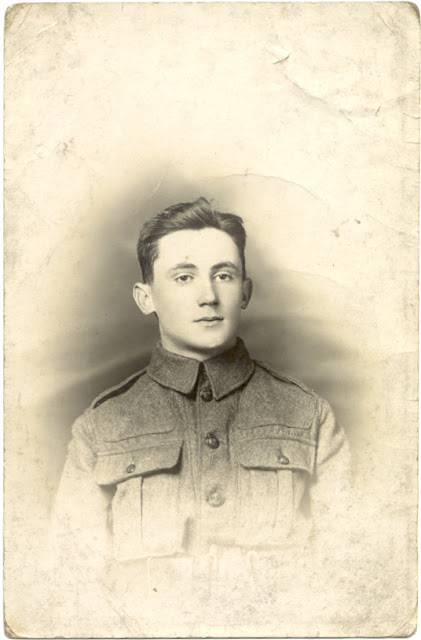 William McGinn, before embarking for France. He was 19 years old. He survived in France for three weeks.


WORLD WAR I, AN OVERVIEW OF THE POLITICAL, THE HOME FRONT AND THE MILITARY.

My own family have been very much part of the terrible traumas of the past two world wars. Close members of my family have died in action in both wars. In 1914, at the start of the First World War, my maternal great grandmother and grandfather, Susie and William McGinn lived in  Newcastle upon Tyne .William McGinn moved from County Limerick to get work in the shipyard, Swan Hunters, on the Tyne. There he met Susie. They lived in a three story house,a pigeon loft installed in the roof, at 12 Airey Terrace Walker, close to the River Tyne and Swan Hunter’s yard.

Their youngest son, also called William, was a very bright lad and passed his civil service exams to get him a prized job with the civil service. At the age of 18 he went to Ireland to work in the post office in Dublin as a clerk. It was the moment the IRA was preparing for the Easter Uprising against British rule in Ireland. Although my great uncle had Irish blood in him,  because he and his family were now living in England, he was regarded as a traitor and he was threatened with the message, “Your next McGinn,” meaning the IRA would kill him. He wrote home and my Great-grandmother sent him the money to return to Newcastle. Soon after this he joined the Civil Service Rifles Regiment and in 1918 was trained at the army rifle training ground on Wimbledon Common and shipped over to France to make up the numbers in his regiment on the Somme waiting for the final German push in 1918. On the 1st of April 1918 he was killed when the Germans shelled Aveluy Woods south of Arras in which his regiment was encamped.My great uncle was dead and his body was not found. The artillery bombardment of Aveluy Woods had probably vaporised William and his colleagues on that day.

I have been to Northern France many times. It is just across the Channel for me, and I have seen the War Commission graveyards dotted about the French Countryside, they are beautifully kept, pristine white gravestones in smart rows neatly occupying patches of the poppied fields for tens of miles around. I found my own great uncles name on the magnificent Lutyens memorial in the cemetery in Arras. There are about three thousand headstones in the cemetery for soldiers whose bodies were found in the fields and trenches but, there are a further 35,000 names carved on the walls and monuments of Lutyens masterpiece, commemorating those who were lost. That is 40,000 dead from one small area in France. It beggars belief.

I know this is difficult to comprehend. But I never heard my grandmother complain or express any regrets, about her brother William, who was 19, in Aveluy Wood in 1918, and then lost her own son Howard, who was 18,in a bombing raid over Southampton, in the second world war. She would talk about them and tell me what they were like and about their interests and hobbies and all this was done fondly. She never got upset. It was all said plainly.

The perceived view of the Ist world war is that it was futile, that it was horrific and a tragic waist of life and that life in the trenches was hell on earth and it was all these things. However the responses to the war were far more complex and ambiguous at the time. For instance different meanings came out of the war. It was seen as a miraculous deliverance from an evil enemy; it was seen as a remarkable victory and a cause of national survival. For those who took part there was the horror, boredom, apathy, the frustration and terrible sorrow for lost family and friends but there was also pride in camaraderie.  Veterans wanted to celebrate their survival and the camaraderie between mates but many thought this remembrance would upset bereaved families. This presumed emotional need for the bereaved families created a powerful social taboo. People who criticised the war couldn’t express their views easily because they didn’t want to upset the bereaved. To call the war futile meant that loved ones died for no reason. Even by 1928, Sir Douglas Hague, who had been the Commander in Chief of British forces at the first great Battle of The Somme, was still seen as a heroic figure and people lined the streets at his funeral.

So how did this war begin and why?

In the late 1800’s the world was changing. The great Austro Hungarian Empire was waning. The British still had their great Empire intact but because of the Austro Hungarian collapse there would be a power vacuum in the world. The Germans under Kaiser Wilhelm II saw the opportunity to fill this vacuum. Kaiser Wilhelm was forming aggressive policies to create a German Empire on the ruins of the Austro Hungarian Empire and also expand into Africa to counteract the British. In the 1890’s the Germans did not renew their alliance with Russia., they opted instead for an alliance with the ailing Austro Hungarian regime. In 1894 France an d Russia signed a treaty to counter balance this perceived threat from Germany. By 1898 Germany began building a navy to promote its global ambitions. Britain saw this as a threat so they concluded limited agreements with France and Russia. This created two power bases, the Entente Powers and The Central Powers. Simply it could be seen as an autocratic power balancing a democratic power but it never was as easy and straightforward as that. Democracy, in Britain at that time, wasn’t the democracy we know today. Authoritarianism still prevailed even in the so called democratic countries but they were developing in the right direction and the road to fuller democracy in the voting system and landownership was on track.
By the Summer of 1914 Germany was willing to risk war. It had built up it’s strength militarily and politically.When the Archduke of the Austro Hungarian Empire was assassinated in Sarejevo the Germans took their chance. They sided with Austruia against Serbia, who they accused of backing the assassination. It was a good excuse for Germany to go on the offensive. Russia was still rebuilding it’s forces after defeat by the Japanese in 1905 and was still relatively week. Some have said that Germany had been planning a war since 1912. So Germany attacked and advanced into Russia.

One month after the war began Germany was drawing up far reaching plans. Whether they already had these plans formed it is difficult to know. They wanted to break French power and reduce Belgium to a vassal state, which had far reaching effects for Britain. Germany, in a such circumstances could use Belgium ports for it’s new vast navy and so threaten drastically British naval power. They also decided they wanted to carve out a new colonial Empire in Africa. The power base they wanted to make in Europe would be called,” Mitteleuropa,” and create a German dominated customs union giving Berlin economic dominance. By 1917 or 1918 they planned to create a huge Empire based on the ruins of a defeated Russia .


That final Somme battle, that my Great Uncle William McGinn fought in, could have meant defeat for either side. By 1918, after four years of carnage, the war still hung in the balance. The Germans had driven the French and British back but their lines were overstretched, their resources running out and they were exhausted as a military force. The British were able to counter attack on the Western Front and this time there was no resurgence for the German army. On the 6th April, the German generals had begun to realise that their offensive was futile.

By the end of the war, within the relatively short period of four years, military tactics, equipment and the whole way of waging a war had changed.  Trench warfare was not so prevalent at the end.Tactics and expertise and the machinery of war had developed and finally the British and the allies had a fast, flexible fighting force that could resist a German onslaught and counterattack and defeat them with tanks, fighter planes, bombers, machine guns and tactics that took the soldiers out of the trenches and made them a moveable force. They had retreated under the pressure of the first attack, keeping their lines intact using skirmishes and movement effectively and when the Germans ran out of steam they were able to counterattack effectively and what is more,decisively this time.My uncles regiment had moved almost daily from one part of the front line to another and where they had taken a village from the Germans one day and moved on, sometimes they had to return and retake the same village because the Germans had come back.

This is the final letter William wrote to his elder step brother, Peter, on the 14th March 1918. 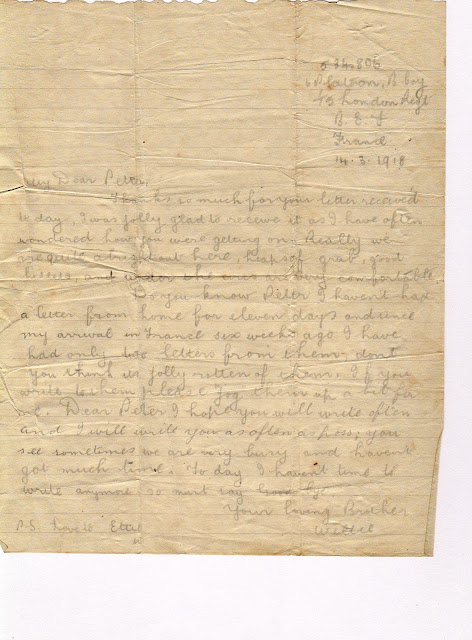 It is written on the 14th March 1918 and William was killed on the 1st April 1918.
There are a couple of things to notice about the letter. It appears to be written in two parts, perhaps at different times in the day. Each part starts, "Dear Peter..." The first part he praises the food rations but then goes on to  complain about his parents not contacting him. There is an element of stress. The second part, the hand writing slopes more to the right and looks rushed. He mentions in the second part about sometimes being  in a hurry and not having much time. He may have been at the point of action.

Bibliography: The Civil Service Rifles in the Great War: "All Bloody Gentlemen." by Jill Knight
Posted by TONY at 12:50:00