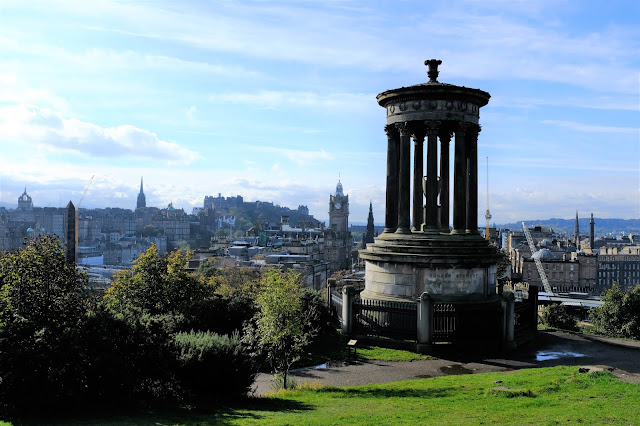 Last Thursday, 18th October, Marilyn and I got an early morning flight from Gatwick to Edinburgh Airport. We thought we would take a break before the half term began for schools, in England,. It was my second time in Edinburgh. I spent a few days in Edinburgh four years ago. It was Marilyn’s first time there. 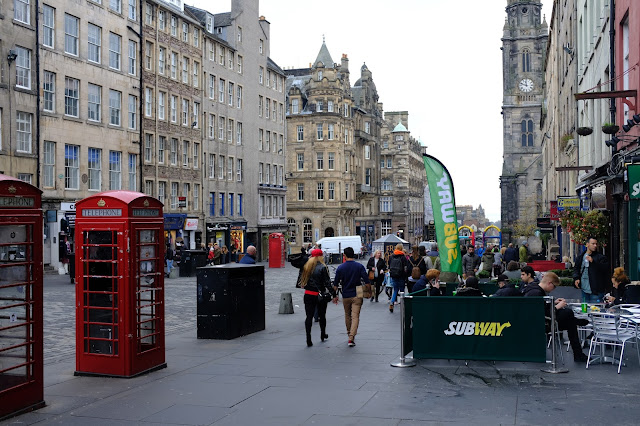 Over two days we saw most of the sights; Edinburgh Castle, The Royal Mile, Holyrood, Calton Hill and Princess Street.  We visited some of the museums; The National Gallery, The Museum of Edinburgh, The Museum of Surgeons  and we walked past the Museum of Scotland and the Museum of The Mound, located in The Bank of Scotland building next to The Nor Loch. We visited Mary Kings Close and drank a beer in, Deacon Brodies, public house. We also walked through a graveyard or two. We visited  Old Calton Cemetery, that has a statue of Abraham Lincoln and contains the mausoleum of David Hume, the 18th century, philosopher , historian and economist. We walked through  Greyfriars Churchyard where the Covenant was signed in1638 by the Scottish Presbyterians who followed Calvinist ideas. A place full of ,”ghosties and ghoulies,” at night. 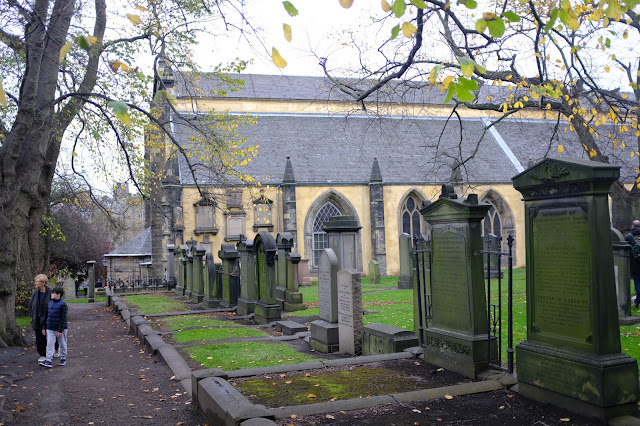 Edinburgh is beautiful , it has a special feel and a unique personality but  it appears Edinburgh has become a cliché, a pastiche of itself. Busby helmeted pipers wearing full regalia busk on street corners. The Royal Mile has only five types of shop; tartan shops, coffee shops, pubs, whisky shops and gift shops. Princess Street appears to have lost its glory. It comprises mostly chain stores, Primark, H&M, Waterstones, NEXT,  W.H. Smiths and Marks and Spencers. Jenners, a famed Edinburgh department store dating from 1838, still stands on the corner of St David’s Street and Princess Street. Marilyn and I went into Jenners to see its magnificent great hall. We could only imagine the splendours that the whole of Princess Street once had. 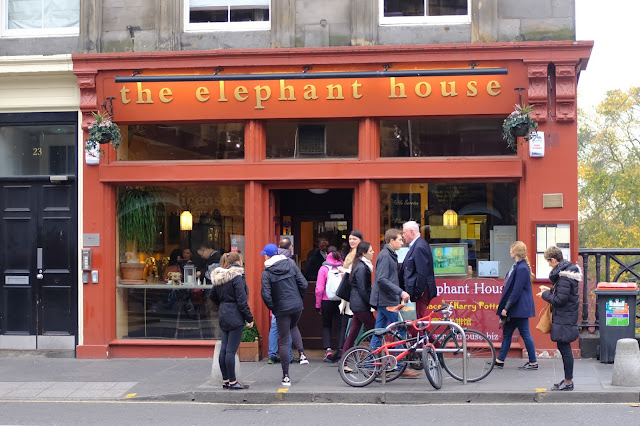 The Elephant House, one of Edinburgh's many coffee shops. It is where J. K. Rowling wrote the opening chapters of Harry Potter and The Philosophers Stone.

Tourism pervades Edinburgh. The streets were full of Americans. You can hear their accents in the air. Some of the young Americans must be students at Edinburgh University. There are tours; Harry Potter tours, Ghost tours, 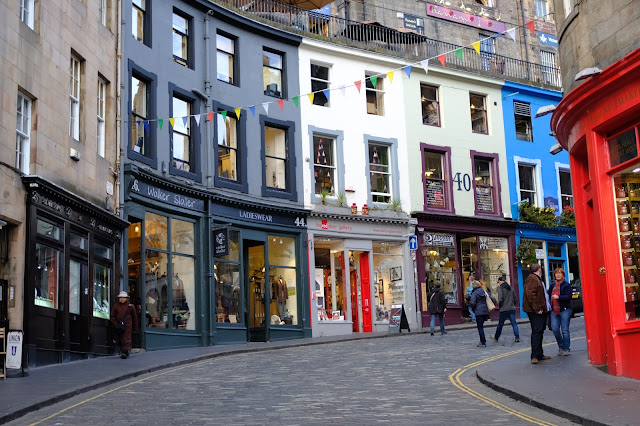 The Mary King Close Tour, a tour of the underground vaults beneath the approach to South Bridge, a tour of Edinburgh Castle, a tour of Holyrood Palace, a ghost bus tour, and other tours are well advertised such as Whisky Tours of the Highlands and Highland tours. The number and variety of tours seem to go on and on. I began to have the feeling that that is all there is to Edinburgh now. 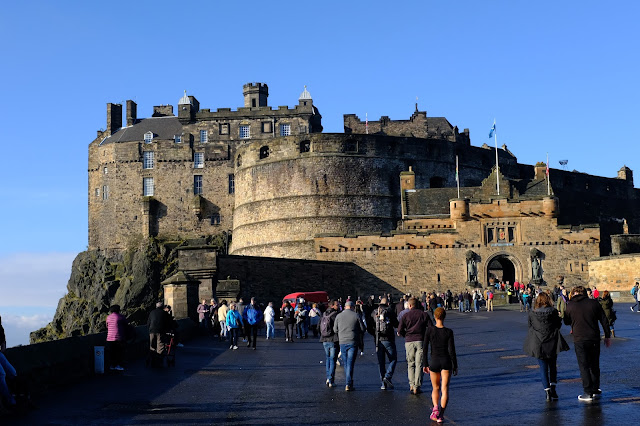 I am wrong though. 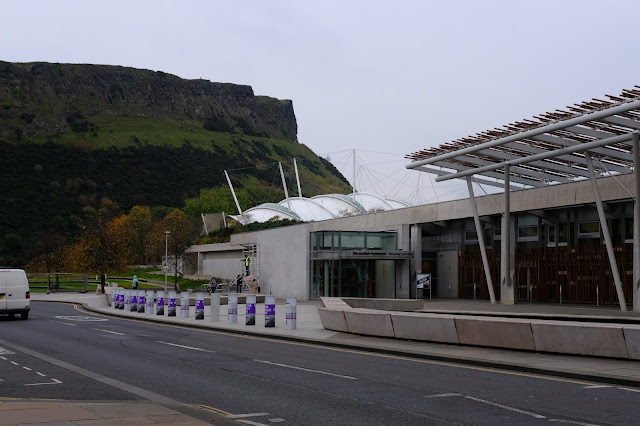 The Scottish Parliament at Holyrood with Salisbury Crags in the background.

The Bank of Scotland is based in Edinburgh and Edinburgh is an important world financial hub. Financial services are a big part of Edinburgh’s economy. Edinburgh has an important law school and the city itself is the center of Scotland’s legal system. There is a growing technology and software industry.  Edinburgh University is a world renowned university for research. The Royal College of Surgeons is one of the worlds famed medical schools. 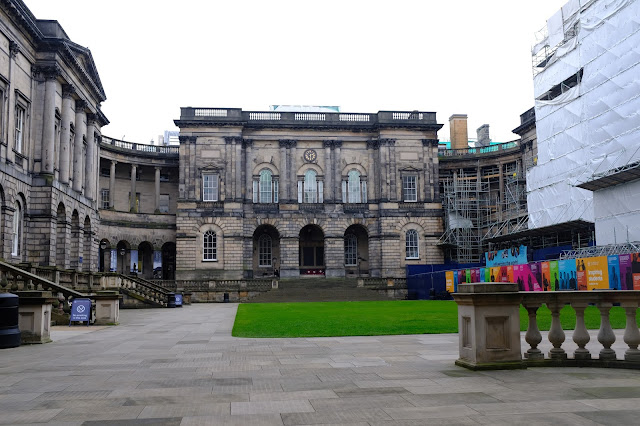 The Edinburgh Festival promotes and helps develop national and international artists and musicians. Edinburgh has many museums, many of world importance such as The Museum of Scotland, The Scottish National Gallery and the Scottish National Portrait Gallery as well as many local, and specific theme based museums. These are important to promote Edinburgh, its past, its present and to influence its future. They relate what Edinburgh and Scotland is to the world. 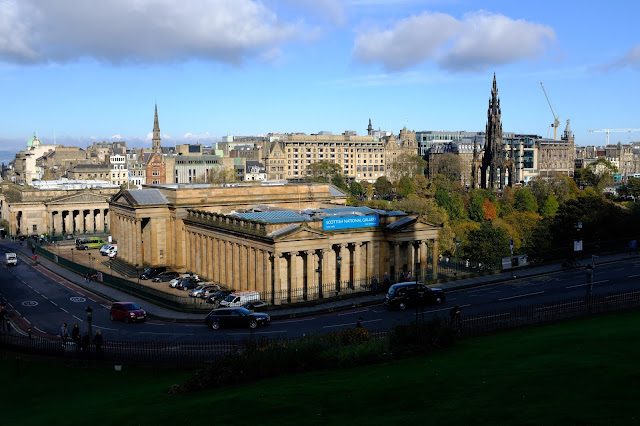 Edinburgh City Council has a strong plan in place to promote local business and industries and attract, local, national and foreign investment for the future. Edinburgh is an international centre for sport including international Rugby at Murrayfield and it has been the host city for the 1986 Commonwealth Games. Alistair Grant, writing in the Edinburgh Evening News , states.
“An impressive 1637 new businesses were set up in the Capital over the three months to April 2015 – a 5.1 per cent increase on last month – while Edinburgh Airport enjoyed its busiest April on record. And over the 12 months to March 2015, 32 different foreign investment projects brought stacks of extra cash into the city, creating 447 new jobs in the process. Councillor Frank Ross, the city’s economy leader, insisted the figures were “further evidence of Edinburgh’s resilient economy”. 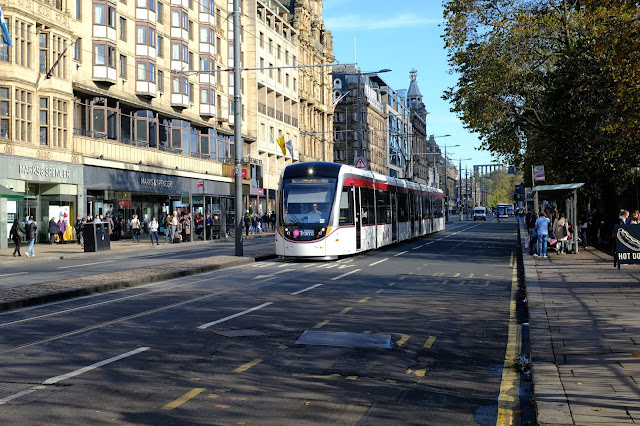 A tram in Princess Street.

We stayed at a wonderful four star hotel called ,"Ten Hill Place." Hill Place is a beautiful Georgian Square which is owned by the Royal College of Surgeons nearby in South Bridge Road. "Ten Hill Place," is part of the property portfolio of the college. All profits from the hotel, which comprises the houses along one side of the square, is used to help finance the college. 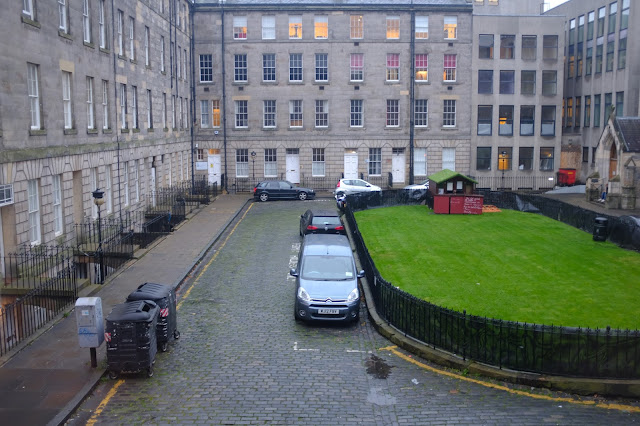 The Georgian Square, Hill Place, from our hotel window.

It is said that Edinburgh has recovered from the financial crisis of 2007 and 2008 better than any other city in Britain and is looking towards a vibrant future. Edinburgh does seem to be, on the surface, over reliant on tourism but it is resilient and has an air of optimism for the future. Navigating through BREXIT is another story.