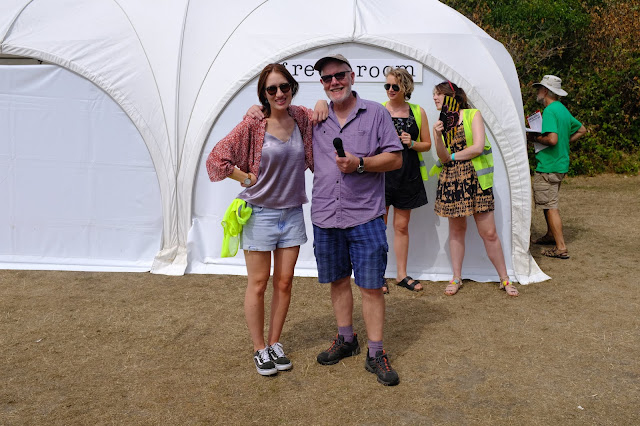 Ellen and Gabriel, the founders and organisers of the Tooting Folk and Blues Festival.

The Tooting Folk and Blues festival took place on Saturday the 4th August between 12pm and 7 pm. It has been held for the last four years on that piece of Tooting Common situated by the corner of Dr Johnson Avenue and Tooting Bec Road opposite the Streatham estate. Saturdays event went some way to relieve the wilting qualities of our never ending heatwave this summer with some great music, numerous food outlets and, three beer tents. The crowd was enlivened.

A definition of anthropology in the Oxford dictionary states that anthropology is “ the study of human societies and cultures and their development.” Anthropology covers subjects such as evolution, behaviour, adapting to environments, communication and socialisation. The Tooting Folk and Blues Festival has it all.

The festival is organized by my friend Gabriel Mesh, his daughter Ellen and his wonderful wife Isobel. I wrote a blog post about the first Tooting Festival held on  Saturday the 8th August 2015 and looking back at what I wrote then I predicted that the festival was such a special community event for the people of Tooting and South London that it would definitely continue annually. I have felt inspired to write once again about this, the fourth festival. 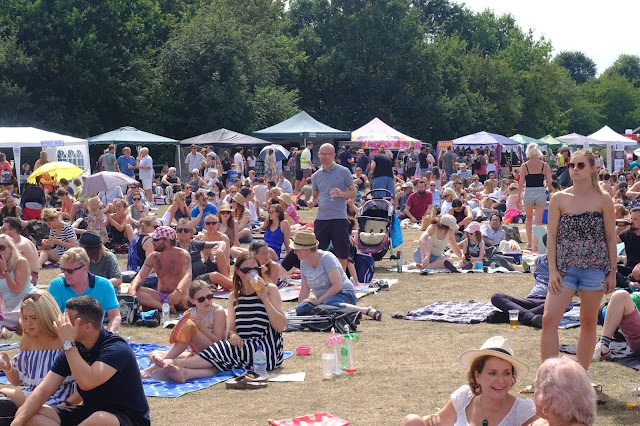 The crowd gathers and some of the food outlets in the distance.

I arrived at the south end of the festival site. The municipal toilets  and wash rooms were open and a whole array of blue portable toilets lined the shrubbery on my left. The natural arena lay before me, an open area of grass bordered by trees and bushes creating a large ovoid shaped expanse. The edges of this space were, for the festival, lined by numerous food outlets. “The Parsons Nose,” made delicious burgers in buns and hot dogs. Delicious aromas came from the, “Home Cooked Thai Flavours,” stall. “The Mansfield Farm,” van sold real dairy ice creams. Two young lads, “Made in Chelsea,” types, enticed customers with espresso martinis created magically from a shiny chrome contraption at the back of their pale blue Morris Minor. Sambrooks Brewery sold craft beers from two stalls. I can recommend the ,”Wandle,” beer. I had a few pints of the Wandle, a lovely light tasting beer made with maris otter pale malt, fuggles, goldings and Boadicea hops, so the sign next to the large barrel of “Wandle,” positioned under the cool shade of the Sambrooks awning informed me. The beer takes its name from the local river Wandle. “Field and Flower,” provided food made from natural organic sources. Other outlets included, “ Lovely Bunch of Coconuts,” “Burritos,” “Sticky Beaky,” that provides slow cooked fast foods, “Slush Candy Floss Sweets, “and, a blast from the past, a “Mr Whippy,” ice cream van was situated near the entrance to the festival. From the anthropological point of view there was on this one site a variety of foods from different cultures and parts of the world. A rich cosmopolitan range of incredible flavours and smells assaulting the noses, taste buds and imaginations of us all. If evolution is nothing else, it comes about by the coming together of disparate parts to create new wholes. 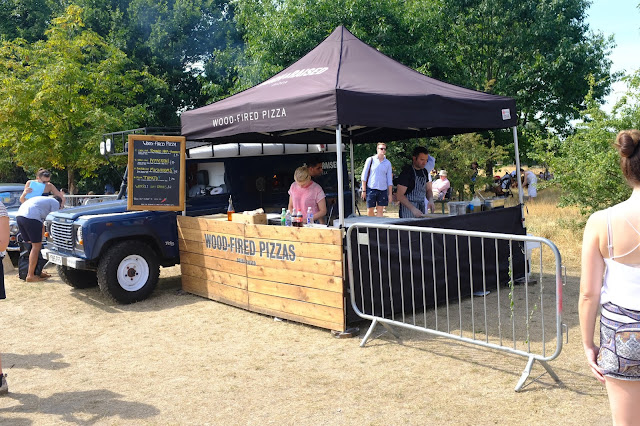 This year Gabriel and Ellen had a stall to sell the CDs that many of the bands have made. New this year, they also sold a Tooting Folk and Blues T shirt. 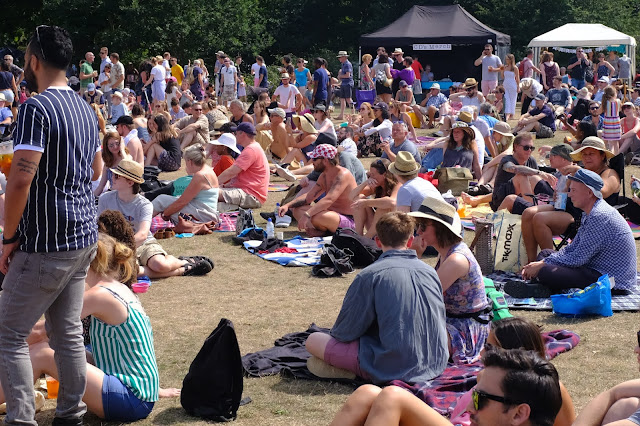 Families and  friends gather in one great mass of people.

From a societal viewpoint this festival had all the elements of a rich, creative and evolving society. Families and friends spread out  square blankets claiming their territory. The demographics of the festival had a diverse number of groups, people in their twenties gathered together and families with mums, dads and children and also individuals such as older men and women.One elderly lady wearing a long blue dress threw down her walking stick and danced to a reggae beat. Many people sought shelter amongst the trees, a primeval response, protecting themselves from the hot rays of the sun. The ,”hunter gatherers,” amongst us queued with hard earned money to buy the delicious offerings at the food stalls. “Carers,” sat with children and the elderly in protective groups on their blankets. Some groups interacted with other groups talking and laughing. The various groupings, each within their demarcated areas, were located within the mass of the festival crowd. A whole society existed here on this piece of grass on Tooting Common. There were those there to protect us, the police. A first aid tent to help those with physical problems. An information tent  provided information about the things we needed to know.  The bands provided art, imagination and creativity combining language, sound, sights and movement.  It seemed to me this large group of people  had enough  talents,  cross cultural experiences and age ranges to populate a new world . What sort of new world? 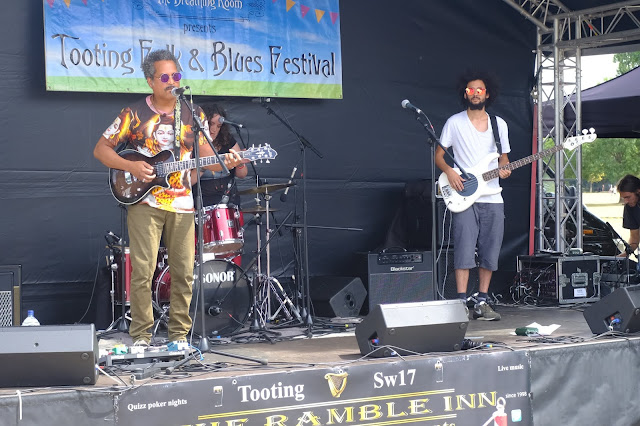 Stunflower, a mix of reggae, folk rock and punk.

The food stalls were one area where different cultural experiences came together creating synergies that produced new evolving culinary delights. The music and the bands were the other culturally diverse and creative element. The Vooduu People, an electric soul band from Brixton, sang a song called, Dynamite. “ Chemistry, whatever they want to call it, me and you’ve got it.” A great line describing succinctly the cultural symbiosis going on at the Tooting Festival. Stunflower, sang one number that combined reggae, electric blues and  punk sounding elements. 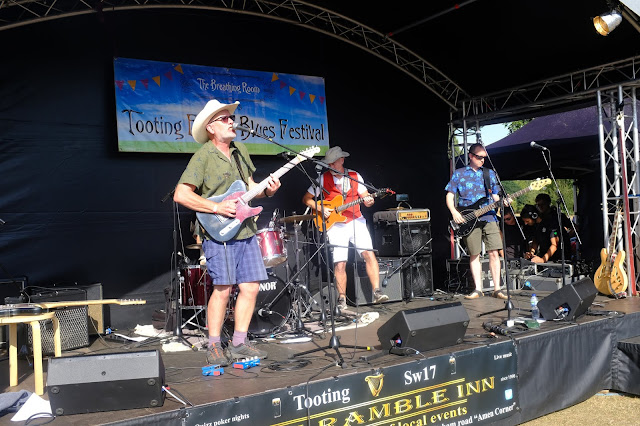 The ,"Sherriff of Tooting," Gabriel Mesh and The Gas. Great guitar playing from all participants.

Gabriel Mesh with The Gas, were our Tooting Sherriff and his deputies. Gabriel was, “keeping his eyes wide open.” Tommy McCardle provided some forceful driving rock numbers that had a gentility and emotional side. His memories of San Francisco and other life experiences showed how the singer songwriters are the diarists and poets of our time. 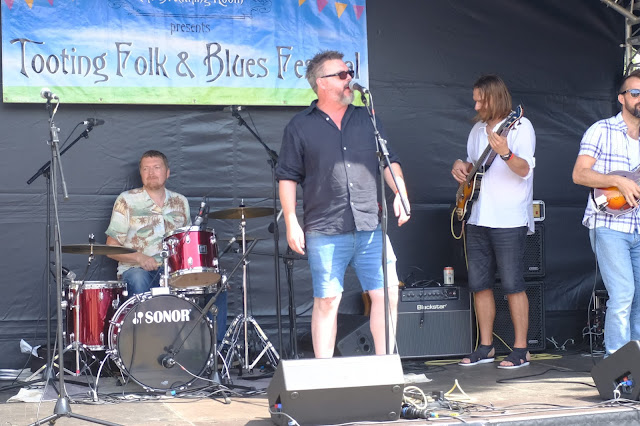 Robin Bibi provided  nuanced and powerful acoustic guitar playing and encouraged us to,” Let The Good Times Roll.” His voice carried emphasise and meaning as he lived the songs he sang. 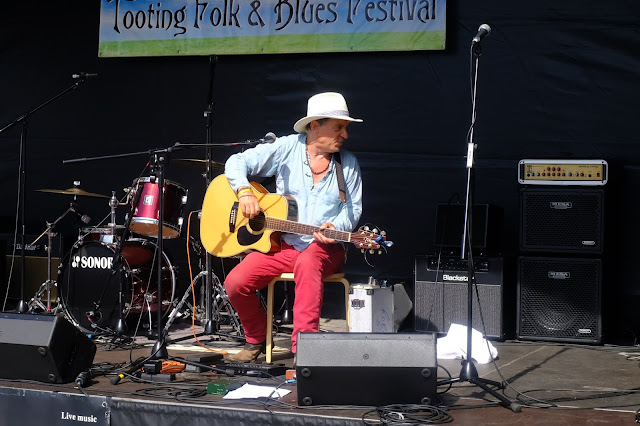 Jack Harris, with his dry, laconic style of humour entertained us to his different take on life but his honest singing and guitar playing, dredging the depths of his emotions engaged his audience and created a powerful response to a great set. 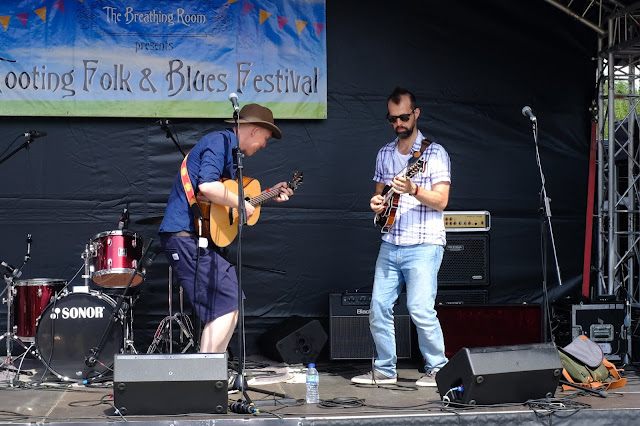 Jack Harris, with the hat, giving a performance of depth and meaning.

Other wonderful performances were provide by the ,”Robin Booth band,” and also the great ,”Conrad Vingoe.” “Whom by Fire,” were a mainstay of the Festival once again. They are regulars at the “Breathing Room,” nights at the Antelope in Tooting Broadway. The Nunhead Folk Circle, another "Breathing Room," regular, performed a great set belying the Hawaiian shirts and straw hats. They performed some great folk rock numbers. 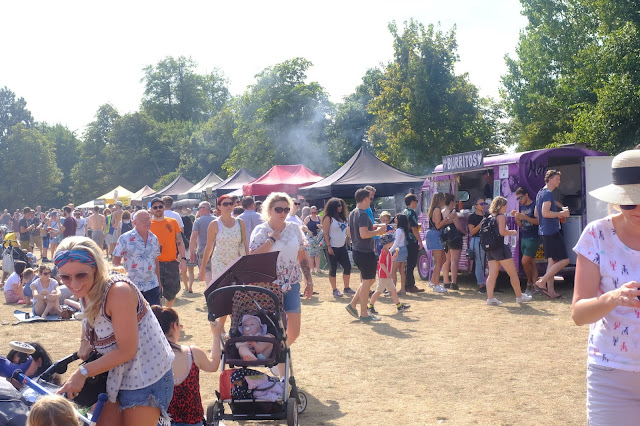 Food and drink in abundance.

The festival was an incredibly successful social, emotional, creative and musical experience. Gabriel, Ellen  and Isobel,  put so much hard work , passion and love into producing it for us once again. The festival is going from strength to strength.