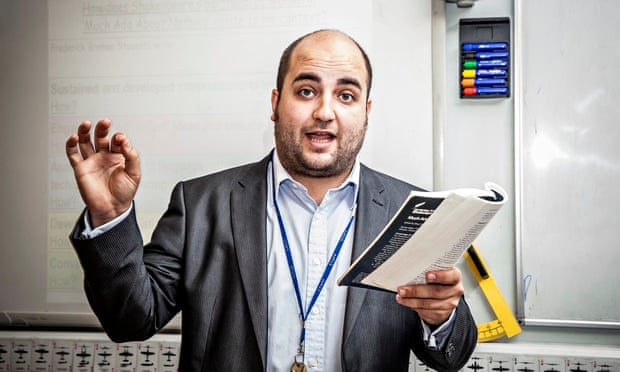 Mr Bispham in the first episode of EDUCATING THE EAST END at," Frederick Bremer School," in Walthamstow.

Among the myriad of ,”real life,” documentary drama series such as ,”Made In Chelsea,” “Made in Essex,” “Footballers Wives,” and other semi glamorous life portrayals, are a set of documentary dramas that are a sub-genre within this set of ,”real lives.” It concerns schools. “Educating The East End,” an eight part series of programmes follows  a head teacher, the teachers, the pupils,  lessons and  staff meetings that take place at the, Frederick Bremer School in Walthamstow.
The focus of the first episode, are the trials and tribulations of Mr Bispham, a trainee teacher learning his craft on the ,Schools Direct programme. Schools Direct is one approach to becoming a qualified teacher. The school  pays you a salary on an unqualified teacher rate while you are supported in learning classroom skills. You previously have had to work for at least two years in another career and also have a good degree.  Schools Direct has some advantages over the usual one year PGCE route. More time is spent in the classroom and you are attached to just one school. There is some time allocated to University lectures where the theories of child psychology, child development and the philosophy of education are taught. At the time this programme was made Mr Bispham is the youngest member of staff in the school. He has been put in, at the proverbial,” deep end,” teaching English to a boisterous year 9 class.

We see Mr Bispham first of all waiting in a classroom as a rowdy group of 14 year old, year 9 pupils enter.He thinks of the girls in this class as ,”a force of nature.” He calls each pupil by their name and talks to each one asking them something about themselves. Later he tells the interviewer, out of the hearing of the children, that teaching is 50% ,”stand up,”and 50% motivational speaking. With a lot of ,”banter,”it takes a few minutes for him to get all of the class attending to him and one girl, Tawney, will not stop talking. Tawny, with a pierced tongue  and a big attitude, wants to be an actress and has applied to. “The Brit School.” She is certainly good at,” playing up,” in lessons. Mr Bispham is straining every fibre, alert to every incident and comment and interaction going on in the class. He contends with little arguments amongst some, cheeky comments about his name and his ethnicity, all challenges to his authority. He gets the class to focus on a line in Shakespeare’s, ”Much Ado About Nothing.” On the interactive whiteboard is a speech between,  Claudio and Leonato “ Give not this rotten orange to your friend/ She’s not the sign and semblance of her honour.” The class discusses the meaning of any words they are unfamiliar with and then discuss attitudes to women.  Those ,”strong,” girls in the class are engaged with the topic. It means something to them. After the lesson Mr Bispham leans against the door frame at the entrance to his classroom. He sighs and looks at the ceiling. Everything has been drained from him. He is exhausted.

I often stood at the back of the school hall, on  Friday afternoons, during the end of week assembly, leaning against the wall for support, looking and feeling just like Mr Bispham. I stood there, my face drained, the life sucked out of me. You need to be self reflective.  What can I do next? How do I get them to learn? How do I get them to progress? How can I do  better?  Mr Bispham would agree. I remember feeling every nerve in my body and  like Mr Bispham there were moments when I dug deep for strength and I too wondered if teaching was for me.  I watched Mr Bispham adapting, there, on the screen.

The look of worry and concern etched on Mr Bispham’s face in the corridor after Jenny Bishop , the head, informs him his end of year assessment is due, was my face too sometimes. She gave him a date for the observation. You could see he was anguishing over what she would think of him teaching that year 9 class. She asked if it was convenient. He said ,"of course," and made some comment about the class being difficult. But the head knew that. It was very interesting to watch Mr Bispham go from the despair he must have felt before the lesson to elation after his observation. He was given a GOOD assessment.  Jenny Bishop is evidently a perceptive, warm, strong person, (a great description of a good head). The deputy head praised him too and agreed with the GOOD assessment of his progress and his developing skills. An onlooker, somebody who does not work with children, might not have understood.

Mr Bispham was honest and straightforward. He joked  and the pupils in the class knew he cared about them no matter how awful they behaved. In his observation lesson he was well prepared. He had a focus and clear aim. He had his materials and resources ready, He had a child centred approach taking into account the needs of various pupils. He planned his lesson to fit their intellectual needs. He got them   working in twos, providing them with questions and tasks which challenged them. They were engaged and he questioned them bringing out their thinking processes. They were chatty and lippy and he confronted them with any unacceptable behaviour, pointing out what they were doing, the affect they had on others and the effect they had on himself and he demonstrated what they should do. These are good teaching skills and behaviour management.

The interviewer asked the children about Mr Bispham. They all said he was a great teacher. They liked him and  they all said that they  wanted to do their best for him in the observation lesson and not let him down. He had their trust because he believed in them and so they believed in him. Good teachers give their heart and soul to the kids they teach.

He deserved his, GOOD, assessment. He earned it with more than what can be described as hard work. We watched him lay himself on the line for that class.

This series is something we should all watch. It can’t show every aspect of a lesson and the teaching process, but it begins to delve deeper than most people would normally be able to experience. This series of programmes show us what heroes teachers are and what self-sacrifice  and talent and hard work they  put in. One thought that went through my mind was, what would a teacher from, Harrow, the great public school just 18miles west of Walthamstow, think about Frederick Bremer School and Mr Bispham? How would they teach year 9? Jenny Bishop, is asked at one point why she wanted to be the head of Frederick Bremer. She smiled and said she wanted the challenge and the opportunity to make her mark on children and a community that needed the best. She was fully aware of the,” mountain,” she had to climb. She is a very brave, courageous and hopeful person with a vision and she knows how she wants to achieve it. If she keeps finding the good in Mr Bispham and praising him ,Mr Bispham , will do very well.