Most days I go for a run. The weather has been particularly good recently. Its been a warm Spring. The local parks are looking green and the shrubberies are flowering. All the local front gardens are blooming with every type of perennial, biennial and annual. Its a gardeners paradise around here I can tell you.

When I go for a run I choose from a variety of routes which I try out depending on distance but often just for a change of scenery. For the last few days I have been running up on to Cannon Hill Park, about half a mile from my front door. It is close to Raynes Park and South Wimbledon. 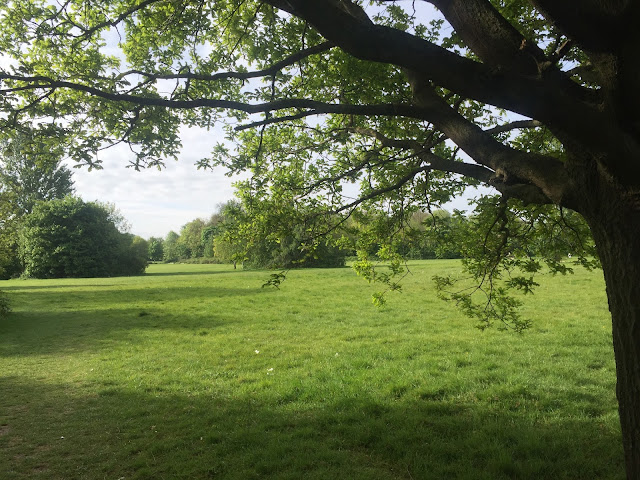 It has its own unique character and has a natural, managed aspect about it, similar to some of the Capability Brown landscapes from the 18th century although it was not designed by Capability Brown. I should think some other landscape gardener at the time probably had an input.

Records of Cannon Hill go back to the Normans.The Augustinian Canons of Merton Priory (1117-1538) owned ,"Cannondownhyll,". Merton Priory is particularly famous because Nicholas Breakspeare was a monk at the priory in 1125 ,he became Adrian IV,  the first English Pope, in 1154, and Thomas Becket was educated there by the monks in 1130.The Abbott,Walter de Merton, Lord Chancellor and Bishop of Rochester, was founder of Merton College Oxford. He took his name from the priory.
Parliamentarian forces occupied the hill  during the English Civil War (1642- 1651). They mounted cannons on the hill to help protect London.  At one time a row of cottages in Cannon Hill Lane was called Cromwell Villas. 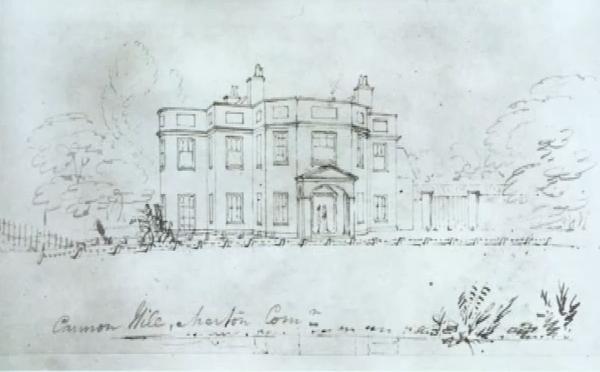 A sketch of Cannon Hill Place.
In 1763 William Taylor acquired the freehold of the site and built Cannon Hill House. William Taylor was an officer in the 32nd Regiment of foot and later became a Major General in the 14th Regiment.At that time this area was adjoined to Merton Common. The house was built from local bricks that were probably made from the black clay taken from the depression that is the lake situated at the bottom of the slope in front of where the house was positioned.
In 1832 Richard Thornton bought Cannon Hill House and he remained in it until his death in 1865. Thornton made his fortune trading in the Baltic.The Baltic trade with Britain at the time was mostly in timber but he must had strong links with the Hanseatic league, a powerful trading group of states on the edge of The Baltic, primarily German. When William Thornton died in 1865 he was worth £3 million pounds which in todays money is about £140 million. At his death it was judged to be the greatest Victorian fortune. He had no children. The house was hardly used for many years after his death and 1880 it was abandoned. It was probably demolished by 1900 but it still appeared on Ordnance Survey maps up to 1930. 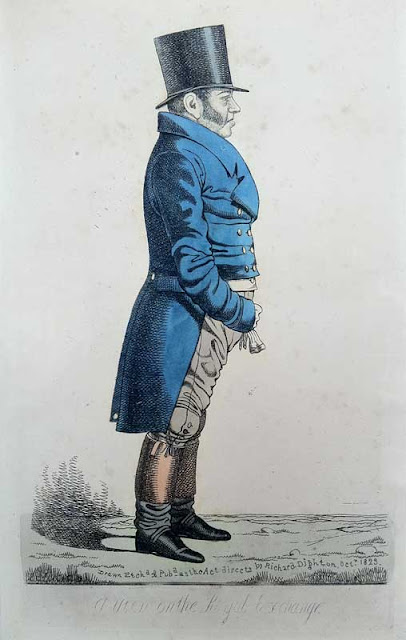 An 1825 portrait of Richard Thornton.
James Edwards, wrote the guide book, " Companion from London to Brighthelmston," (1789- 1801). Brighthelmston, was the name of the small fishing village that Brighton was developed from in the 1780s  when the Prince Regent began to visit.
He stated,
" half a mile south of the Kingston Road, adjoining Merton Common, is Cannon Hill. It is a white house situated on an eminence commanding a pleasnat and extensive prospect to the east over a small park or lawn. On the west are suitable gardens, shrubberies etc and the soil is a stiff black clay." 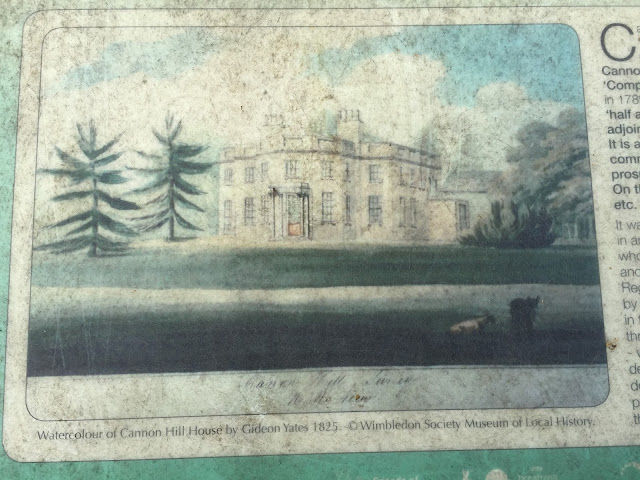 An 1825 view of the house that is displayed on an information board in the park.
The black clay is still evident. One path I ran along, through some trees, was bare and there was dry cracked mud  underfoot. The park is a wildlife reserve nowadays taken care of by Merton Council. It is a small oasis of flaura and fauna away from the hustle and bustle of South London. I may well run there again tomorrow.

AN EASTER TOPIC FOR DISCUSSION....if you want?

A MEDITATION ON EASTER AND RELIGION IN GENERAL 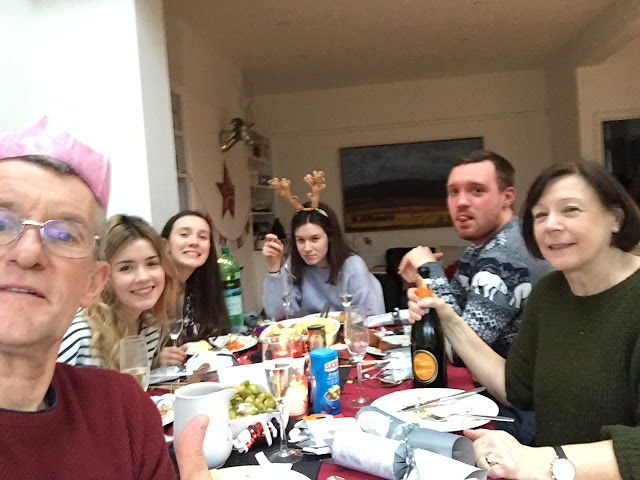 There should be no spiritual and religious titles like agnostic, atheist, Christian, Muslim, Hindu or Jew. We are all human beings. We live from birth to death and during that arc of life we are experiencing what it is to be human. All those titles and labels separate and divide us and diminish us in each other’s eyes.

I have been brought up as a Roman Catholic. The Roman Catholic Church has many traditions, tenets of faith, beliefs and practices, many that are shared with other religions and are medieval metaphors and symbolism. The Assumption, The Immaculate Conception, The Virgin Birth, miracles, heaven, hell, three persons in one God, revelations, consubstantiation, the Resurrection and the Ascension. All of these are wrong and didn’t happen and they don’t exist. They were messages and meanings to the medieval mind.

What has become difficult and impossible for the Catholic Church today, and this can be reflected in other religions, is that a long time ago it pronounced that all those things were points of faith and to be a christian you had to believe them. It also decided that certain pronouncements should be infallible. The Catholic Church is unable to change. It can’t go anywhere.  Religious intransigence has brought about pain and  all sorts of evils, including wars, the denunciation of whole groups of people, the deaths of individuals, abuse,  moral doubts and personal anguish; it has diminished the role of women, encouraged misogyny, and lead to groups of women and those with different sexual orientations being made to suffer.

What we should focus on during the span of a life is, love. If our societies could be organised to promote the development of love in the community and in our personal lives that would completely fulfill us as human beings.

Religions have gathered too much unhealthy baggage. What is apparent though is that they really do know what the essence of living should be. Different holy books, The Koran, The Tora ,The Bible, whether its Islam, Buddhism, Sikhism, Christianity , all say,love, is the cornerstone of their religion. John The Evangelist wrote,”God is love,” and, “ "A new command I give you: Love one another. As I have loved you, so you must love one another.” Mark the Apostle stated, “ Love your neighbour as yourself.”

Love is an abstract concept. At first we think we know what it means. We can all think of examples. However we also realise how little we know about love, its scope, its power and what it can do. If we really think about it in our lives we might even come up with things we didn’t realise were love at the time but later we became aware of them.
So from birth to death, all we are really trying to find, experience and give, is love. That is all that we need to be a full and complete human. We can’t ask or want for any more.

Organised religions can be good for social cohesion and it is the social bonding side of religion that many really mean when they say they are a Catholic or a Hindu or a Muslim. Organised religion can also cause social division.

I don’t think any of us should be a member of a religious group or believe in a so called  God. What we should  do is explore what love is in our lives.

The Beatles released, “All You Need Is Love,” in 1967 on Their Magical Mystery Tour album.

The lyrics were written by John Winston Lennon.