What should we do to help children recover after lockdown? 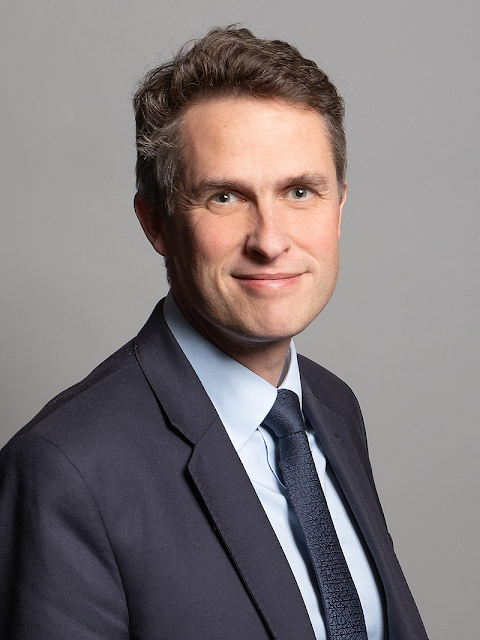 The Rt Hon Gavin Williamson CBE was appointed Secretary of State for Education on 24 July 2019.

On Monday 8th March all school children in Britain returned to school. Over the last year most had to stay at home. Only those children who  are deemed vulnerable, for whatever reason, poverty, neglect, abuse, or whose parents are key workers, were permitted to be in school during the period of lockdown. During my morning run, that often takes me along Grand Drive past St John Fisher School and, also through the Sir Joseph Hood Playing fields past Green Lane School, I  noticed children on the playgrounds or playing fields doing sport. They numbered twenty or thirty children. That is equivalent to one whole class. I know this is not a very accurate assessment of the numbers of children in school over the lockdown period but it gives an impression of the numbers there were in each school during that period.

Gavin Williamson , the education secretary, has recently announced possible measures to help children catch up since returning to school. He has suggested, among other things, longer schooldays, a five term year creating shorter holiday periods, discipline hubs and strict discipline codes to counteract the deterioration in behaviour he thinks will take place because children have been at home during lockdown. Children will explode into the corridors and classrooms of Britain won't they Gavin?. What makes Gavin not think that children will be so desperate to get back to school and see their friends and do exciting things in their lessons they will be  better behaved than they were before? I see every reason why they will be better behaved. I have my theories about this government during this pandemic. They seem to have brought in measures in different areas of government which they say is because of the covid pandemic but I strongly suspect are to do with policies which they had planned for some time but deemed unpopular but under lockdown they can introduce them quickly with the excuse they are necessary. A very sneaky way to bring in Conservative right wing policies no doubt.

Many fortunate children have been able to access online learning provided by their teachers at their own school through internet links. Teachers have worked hard creating online content. The BBC has done sterling work creating and broadcasting entertaining  and helpful screened lessons for all age groups covering all subjects. Many children have the technology, laptops, TVs, internet connections and smart phones. There were those, a significant minority, who did not have access to this online learning. I read of teachers delivering  work to children in their homes and then returning a week later to collect the work carried out. Many children are living in abject conditions of poverty that created conditions whereby even this personal service was difficult or impossible  for them to take advantage of properly.

The head of OFSTED Amanda Spielman, commenting on Gavin Williamson’s suggestions diplomatically said that ,"we need to go by the evidence."

It was interesting lately when the Chief Constable of Merseyside retired recently he made a statement  saying that if he was given £3 billion pounds he would use 20% to improve the police force and 80% to deal with poverty in his region. He thought poverty was the biggest factor in crime. If people had jobs and decent living accommodation they  would not turn to crime. This of course applies directly to education too. If you deal with poverty then the educational outcomes for many would immediately improve.

The online learning I have seen the BBC presenting has been of a high standard but no matter how good the online learning provided is, it can never be able to replace face to face teaching in a classroom. To learn , to be inspired, to be able to make mistakes and try again, to be wowed, to develop as a person you and I and all children need face to face interactions and children need it in a classroom with friends around them.  Personal interactions, empathy, understanding and face to face teaching which can immediately take into account misunderstandings or different aspects that arise  is really needed.

Sadly I don’t actually remember many inspiring teachers when I was at junior school. I remember rote learning and draconian punishments such as a rap on the knuckles with a ruler  and austere penalties for getting things wrong. That may have been due to the time I was at junior school during the 1950s. It could also have been due to the traditional type of person who was regarded as the right sort to be a teacher in the school I attended. From the 1950s, a revolution in teaching was taking place based on the work of  child psychologists such as Jean Piaget and his  cognitive developmental theories and  in Britain, Baroness Plowden  published her report on education in 1967. Plowden had  researched the best learning practices  in schools in the years before the report was published. These two, among others, such as Montessorri and her child centred educational techniques and Vygotskys theories lead to all schools taking up some form of  child centred education. Progress is never an immediate thing though and new ideas take a long time to be taken up by the mainstream.

By the time I was 11 years old, in 1963, I had arrived in secondary school. Things were a little different. I no longer felt quite so crushed by an inferiority complex and lack of confidence and belief. Was that to do with the teaching I had received up to then? I met a teacher who came from Liverpool. He had a Liverpool accent and had a wry sense of humour. I remember still feeling a little fearful but I was mesmerised by his cheeky approach to us as a class. He was a breath of fresh air.  He taught maths and made it fun. Ok, he still had a teaching  technique that lacked exploration on the part of pupils. His approach was more show and copy than experiment and problem solve, but it was delivered in an entertaining way. As I got older another teacher, our art teacher, actually told me once I had painted a great oil painting. I think it was some trees, bushes and a sky and I myself wasn’t at all sure it was any good but the art teacher thought it was good. Those two teachers stand out especially for me.  Fun and praise, those two things made me feel good.Teaching and learning should be about excitement, exploration, a passion to learn and progress and have those two elements of fun and praise  as well. Learning should make pupils ,”feel good,” I think.

I was a teacher for about forty years. I found teaching hard. If anybody tells you any different they are lying, but it totally absorbed me. It challenged me every day. From creating that close relationship with every child in my class to finding innovative and exciting ways to enable children to learn, to make it child centred so the child actually felt the learning was about them as an individual, giving the children the tools to solve problems, to be imaginative, to make things, to be challenged and enjoy the whole process. No it wasn’t easy, but doing it like that  was absolutely right and necessary.

One child I had in my class one year was struggling with most things but one day we were all outside on the playing fields just outside our classroom , all of us looking at the clouds and an occasional jet airliner taking off from Heathrow Airport nearby. It was an English lesson.As a class we were thinking of words to describe what we were looking at. This child, who was struggling, Robbie, stood next to me and he said,

“Mr Grant, that sky is so deep its like looking at infinity.”

When we got back into the classroom Robbie wrote a poem , only four lines long about the sky including the words he had thought of. I praised him so much. I remember feeling excited for Robbie. For the rest of the year Robbie was so keen and looking forward to every English lesson.

Mr Williamson wants longer school days. He wants a draconian discipline policy. He wants five terms in the year. Mr Williamson doesn’t know anything about the teaching and learning process. Longer days, more terms, stricter discipline really is not the way to go Mr Williamson. Discipline comes from close personal relationships, a belief in yourself and a desire to learn. It comes from feeling valued and being encouraged.  “Catching up,” is not about  longer days . A spark of inspiration, a sudden triggered love of something is all that is needed. Everything else follows.If Mr Williamson is worried about the children not covering every part of his precious national curriculum then he shouldn’t be. The curriculum is not education. Love, empathy, inspiration, the right sort of challenges are what is needed. Your ideas, Mr Williamson, will tire and wear out teachers and pupils and make all those important elements of teaching and learning much harder to achieve.

The first thing children need when they all get back into their classes is to say hello to their friends, be able to talk about their experiences, laugh and enjoy the moment. Leave it to the teachers to reignite the love of learning. That is all that counts.