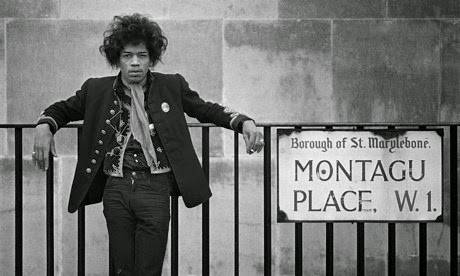 Johnny Allen Hendrix was born on November 27, 1942 in Seattle ,Washington  and died on September 18, 1970 in the London Borough of Kennsington in the heart of London from reputedly a drugs overdose.
Jane Austen was born in Steventon Hampshire on the  16th December 1775 – and died in Winchester on the 18th July 1817 reputdly from a disease called Addisons disease, a problem with the immune system, which causes it to attack the outer layer of the adrenal gland (the adrenal cortex), disrupting production of steroid hormones aldosterone and cortisol eventually causing the break down of the immune system. Not an unsimilar affect to Hendrix’s overdose. In both cases their bodies stopped. . One hundred and sixty nine years separated their births. What if these two geniuses had ever met?

They both spent time in London and enjoyed the metropolis and this might appear at first their only connection.  However, Hendrix  had a great respect and affinity with the 18th century, especially in the person of the German Composer, who emigrated to England ,George  Frederick Handel, who  like Hendrix, came to London for fame and fortune. Hendrix loved The Messiah and Handels Water Music. Hendrix was a gatherer of all sorts of music which he then assimilated through his own creative mind into new and exciting compositions. He did it with the Beatles Sergeant Peppers anthem and also the "sacred", Star Spangled Banner which he reinvented in his own style at the Woodstock Festival and gave it meaning to a new generation. Then of course there were his own original compositions made about life’s many ,”Experiences.”
In comparing Jane Austens compositons with those of Jimi Hendrix,Cross Town Traffic, for instance, has connections with Austen’s Northangar Abbey, The Gods Made Love, is comparable to the love of  Elizabeth Bennet and Fitzwilliam Darcy. Hendrix wrote ,Little Miss Strange, and of course Austen had a few strange ladies portrayed in her novels, Fanny Price and Emma Woodhouse for two. Hendrix was concerned  with money matters, homes and relationships just as Austen was. There are many ideas and themes shared by the two. In many cases the same sentiments were expressed by both.

So one day, let us say,  Jimi Hendrix was walking along The Strand towards The Royal Courts of Justice. The reason,  let me reassure you, a mere matter of a minor smoking misdemeanour and possession of a very small amount of cannibus. Who should be advancing towards him from the other direction but Miss Jane Austen herself on the way to pay her tea bill at Twinings, also on The Strand.

JH.  Hey is that you Jane? Great to see you girl.

JA.  Hello Mr Hendrix and how are you faring?

J.H. I've been reading the lyrics of that amazing dude Bob Dylan, man?

J.A. Mr Dylan? I do not recall that gentleman.

J.H.  I love Dylan, man.  I met him once, back at the WHA club  on MacDougal Street in New York.

JA Ah New York, named after that most delightful of Yorkshire cities. Such a shame it is no longer within the power of this realm.

JH.  Yeh cool,Jane. Peace to all men.I hate war. Doods die man.When I met Dylan I think both of us were pretty cosmic at the time. Our minds were with the stars. Do you dig? Hey, hows things with you? Where are you hanging out  now girl? What you doin' in London Jane?

JA It is so delightful to see you again Mr Hendrix. I am here visiting my brother Henry, who lives a few hundred paces from this very spot, in Henrietta Street.  However, ordinarily,I am living with  my mother, such a nuisance, but that is by the by and my sister in-law in Southampton along with my best friend Martha. Martha is such a problem.  She chases after vicars you know. There is a Dr Mant in Southampton she just will not leave alone whatever I say to her and no matter how much I implore her. I tell her it will all end in tears.

JH. Check that sis, hee hee hee. It’s the other way with me girl. I’m the one chasin the chicks round here. You dig!! But  hey Jane  Hennrietta Street, Its so cool. I really dig those street musicians in Covent Garden. I get inspiration for my song writing in places like that. Real cool man.

JA We hope to visit the theatre while we are here. I know Kean is performing in Lear.By the way,I do like your miltary attire Mr Hendrix. I didn't know you were a military person. You quite remind me of my dear brothers . They look smart too in their Royal Naval uniforms.If I recall we met at The Marquee Club in Soho last was it not?  A gentleman most proficient on the guitar was playing, a rather strident number if I remember, called ."White Room." Mr Eric Clapton I think. He certainly played a virtuoso performance displaying much passion.I could feel my cheeks quite blush at all the energy he manifested in his bodily movements. His suggestion of a, "white room with black curtains," has quite influenced us all in Castle Square as to our choice of décor. My ears didn't stop ringing  for days.

JH.   I got blacked out windows in my pad too. I need head space. Time to think. Time to create man. I live next to where that dude Handel lived. He was some musician.You, ever checked out his stuff?

JA Yes, I have heard Mr Handels Messiah performed in St Pauls Cathedral. A most exhilarating experience. I sang so heartily with the chorus. I don’t like to complain but I must say, Mr Hendrix,  our house in Southampton is such a bother. The first man we hired to look after our garden was, in your parlance Mr Hendrix, not a cool cat.Our garden is now putting in order by a man who bears a remarkably good character, has a very fine complexion, and asks something less than the first.  The shrubs which border the gravel walk, he says, are only sweetbriar and roses, and the latter of an indifferent sort; we mean to get a few of a better kind, therefore, and at my own particular desire he procures us some syringas. We talk also of a laburnum. The border under the terrace wall is clearing away to receive currants and gooseberry bushes, and a spot is found very proper for raspberries.

JH Hey Jane  that sounds cool . Gardens are pretty neat. I love the smell of flowers. I love inhaling. My idea of a garden would be to have a swimming pool. I want to get up in the morning and just roll out of bed into a swimming pool. Swimming in a cool pool followed by some chic giving me a massage. Woo! I can just see it now.

JA A swimming pool? I don’t think I have ever heard of one of those. It sounds very interesting.Is it like the baths in Bath? As far as the inside of our house goes the alterations and improvements  advance very properly, and will be made very convenient indeed. Our dressing table is being constructed out of a large kitchen table belonging to the house. We have the permission of Mr. Husket, Lord Lansdown's painter -- domestic painter, I should call him. Domestic chaplains have given way to this more necessary office, and I suppose whenever the walls require no touching up he is employed about my lady's face.

JH. Hey Jane I love your wit. I could do with a bit of that  in my songwriting. I can just see the painter doing things to  my lady.

JA
May I ask, how is your latest musical endeavor proceeding Mr Hendrix? I must come and hear you when you next perform. I enjoyed the conflagration you started when you set your guitar alight last time I was at The Bag o Nails club, I think that was the place in SOHO? All that consternation and screaming. I wish we had balls like that  in Southampton and Bath. It was all so, humerous and enlightening. Such fun.

JA Oh Mr Hendrix I do like that title. Electric Ladyland. All my novels have ladys in them who wish to acquire lands. I am not sure I understand the term electric though. You must tell me some time over a ,"joint." That, is, what you called that stick of twisted paper with brown leaves inside, that I smoked with you? I really thought you were going to set me alight like you set your guitar alight. Ha! Ha!However, it did make me feel so good. I felt quite giddy and skittish. I went home afterwards and wrote a scene in my novel, Northangar Abbey. The heroine, Catherine Moorland,  begins to imagine all sorts of terrible things. I don’t think I could have created that scene without the profound influences that seemed to overcome my whole being smoking that ,"joint." What an unusual name, ,"joint."

JH.  I’ve just remembered. I’m looking for pretty girls to appear on the album cover of Electric Ladyland. Jane. Would you like to pose?

JA Oh Mr Hendrix, pose, I do not pose.But thank you anyway. I shall look forward to seeing the cover though.  It is a great delight to have met you once again. I do hope we shall meet again soon. Perhaps, as I said, at another of your concerts. Next time do refrain from smashing your guitar into the stage. You did look so aggressive and I know you are not at all like that.Such a sweet man.. I could almost write you into one of my novels. Now do keep the flaming guitar though. That is so jolly and of course warming to the senses and the excitement it causes is so great. What, is that you do, by the way, with your instrument sticking up from between your legs? You look so excited as you seem to polish the shaft.I really must go now.I have to get to Twinings before he closes.

JH I dig that Jane.

Oh, my mind is so mixed up, goin' round 'n' round_
Must there be all these colors without names,
without sounds?
My heart burns with feelin' but
Oh! but my mind is cold and reeling.

Is this love, baby


or is it confusion?

And so our two geniuses part. One to pay a fine for drugs possession and the other to pay a bill for tea,
As Jane crosses the road to Twinings door she mutters in a distracted sort of way.


Been down since I began to crawl


If it wasn't for bad luck


Wouldn't have no luck at all

Oh my goodness. Now where did that come from?  It just popped into my head.I must tell Mr Hendrix about it next time I see him.