DEATH COMES TO PEMBERLEY (so far) A REVIEW 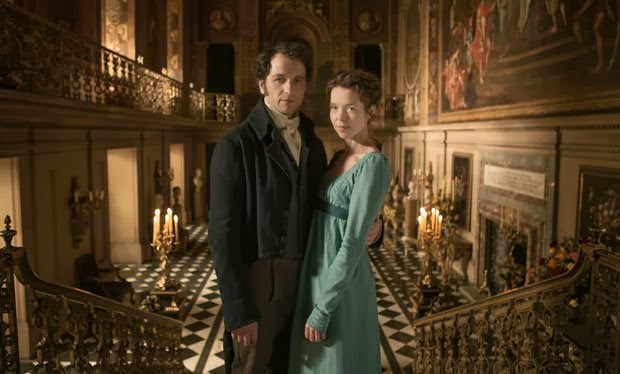 I am a die hard Janeite, but one who only reads the novels,her letters and the various biographies, as they come along. I have visited Steventon, Winchester, Chawton. I live in South London and daily pass by  sites that are connected with Jane Austen. I do not, as a rule, watch Jane Austen films or TV adaptations, unless I am caught out.

Last night I was caught out. I walked into the living room and Marilyn said, “Sit down. Its just starting. You’ll want to see this.” “See what?” “Death Comes to Pemberley.” So I did, for what I thought would be a glimpse. The programme began, episode 2, of this three parter. The background music is understated and the scenery is what you would expect of a Jane Austen. All that is in place but I immediately got a sense of a darkness about the look of it all. The colours of this production are muted with a certain dark quality to them. I would have mistaken it for being filmed in Autumn for its sombreness. However, I am sure it was not.
The filmic techniques are at first disorientating. Everything appears to be happening quickly. We are drawn into the picture with camera angles, close ups and low down shots. We intermingle with the characters and it makes us part of the action, almost a character in the scene. It feels like a three dimensional experience but it isn't. I immediately thought, how clever.

And then, as the action progressed, I thought, I’ve seen all this before. Trevor Eve, an excellent actor, plays, Sir Selwyn Hardcastle, a local magistrate who, because of the lack of any viable police force in the early 19th century, deputises his own team of detectives . Sir Selwyn plays the part of the detective for this murder mystery. On one level this can be seen as a simple, who done it, a straight forward murder mystery. Sir Selwyn appears to be an intelligent, thoughtful, worldly wise detective along the lines of an analytical Poirot or a mindful Miss Marples, who goes through all the usual detective at a murder scene procedures.

Well that’s it then, I thought. I don’t need to see any more, but suddenly I was caught irretrievably, hook line and sinker. This is so much more than a murder mystery. It is a fight for the continued existence of Pemberley. It depicts the struggles within relationships that have developed during the years since the last paragraph of Pride and Prejudice. These are developing lives and relationships in all their subtle rawness and insecurities.

Matthew Rhys has a studied, dark, serious handsomeness. He is ideal for this Darcy.  Fitzwilliam Darcy is under pressure. The tensions and struggles in his relationship with Elizabeth are evident. He is being torn asunder in his destructive relationship with Wickham.  Honour and family are of prime importance to him. Wickham is always on the verge of destroying or damaging peoples lives around him, including those of Darcy and Elizabeth. The management of the vast unruly Pemberley estate, the continuance of his dynasty,  all weigh heavily. His relationship with Elizabeth is no happy ever after marriage as might be inferred at the end of Pride and Prejudice. He is married to an assertive, as well as a loving Elizabeth. .All these elements are intermingled and focus on Pemberleys existence and future development. His sister, Georgiana's, possible arranged marriage involves negotiations  about the continuance of a strong Pemberley. On top of all this,Wykham's association with Darcy  could mean the removal of credit at the bank. Elizabeth is fighting for Darcy's aristocratic soul.

Elizabeth Darcy is played  by Anna Maxwell Martin. Nobody dare tell me she is too old for this part. She is magnificent, subtle, strong, gentle, perceptive and intelligent. She is almost  Jane Austen herself. She fights for the rights of women, well, Georgiana Darcy’s rights as a free woman because she witnesses her sister inlaw being coerced into a loveless marriage with Colonel Fitzwilliam. She argues with Darcy over the question of , family, and the rights of the individual. There are some perceptive flash backs to her own courtship with Darcy and its ups and downs. We see the tensions between a married couple ebb and flow with strong undercurrents. 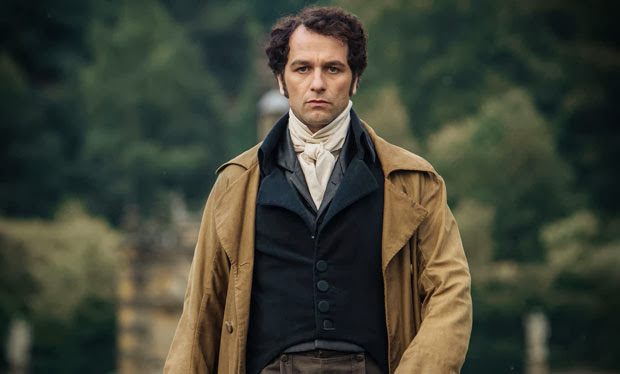 Lydia played by Jenna Coleman, is fantastic, grating, awful. She is the Lydia of Pride and Prejudice on steroids. She is sexy and gorgeous  but who on Gods earth would ever want to get near Coleman’s version of a pouting, ultra vain, over the top, attention seeking little hussy. Jenna Coleman has produced a virtuoso performance, but can your nerves survive? 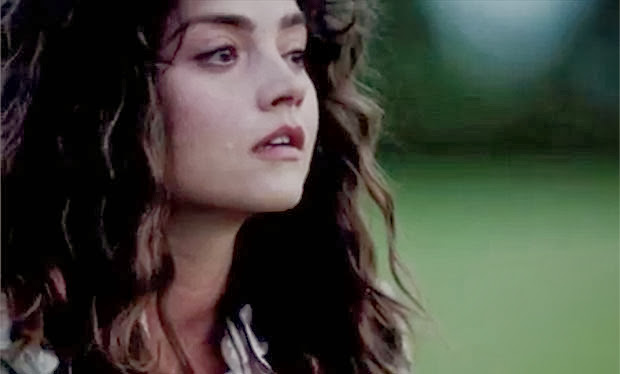 Mrs Bennet, who is played by Rebecca Front, creates a feeling of aversion too but not quite so much as Lydia. In the tradition of all great Mrs Bennets, she is a handful and the two of them, Lydia and Mrs Bennett, at one stage, are put in a carriage and driven away from Pemberley for their own sakes, and I suspect for the audiences sakes too, just to provide a little respite you understand, while the murder is being dealt with.

There are some laugh out loud scenes in this dark drama. The court scene, set in a coaching inn yard  has humour and pathos that creates a certain comic rustic quality such as the mechanicals in Shakespeare’s, A Midsummer Nights Dream. There are also the cottage scenes which could be straight out of a Thomas Hardy novel, The Return of the Native or perhaps Far From The Madding Crowd. The coaching inn yard is where Wickham is first tried.  This local magistrates court decides whether the case should go to The High Court. The locals adamantly, vociferously and dramatically, in a country yokel sort of way, find him guilty. So, to the high court Wickham must go. 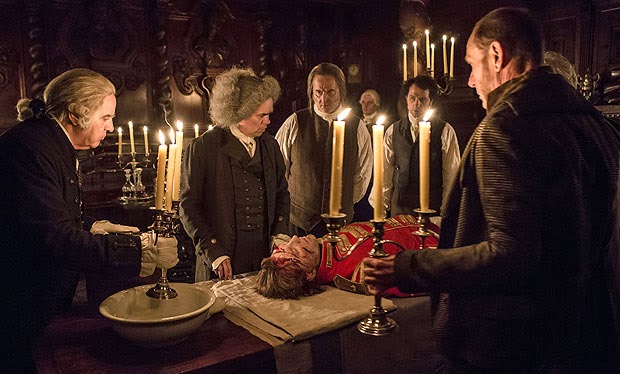 It matters not a jot if some of you worked out who the murderer is in the first episode. There are so many rich layers to the relationships. References to the novel, Pride and Prejudice with accompanying meanings, swirl about this mini-series. It is very worthwhile. It is so much more than a murder mystery.

As I have admitted at the start I am not one to watch TV and film adaptations, but this is good, very good and I bet, for those aficionados of the TV and the films, it is up there with one of the best and one of the most inventive.

I have not seen the first episode. I will watch the second and final episode and then I will go back to BBC i-player and watch all three from the first to the last. That is something, coming from me.

Have a great one. 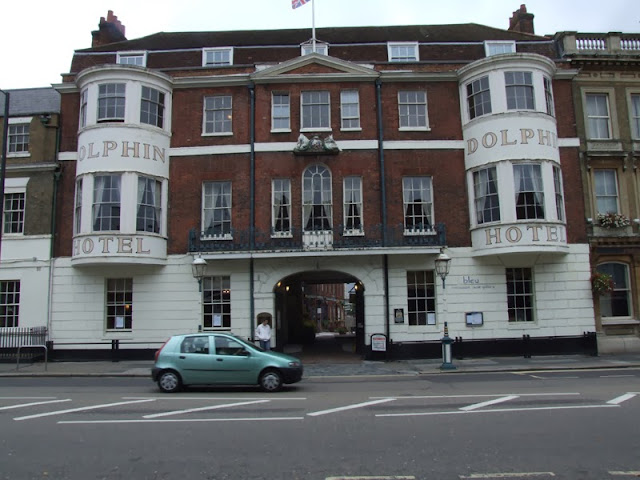 This is The Dolphin Hotel in Southampton where  on the 16th December 1793 Jane Austen celebrated her 18th birthday.

Fifteen years later, after moving from Bath and whilst living in Castle Square Southampton,with her mother, Cassandra her sister , Martha Lloyd her best friend and her brother Frank and his wife Mary, she attended another ball at The Dolphin.It was probably on 8th December 1808 because on the 9th December she wrote to Cassandra about it.  It was eight days before her 33rd  birthday.

Writing to Cassandra, who was staying with Edward in Godmersham Park in Kent, she said,

"Our ball was rather more amusing than I expected,Martha liked it very much,and I did not gape till the last quarter of an hour.-It was past nine before we were sent for,and not twelve when we returned.-The room was tolerably full,and there were perhaps thirty couples of Dancers;-the melancholy part was to see so many dozen young Women standing by without partners,and each of them with two ugly naked shoulders!-It was the same room in which we danced 15 years ago!-I thought it all over- and inspite of the shame of being so much older, felt with thankfulness that I was quite as happy now as then.-We paid an additional shilling for our Tea, which we took as we chose in adjoining,and very comfortable room.-There were only four dances and it went to my heart that the Miss Lances(one of them too named Emma!) should have partners only for two.-You will not expect to hear that I was asked to dance- but I was- by the Gentleman whom we met that Sunday with Captain D'auvergne." 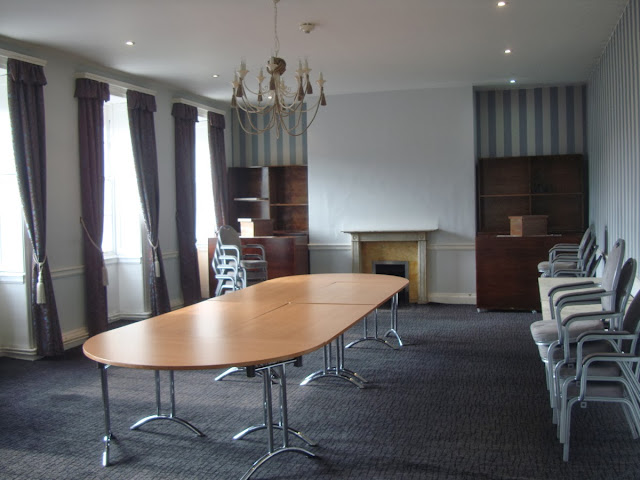 The ballroom in The Dolphin. 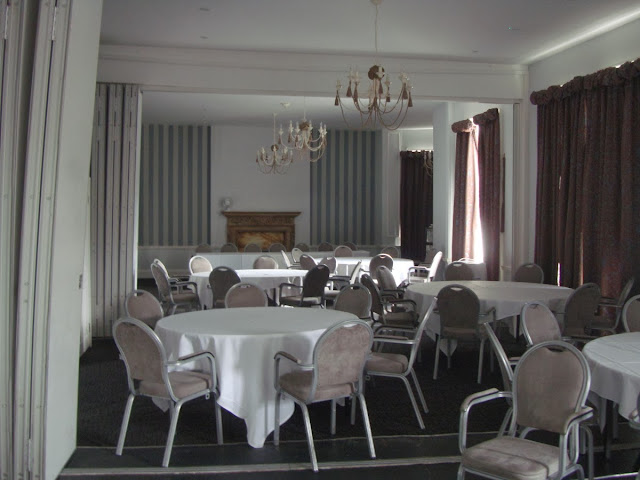 Another view of the ballroom today. 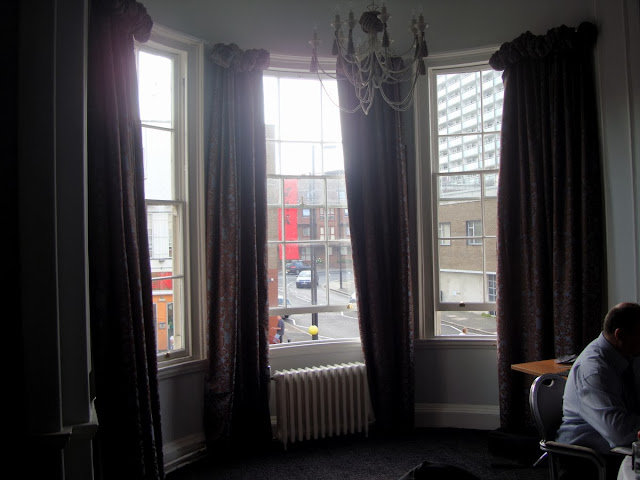 A view from one of the bay windows.