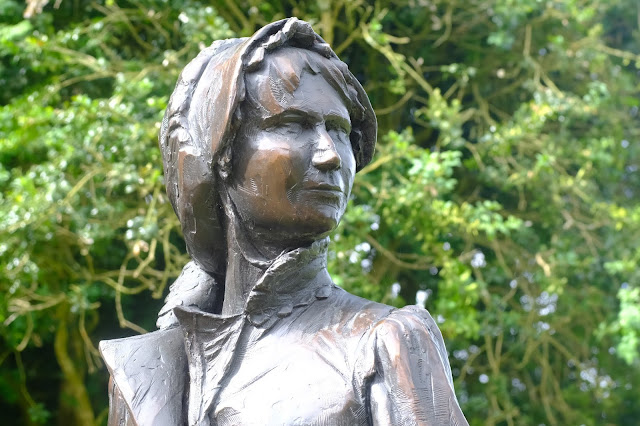 Jane Austen ( Her statue in the churchyard of St Nicholas, Chawton.)

Jane Austen has quite some legacy and it is ever increasing in diversity and scope.  Hollywood films, BBC TV adaptations, stage plays and what I term, "spin off novels," that mostly reinvent Fitzwilliam Darcy. There are, indeed, zombie versions of Pride and Prejudice. Many academics appear to be making a nice living from Jane Austen. Numerous societies have been set up. The original, Jane Austen Society, was founded in 1940 by Dorothy Darnell with the express purpose of raising funds to save Chawton Cottage, Austen’s last home.  Jane Austen societies are so well known they have become acronyms, JAS, JASA, JASBRA, JASNA. I think the most recent must be JASI, the Jane Austen Society of India. Japan and Pakistan have societies too. These are just the ones I know about.The various societies hold annual general meetings and produce online magazines. There are also Jane Austen Festivals around the world. The most important of all being the Jane Austen Bath Festival. Caroline Jane Knight, Jane Austen’s  5th great niece, has begun, The Jane Austen Literacy Foundation, to promote reading and writing in third world countries and in disadvantaged communities around the world.

Jane Austen’s books were written from her own perspective within the society she grew up in. Her father belonged to that educated strata of society that was both talented and productive but was not a landowner. He was a clergyman. To be a clergyman in the 18th century was not so much a religious calling more an occupation that an Oxford educated boy, who had very little inherited wealth and no inherited rank, could go into. It was a strata of society in the 18th century that was uniquely situated to enable a person to associate with many parts of society, aristocratic and poor. Jane had friends who were landowners and members of the lesser aristocracy but she also knew and associated with the poor in Chawton where she lived at the end of her life.
Sometimes the titles of Jane Austen’s novels describe the human aspects that the novel is going to discuss, Sense and Sensibility, Pride and Prejudice and Persuasion. Emma, is about an individual’s journey in human relationships, consisting more of failures than successes. Mansfield Park is a demonstration of how somebody honest, truthful, timid and perceptive can triumph. Jane Austen’s unfinished novels each explore different aspects of the world in which she lived. “The Watsons,” explores the social and psychological machinations of the, “ball.” “Sanditon,” is about the development of a new type of settlement during the 18th century, the seaside resort.  We still learn from Jane Austen through her novels.

Belfast during The Troubles.
This understanding of human relationships and the stresses and strains, traditions and attitudes that play as forces on these relationships are the message about writing that we should take from Jane Austen. It is women's writers of today who write about communities and women's experiences within those communities that carry on Jane's legacy today. The winner of this year’s Man Booker prize for literature, Anna Burns, wrote a novel called, “Milkman." It is set in Northern Ireland during, “The Troubles.” She describes her novel as ,” psycho political with rules of tribal identification.” A young 18 year old girl negotiates the difficult world of her community with its unspoken rules that if broken could get her killed and the male chauvinist patriarchal society that she exists in. If we think that the world of Jane Austen is hierarchical and patriarchal it has nothing on  Northern Ireland during, “The Troubles.” 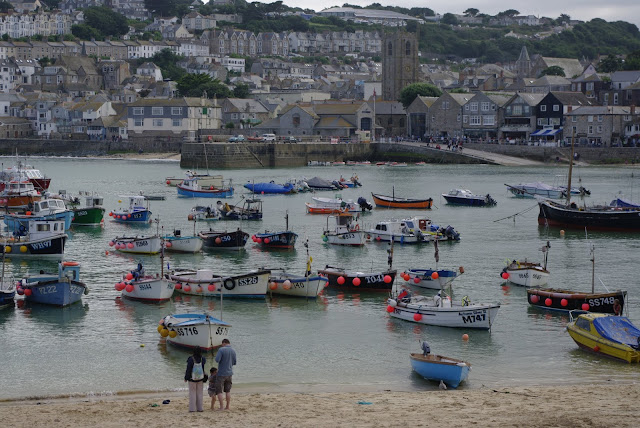 St Ives, Cornwall.
The world of the novelist is becoming less class ridden. Jane Austen wrote from a social position, as a lower middle class woman in the 18th century. She was reluctant to even have her name as, the author, on the first editions of her novels. Writers such as Natasha Carthew , a working class country writer from Cornwall,  writes about single mothers living on a council estate in Cornwall.We find the experiences and relationships in these novels applicable to our own lives.

Writing should  come out of all sorts of existences. Jane Austen produced writing, that was a commentary on the way people related to each other in her time. There was an honesty about what she wrote. I think she would relate completely with writers such as Anna Burns and Natasha Carthew writing today. 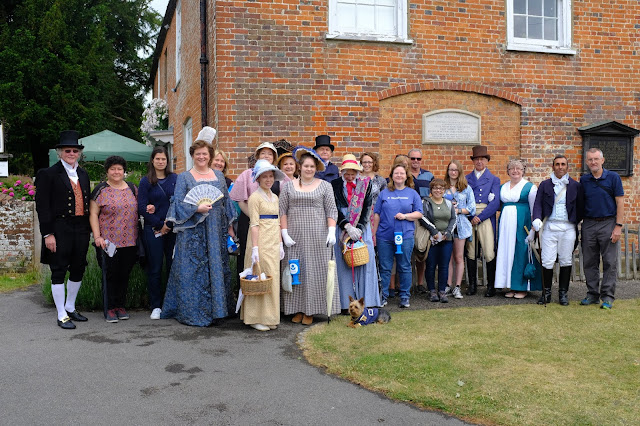 Setting out on the Jane Austen Literacy Foundation Walk.

Caroline Knight’s, Jane Austen Literacy Foundation is non profit making. Her aim is to make money to provide e-readers and e libraries to developing communities, such as Ghana. E-readers are a technology that can provide an extensive library of non fiction and fiction for children who have hardly any access to books. The teachers in these communities are provided with training. This is something that can increase  educational experiences and opportunities tenfold for these children. The foundation also provides volunteer literacy mentors. The role of a mentor is to support children with their writing. Through encouragement and making suggestions to help the children develop their writing skills, the young writers can grow in confidence and develop ,”a voice,”which can be heard by whoever reads them. Both these things, providing the e-readers and supporting children with their writing, are two ways that enable children to observe, reflect and communicate and this makes a difference and helps them develop as human beings. Jane Austen made a difference through words and writing. Caroline is continuing Jane Austen’s legacy in a meaningful way.

If all the Jane Austen societies around the world used the name of Jane Austen to help develop writers and readers from all parts of society, then they would be doing something really powerful and exceedingly useful. Authors, such as Anna Burns and Natasha Carthew  and also Jane Austen Literacy Foundation founder,Caroline Knight,  are the real Jane Austen legacy.

Note:
“The Troubles,”refers to a violent thirty-year conflict framed by a civil rights march in Londonderry on 5 October 1968 and the Good Friday Agreement on 10th April 1998.  At the heart of the conflict lay the constitutional status of Northern Ireland.

Books:
Emma, by Jane Austen, first published 1811, Published in Penguin Classics 1996
Milkman, by Anna Burns, published by Faber and Faber 2018
Only the Ocean, by Natasha Carthew, published by Bloomsbury 2017