So it’s sixty years since the Queen came to the throne after her father’s death in 1952, while she was on safari in Kenya with the Duke of Edinburgh. She became Queen on February 6th 1952, the day her father King George VI died. As soon as she heard the news in the house she was staying in whilst in Kenya the documents were presented to her to sign. She became Queen immediately.Her coronation was a year later, in Westminster Abbey, in June 1953. I was born in the very same year the Queen became our Queen, June 1952. The Queen's Diamond Jubilee, her sixtieth as Queen  and my sixtieth year, coincide. This means that for my entire life I have only known one monarch on the throne and she seems hale and hearty enough and ready to continue in her role as our smiling, benign, motherly face of Britain and The Commonwealth, for a few more years to come. Today, Marilyn, Abi, my youngest and I stood in an enormous crowd beside The Thames on the South Bank next to The London Eye. 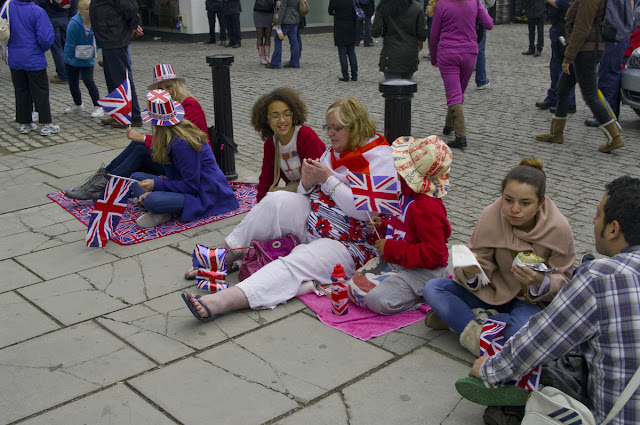 Having a sit down.

At 3.30pm the Queen and the Royal family, aboard the Royal barge sailed past amongst a flotilla of a thousand boats. I can’t say we saw the Queen or the flotilla but we experienced the crowds amazing warm and heartfelt outpouring of affection for the Queen. Flags waving, cheering, clapping and a great feeling of warmth and friendship pervaded the crowds as we watched on large screens the whole event that was happening a mere few yards away on the river. It was worth being there. 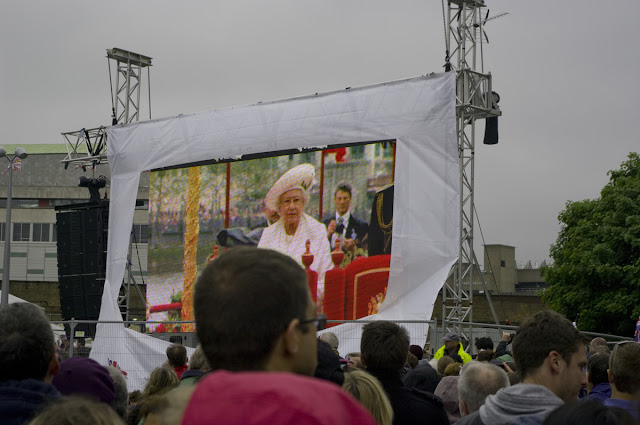 The Queen. " Good afternoon your majesty. I hope you are well?"

What has the Queen’s reign done for me? How has it shaped my life and made me what I am?

One of the main siren calls and professed aims of many of those governments over the last sixty years and accelerated by Tony Blair and the Labour governments he lead, is social mobility. Even our present coalition government of Tories and Liberals lead by David Cameron still mouth the mantra, “social mobility is our aim,” and, “ the highest quality of education for all,” even though many of their policies are going to create the opposite effect. Michael Gove, like all other ministers for education before him has wrung his  hands and anguished why it is still predominantly the upper middle classes and those from the wealthier families who get into Oxford and Cambridge. How can they possibly get more children from the working class into Cambridge? There is a minority who do already get into Oxford and Cambridge from a working class background but a very very small minority. And then, shock amongst many shocks some people still don’t aspire to higher things such as a great education. The government gasps, “Why not?” 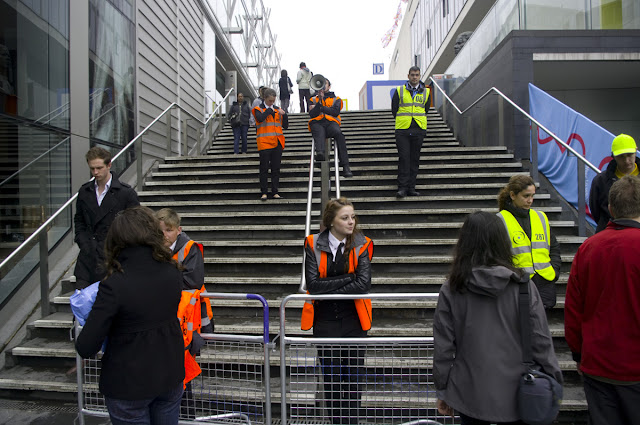 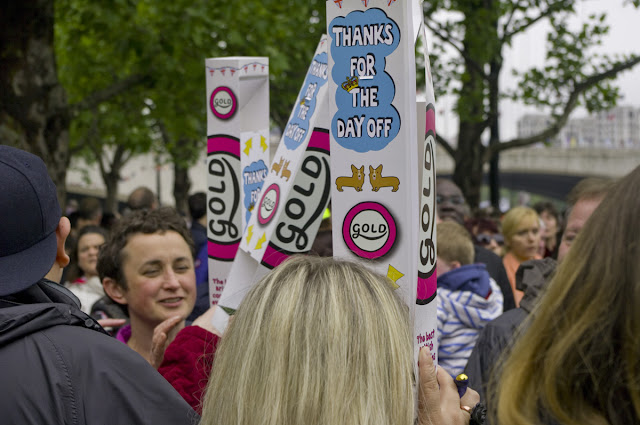 The ONLY way to see the Queen.

But what has this meant for me over these sixty years? Have the policies and opportunities offered by successive governments during the Queens reign made me  aspirational and socially mobile? Socially mobile always infers moving up, not down, by the way. Have I suffered a fracture between my upbringing and my present life because of different governments emphasise on social mobility? 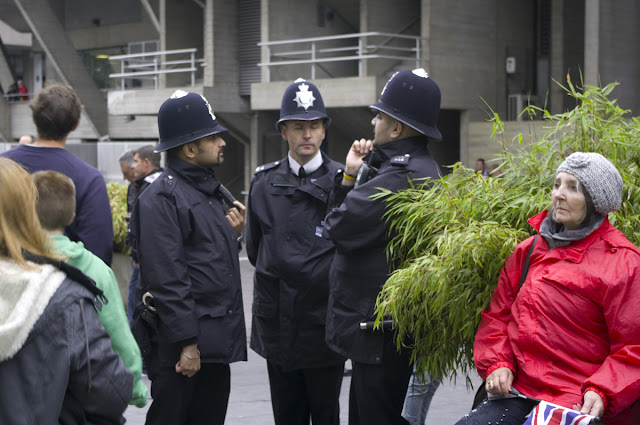 Some gentlemen of the constabulary.

In many ways I have shifted my social class. By getting a degree through the Open University and later a masters degree from The Institute of Education, London University, I have become middle class because of my educational achievements. One of my brothers got a degree before I did but I followed soon after and the two of us were the first to get university degrees in my family. My family always thought of themselves as skilled working class.  Getting degrees did not, however, create a cataclysmic rift between my brother and I and our family as happened to Rita, in Educating Rita, where her husband, friends and neighbours could no longer accept her. By getting an education she had moved sharply out of her social class. She spoke a different language. She felt and thought differently. Her family and friends had no aspirations away from the lives they lived. 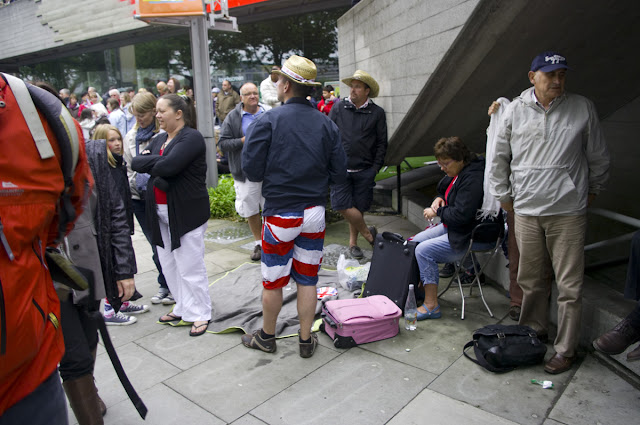 Just look at those trousers.

Education did not move my brother and I so sharply out of our social class. My father had studied hard at home in the evenings while working as an accounts clerk in an office and got his accountancy qualifications. My grandfather, on my mother’s side, had qualifications. He was a draughtsman in a shipyard. A great uncle of mine had passed his civil service exams. So being educated, studying and passing exams was always accepted in my family. Our family wanted my brother and I to be educated. We were not therefore fighting against our class or our social situation even if we were the first to get degrees. We were admired and the way we thought and our aspirations were an extension of our families’ aspirations for us. 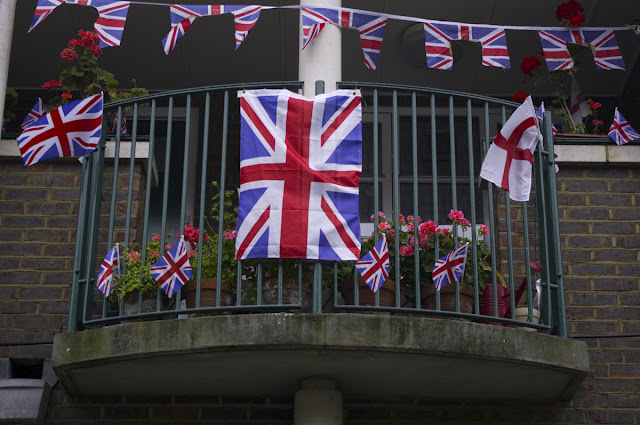 A decorated balcony just across the road from ,The Old Vic.

One of the greatest things educationally to move people on and bring a high standard of education within the grasp of all, has been the Open University, where I got my first degree. The OU was begun in the late sixties under the Harold Wilson government. To get accepted onto an Open University degree you need no prior qualifications. You have to show that you can write clearly and succinctly. The degrees are as academically rigorous as any other university degree. The degrees are as valuable and well regarded as any other degree. To achieve an Open University degree, you have to show and prove you can reach a good academic standard. This was the first real experiment with flexible further education in this country. Open University degrees are studied at home in the evenings after a days work. There are summer schools to be attended and nowadays, with broadband, there is immediate communication with fellow students, lecturers and tutors. Having a broadband connection also gives immediate access to resources. The degrees take longer to achieve because they are part time and they are divided into modules, which you can take one at a time and when they suit you. All universities offer flexible courses now. There are many ways to get a degree but the Open University was the first to try new ways. It is still at the top in this country as far as flexible degrees go and has been marketed worldwide. It has invariably ranked in the top forty universities in Britain and has always ranked in the top five hundred worldwide. Students globally can access Open University courses and gain degrees. The business school is the most popular in other countries. 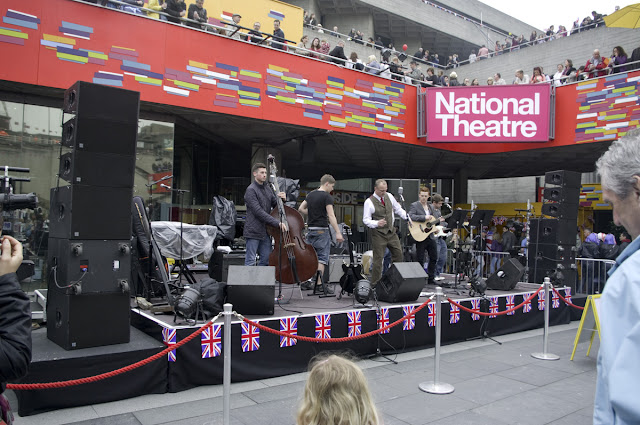 Live music at The National Theatre.

An educational revolution hatched by Harold Wilson under the control of Jennie Lee, who was the minister for education under Harold Wilson, has given confidence and unsought opportunities to many who thought they had no chance as well as those, like me, who did not get immediate access to a university course. 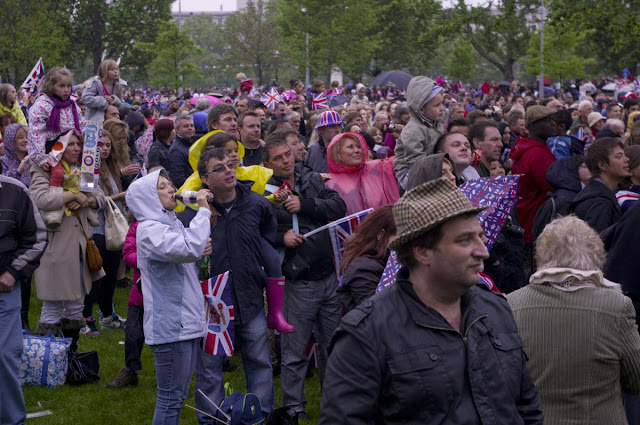 I think the Open University has provided a powerful force for social mobility in this country and has influenced social mobility worldwide. I think the opportunities offered by education and the education I have been able to access has been the main shaping influence on my life during the reign of our Queen. 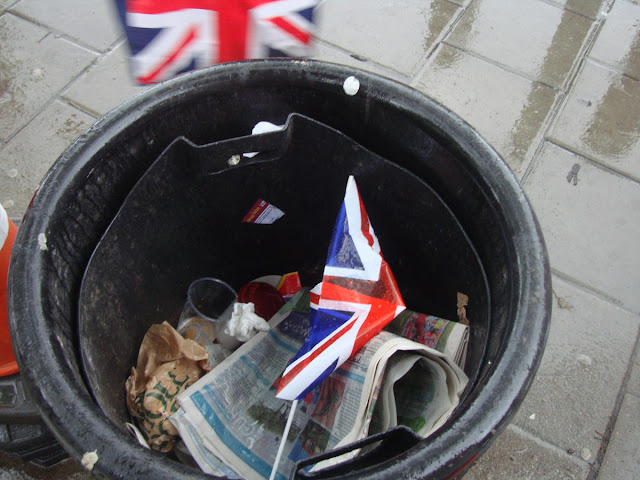 No more use for a union jack at the end of the day. 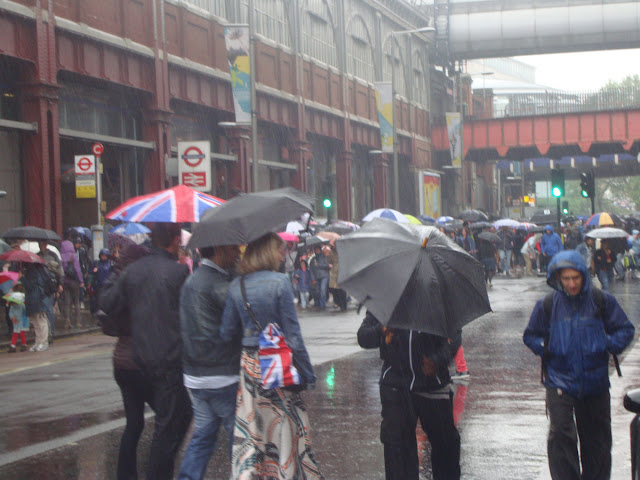