A VISIT TO BATH

Sometimes, among all the unwanted adverts, links and promotions that crop up on my i-phone, there  is something  of use. Recently Marilyn saw a one night deal advertised at The Royal Hotel Bath. That is not the Royal Crescent Hotel at the top of the city by the way. The Royal Crescent Hotel provides, I am sure, extreme luxury. Well, it should do. The cost of a suite for one night is £1000. The Royal Hotel is the sturdy building, designed by Isambard Kingdom Brunel and built in 1864, next to the main railway station located next to the River Avon. The deal was excellent. The hotel is three star but it offered a very comfortable experience. For £125 we had a well appointed double room with en-suite facilities. When we arrived we had a cream tea in the foyer. The evening three course meal began with a complimentary glass of champagne. The deal also included a full English breakfast. 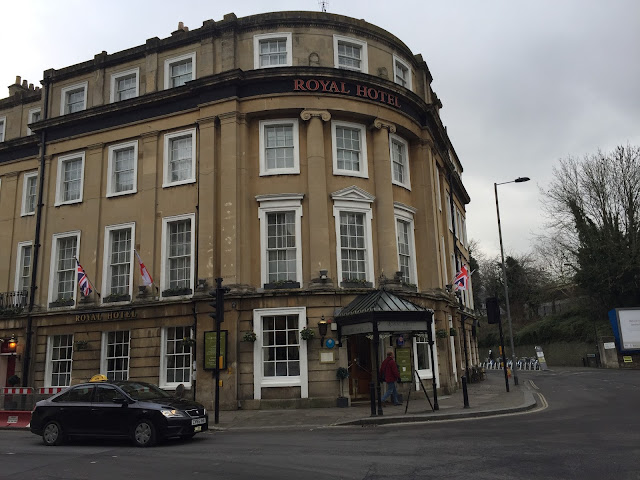 The Royal Hotel ,Bath. (Designed by Isambard Kingdom Brunel in 1846.)

The weather was cold but clear skied while we were in Bath. We  had to wrap up warmly.
We have been to Bath on a few occasions and we have seen the main sites before. This time we once again visited Bath Abbey and for the first  time visited the Roman Baths complex. There was quite a queue to get into the Pump Room for afternoon tea so we decided to miss that. We have been to the Pump Room twice before. We found another coffee shop nearby in the Abbey precinct. 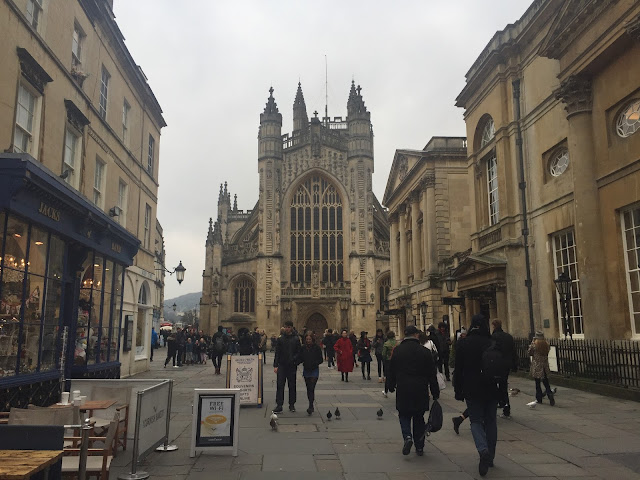 Bath Abbey with The Pump Room on the right.

Of course we walked past and along many of the sites in Bath that are connected with Jane Austen.When we arrived in Bath, we first of all parked in our usual car park, near the river, very close to Green Park buildings, and the house where The Reverend George Austen died on Tuesday 21st January  1805, Jane wrote to her brother Frank Austen, stationed on HMS Leopard in Portsmouth..

"An illness of only eight and forty hours carried him off yesterday morning between ten and eleven,"

After booking into The Royal Hotel we moved our car to the car park in Manvers Street next to the hotel.   I discovered that Fanny Burney , the playwright and novelist, a contemporary of Jane Austen's, lived in South Parade, next to the car park.

We later walked up Milson Street,

"They were in Milsom Street. It began to rain, not much, but enough to make shelter desirable for women, and quite enough to make it very desirable for Miss Elliot to have the advantage of being conveyed home in Lady Dalrymple's carriage, which was seen waiting at a little distance;..."  (Persuasion)

to Edgar Buildings, which features in, Northangar Abbey,

" Early the next day, a note from Isabella speaking peace and tenderness in every line and entreating the immediate presence of her friend on a matter of uttmost importance, hastened Catherine, in the happiest state of confidence and curiosity, to Edgar's Buildings."

We turned left along George Street to Gay Street and walked up the hill to The Circus, past number 25 Gay Street, a house the Austens stayed in after the Reverend Austen's death. From, The Circus ,we walked along Bennett Street to The Upper Assembly Rooms .

We had never been inside the Assembly Rooms before. They were spectacular. Jane Austen describes a number of Balls in her novels, Emma, Pride and Prejudice and Northangar Abbey. She also writes, in her letters to Cassandra, about the balls she and other members of her family, and friends attended.

Attending a ball in the 18th century had powerful social implications to the marriage market. Actually standing in the ballroom and seeing the tea room and the Octagon card room, I became much more aware of the social meaning of a place like this. The ballroom would have been set out like a sports arena with tiers of seating around the side.Mothers, fathers and often grandparents sat in these seats. The young participants, dressed for the part and tutored in every flirtation technique and intricate dance move, were on display in the middle on the dance floor using their hard won skills to attract a partner. Emma Woodhouse is jealous of Jane Fairfax, in Jane Austen's novel Emma because of her superior accomplishments. And in Pride and Prejudice the Bennett sisters practice their dance moves, honing them to perfection. It was a spectator event, the various members of the families assessing their daughter or son's performance and also assessing the opposition. Being there made me aware of how serious a ,"sport," all this was. 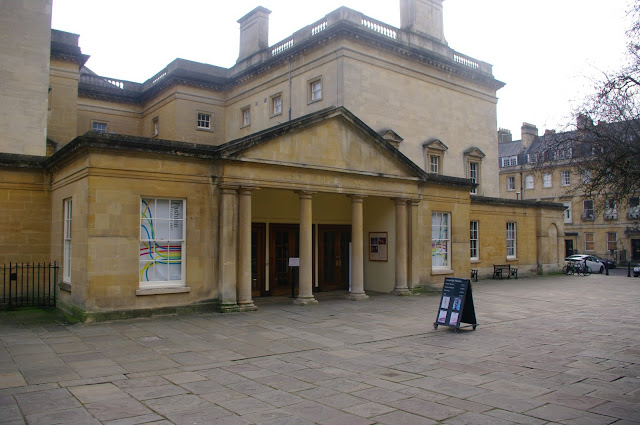 The entrance to The Upper Assembly Rooms. (Designed by John Wood The younger 1769)

In 1759 Thomas Gainsborough lived in a house in The Circus nearby the Assembly Rooms . It was not cheap to attend a ball. Living in, The Circus,Gainsborough, had access to the wealthy families who attended the balls and so was able to obtain portrait commissions more easily. Various masters of ceremonies oversaw the activities of the moneyed classes in Bath. Beau Nash, being the most influential and famous of these. He became master of ceremonies in 1704 and remained in bath until his death in 1761. He made sure the right people mixed together. He organised spectacular events in Bath which the rich and famous paid for.Gainsborough was favoured by Beau Nash and he and his family were given complimentary tickets to many of the Balls and events in Bath. In Northangar Abbey Henry Tilney and Catherine Moreland are introduced to each other by the master of ceremonies at the Lower Assembly Rooms, which no longer exist but were situated between the Abbey and the river.


"They made their appearance in the Lower Rooms; and here fortune was more favourable to our heroine. The master of the ceremonies introduced to her a very gentleman like young man as a partner; his name was Tilney. "
(Northangar Abbey by Jane Austen) 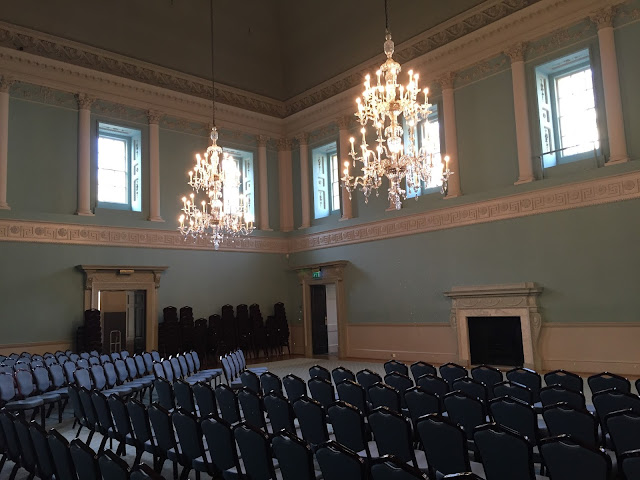 We walked around The Royal Crescent where Jane Austen and her contemporaries went for strolls conversing and showing themselves off to society. We also visited Number 1 The Royal Crescent,which is the first house on the Royal Crescent. It is furnished with 18th century furniture and artifacts.in the styles prevalent between 1776  and 1796. The guides in each room told us about the people who rented and lived in the house during this period. The aristocracy and the wealthy did not live in Bath all the time but usually rented properties for, "The Bath Season." 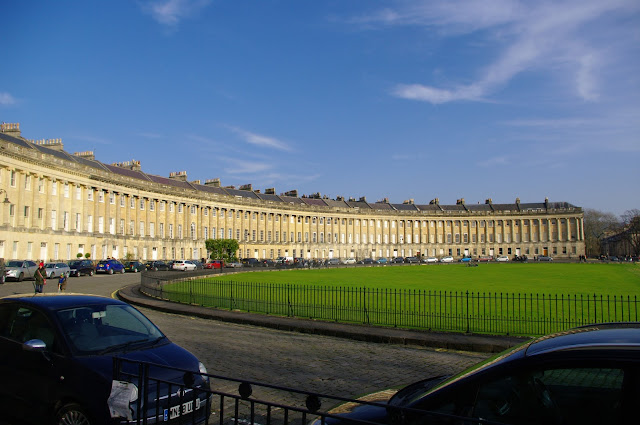 There is an area called The Northern Crescents in Bath which we had never visited before so we decided to do that. Bath is built on hills and to get to The Northern Crescents it is quite a steep climb that extends north of The Royal Crescent. We visited Landsdowne Crescent ,which is situated on Sion Hill. On Thursday 21st May 1801 Jane wrote to Cassandra describing a walk she made with Mrs Chamberlayne to Weston, a small village to the west of Bath, by way of Sion Hill. We also visited Somerset Place and Cavendish Crescent which are all spectacular examples of 18th century architecture easily comparable to The Circus and The Royal Crescent but perhaps on a smaller scale. We missed Camden Crescent which is further east of those crescents. Next time I go to Bath, Camden Crescent is a must. After all it is where Anne Elliot , the heroine of Persuasion and her father Sir Walter Elliot took rooms in Camden Place, nowadays known as Camden Crescent.

“a very good house in Camden Place, a lofty, dignified situation, such as becomes a man of consequence”
(Persuasion by Jane Austen) 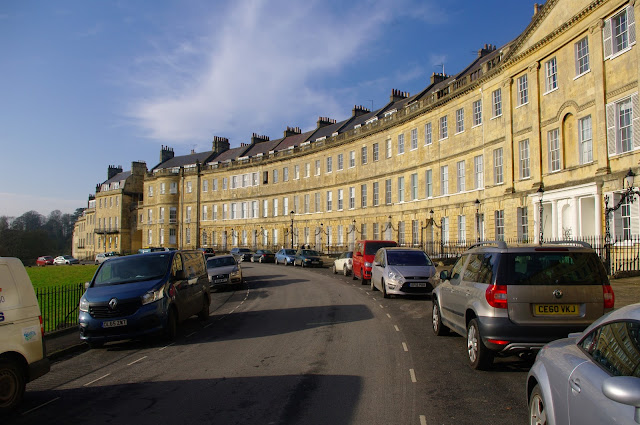 Pultney Bridge and  Great Pultney , is a very elegant, wide thoroughfare . It was here Catherine Moreland stayed in Northangar Abbey and where Anne Elliot caught sight of Captain Wentworth while out walking with Lady Russell.

"The following morning Anne was out with her friend, and for the first hour, in an incessant and fearful sort of watch for him in vain; but at last, in returning down Pulteney Street, she distinguished him on the right-hand pavement at such a distance as to have him in view the greater part of the street." 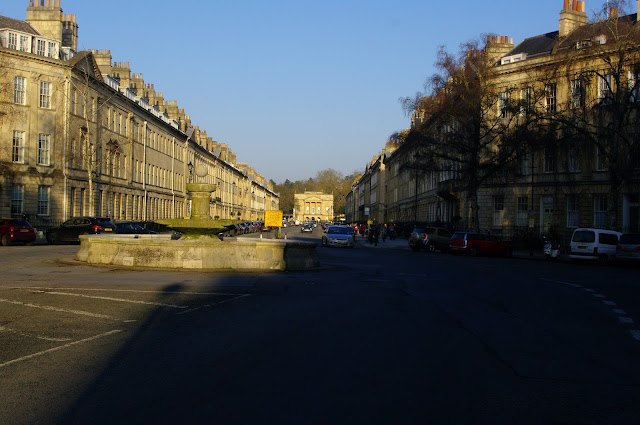 The elegant Great Pultney Street. ( designed by Thomas Baldwin and completed in 1789)

We walked the full length of Great Pultney and turned left into Sydney Place opposite Sydney Gardens and stood outside number 4 Sydney |Place, another house Jane Austen lived in. There is a plaque commemorating this on the house front. Not all the houses Jane Austen lived in have plaques on them. It was a little disconcerting to see two black bin liners, full of rubbish, tied to the railings at the front of number 4 Sydney Place but I suppose the rubbish has to be left somewhere on refuse collection day. 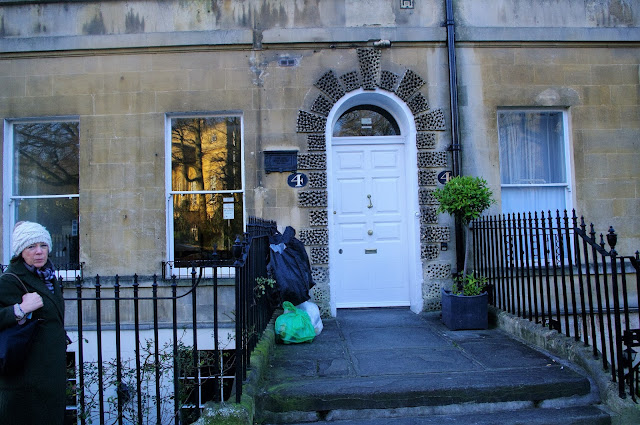 There is a rather awkward story about the time Jane Austen lived in Bath. After her father retired from his holding of the Steventon parish and when the Austens first moved to Bath they stayed at number 1 The Paragon Buildings,  with Jane's Aunt and uncle, James Leigh Perrott and his wife Jane. James was Mrs Austen's brother. Jane Leigh Perrot had been accused of stealing lace from a shop in Bath and had been prosecuted. How much of this Jane knew is speculation. 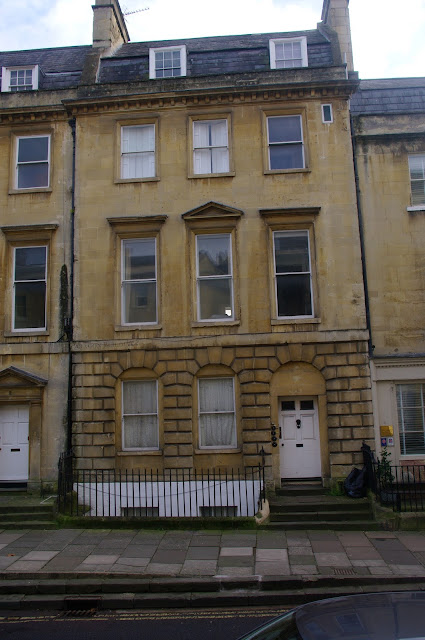 Marilyn and I walked  past The Paragon buildings noting number 1 and photographing the exterior. We walked on and discovered a house at the end of the row where the acclaimed 18th century actress Mrs Siddons had lived. At the end of the Paragon we came across St Swithuns church. It was here that Jane's mother and father were married on April 26th 1764  and also where her father,the Reverend George Austen, is buried.  What I found also interesting was that here, in St Swithuns churyard,  Fanny Burney, is also buried. She  influenced Jane as a writer. I have written about Fanny Burney and General D'Arblay, her husband, when they lived in Great Bookham in Surrey. The D'Arblays knew another Aunt and Uncle of Jane's, Samuel and Cassandra Cooke. The Reverend Samuel Cooke was the vicar of Great Bookham Church.Cassandra Cooke, nee Leigh, was one of Mrs Austen's cousins. 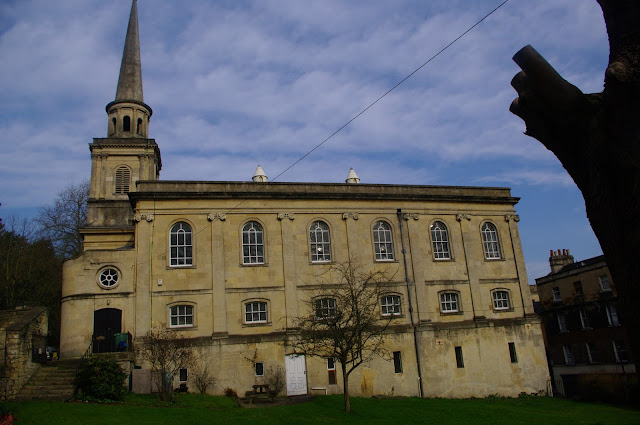 Seeing Bath through the eyes of an Austenite you become acutely aware of how Jane Austen used the city, not just as a setting for large parts of Northangar Abbey and Persuasion but how the social meaning of where characters lived, who they met and what they did in Bath,  provided meaning to the novels. Looking down Milson Street where Jane Austen and many of her characters walked and shopped.

It sounds very much like our trip to Bath was all about the Romans, Georgian architecture and Jane Austen, but it really was about having a great time together, just the two of us.