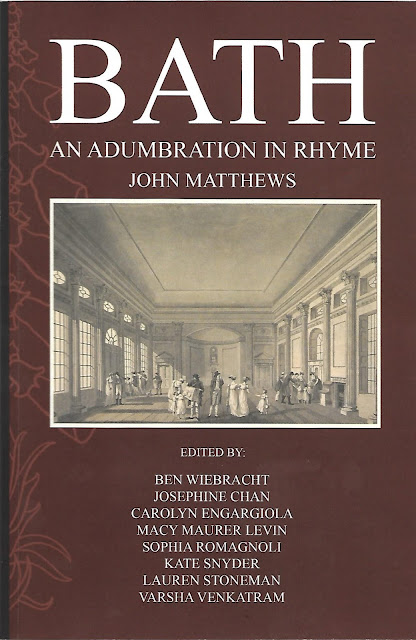 Ben Wiebracht of Stanford Online High School , Stanford University, is the series editor for the “Forgotten Contemporaries of Jane Austen.” In this first editon of the series Ben is the co-editor  along with seven of his students, Joe, Carolyn, Macy, Sophia, Kate, Lauren and Varsha. They chose to investigate a poem by John Matthews (1755 – 1826), a contemporary of Jane Austen’s, that relates  a day in the life of somebody enjoying the delights of  Bath in the 18th century. The inspiration for this book was an article Ben and his students co authored for ,"Jane Austens World," blog entitled, “A Day In Catherine Morelands Bath.” This edition begins with an introduction to the series explaining the premise, that this series, “ strives to see Austen in the same way that Austen saw Elizabeth and Darcy , in Pride and Prejudice and also to uncover some of the Gardiner’s (Elizabeth’s aunt and uncle) of Austen’s world.” In a sense it is an attempt to see people and characters of the 18th century in a context that helps us in the 21st century  get at least a glimpse of how life and people would have actually been in the 18th century. Ben and his students, by comparing Austen and Matthews, provide us with an insight into their thoughts, attitudes, interests and actions . Something historians, film makers and us  readers try to do when we immerse ourselves in Austen.

Ben and his students use the Gardeners, as an example of the type of people, middle class, and quietly influential ,rising in society  and who’s importance is not at first apparent  to the plot,  as a template for the type of people they want to write about. It is the Gardeners for instance who influence some of the main action within Austen's novel , but on the surface appear to be ancillary characters. At the end of the novel they are shown appreciation  by the  main protagonists. Ben and his students quote the finishing lines of Pride and Prejudice,

“With the Gardeners, they were always on the most intimate terms. Darcy as well as Elizabeth really loved them…. the persons who, by bringing her to Derbyshire, had been the means of uniting them.”

In many ways this series is about getting under the skin of the everyday people who make the wheels of society work. 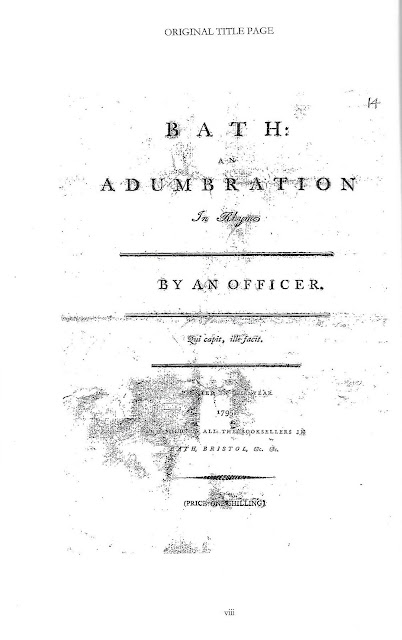 I think  this first edition, “Bath: An Adumbration In Rhyme,” is ground breaking work. First as I have mentioned above it is an attempt to allow us to experience the 18th century at a deeper level.  Also from the teaching point of view Ben has given his students a purposeful aim. They are not merely writing an academic essay, introduction, key points with evidence and explanation followed by a conclusion , the usual academic essay format written for a tutor and never read again, a dry formal process.   Through the creating of this book ,Ben has given his students the opportunity to add something meaningful and important to  our understating of Jane Austen and the 18th century. The editing team have gained valuable experience in researching, and choosing key evidence. They are also assured of providing continued pleasure and gained understanding for their readers to come. 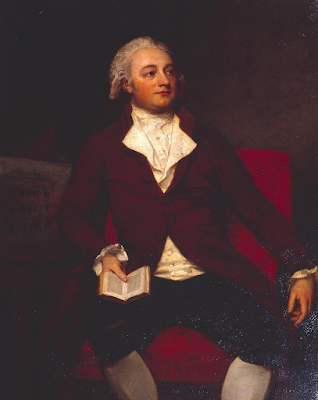 I have read  Matthews poem previously but knew very little about him apart from the obvious that you can glean from his poem that the writer was part of the well to do, educated middle classes. The activities and days events Matthews describes in his poem need money to participate in. The fact that he is a competent poet, I won’t say a great poet, and references Latin quotations reveals that he is educated to the highest level of the 18th century. Ben provides us with a  biography of Matthews. He was born in Herefordshire in 1755 and appears to have lived in Herefordshire for the rest of his life. He was also very lucky, or very canny, as far as money and fortune goes. He married a wealthy heiress Elizabeth Ellis and later in 1784 an elderly spinster Elizabeth Skinner left him her fortune of £80, 000. That was an enormous amount of money in the 18th century. He was a rural gentleman in the top 5% of the population. He was educated at Eton and Oxford. He took up a medical career at St Georges Hospital in Westminster London and later became a member of the Royal College of Physicians. He built a large estate in Herefordshire. He funded charities. He founded and commanded the Herefordshire Volunteer Corps in 1798. In 1793 he was The Mayor of Hereford and in 1803 he represented Hereford in the House of Commons as their member of parliament. His poetry appears to have been a form of relaxation and escape. He published mostly anonymously. And, what I like particularly about Mr John Matthews is his ability to be self-deprecating. One of his more well know poems is about Cloacina the Roman Goddess of sewers and apparently he thought of his own publications as worthy of being used as toilet paper. I think he is being harsh on himself in writing that but you have got to smile or even have a laugh along with him.

(As an aside, St Georges Hospital eventually moved to Tooting in South London in the 1970s. It is a university hospital and just happens to be my local hospital.)

Matthews attitudes to society , his rejection of democracy as pursued  by The French Revolution  and his opposition to the levelling of society are all suggested in the poem. A comparison to Jane Austens attitudes to class and movements between classes can be made . For instance the attempts of Isabella Thorpe to marry up, the misguidedness of Emma Woodhouse trying to marry off Harriet Smith and Catherine Moreland’s relationship with Henry Tilney.  Austen was testing the boundaries between classes whereby Matthews merely disagrees with the blending of society.    This shows Matthews as a man of his time,  conservative in his beliefs and with little  desire for the world to change.


As  a poet his style was boisterous and earthy. It is pointed out  that many of Matthews views are shocking to our modern sensibilities. His cruel lampooning of spinisters for instance, who came to Bath just to enjoy themselves and have a good time.

His poetry  catches us out by making quirky contrasts, This is an example from The Adumbration,

”So the beaux in their boots, the belles in their slippers

Come to walk up and down and peep at the dippers.”

Something elegant turns into something salacious and saucy. He has a naughty sense of humour. I think this appears again when he is walking up, or down, Milson Street.

“When you’ve with politics done, the beauties to meet,

You may stroll for an hour up and down Milson Street

Where the misses so smart, at ev’ry fine shop.

Like rabbits in burrows, just in and out pop,”

Burrows, rabbits;  this is suggestive of the sexual appetite of rabbits of course and the ,”misses,” are there just for breeding. The misogyny is palpable. We can find further examples.

Later, the Victorian music hall tradition and the advent of the Victorian seaside piers with their peepshow machines, “ What the butler saw,” are further example of this saucy earthy humour. It took generations to become unacceptable. Our cinema was at a low point, depicting this saucy humour, up to the 70s with the very popular ,”Carry On,” series of  films. British seaside postcards had this saucy side to them also before women’s groups and society as a whole decided they could not tolerate this blatant misogyny and sexism any more. Matthews was an early protagonist of a very long tradition of British earthy humour.

What I found most interesting in the discussion about Matthews poetry was the analysis of the poetic structures Matthews uses. The rhythm is an anapaestic rhythm rather than the more common iambic pentameter. If we think of the iambic pentameter in terms of our heart beat, our most personal rhythm, it is the essence of our life.  Shakespeare and all the great poets use it. Comedians on the other hand tend to disrupt natural rhythms to catch us out. The anapaestic beat is our heart beat with an extra soft beat catching us out, almost tripping us up. It lends itself to satire and humour and this is what Matthews uses.

Matthews himself had been influenced by the first writer of these type of  Bath satires,  a gentleman called Anstye who wrote, “ The New Bath Guide,” a similar sort of satire to Matthews  and from which Matthews probably drew inspiration.How much Austen herself was influenced in her writing by both Anstey and Matthews is open to debate but there are strong links.What I find that connects Austen, Matthews and also Anstey strongly is the geography and  the geology  of Bath.  Matthews describes a day in Bath , meeting friends and acquaintances at The Pump Room where the health giving waters from the spring could be drunk,(although Matthews is not sure about the health giving properties of the water for certain reasons), shopping on Milsom Street, walking around The Royal Crescent and Landsdown Hill, and attending balls at the Assembly Rooms in the evening. The landscape, buildings, venues, activities  are  the same as we find in Persuasion and  Northanger Abbey. Some of the types of characters can be compared too. The difference being is how Austen  makes them live as flesh and blood through their interactions and  their humanity.  In contrast the essence of Matthews and Anstey is the superficial with amusing anecdotes, about people in general. 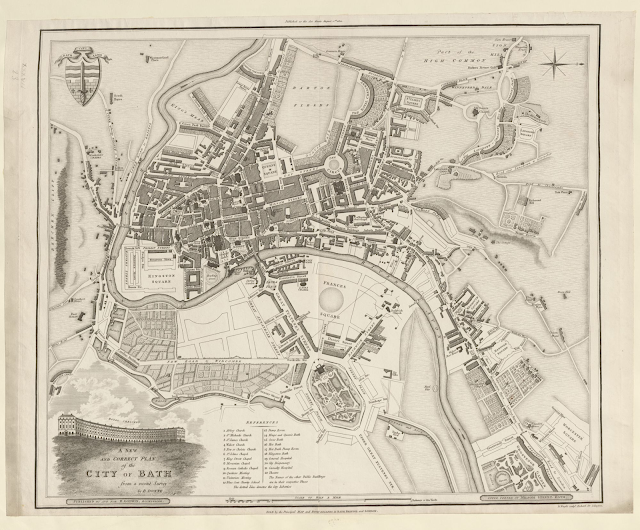 A map of Bath published in 1810 created by Benjamin Donne and David Wright.

Ben and his students have kept the somewhat archaic spellings and punctuation where  the metre and rhythm would be affected if these were changed. Our understanding is not hindered though. Some words and punctuation have been modernised to help us where it doesn’t affect the flow.

The annotations to the text Ben and his students have produced are excellent. As we read through this edition the left hand page is Matthews poem and the right hand page are the annotations explaining words and phrases and providing detailed information. Also, alongside the annotations are references to  Jane Austen  where they are  applicable,  referencing Persuasion and Northanger Abbey. This is the first time this has been done with this text. It extends our understanding of 18th century Bath and also illuminates Austen's achievements.

This is a wonderful piece of work. I can’t wait to read the other editions referencing other authors  from the time of Austen.  I certainly feel that my understanding of Austen’s works and her world has been enriched by this first edition.

Vic Sanborn at Jane Austen's World has also written a review of this edition. We both had some input into Ben's work with his students, Vic more so than myself.

You can buy the book at Amazon UK:

A DAY IN CATHERINE MORELANDS BATH