The Honourable Charles Hamilton was born in 1704, the ninth son and one of fourteen children of the Earl of Abercorn. The 6th Earl, Charles’s father, was at his accession an Irish baronet, "of Dunalong in the County of Tyrone, and of Nenagh in the County of Tipperary.” He was additionally created Baron Mountcastle and Viscount Strabane, in the Peerage of Ireland, on 2 September 1701. The 7th Earl, Charles’s oldest brother, became the first of the Earls of Abercorn to be invested a Privy Counsellor, having been appointed to both the English and Irish Privy Councils. Charles, being the ninth son, was somewhat down the pecking order as far as inheritance went. However, his father did provide him with the very best education  which should have honed his talents and provided him with substantial opportunities to be successful, and indeed he had great imagination and boundless ambition. Charles Hamilton went to Westminster School and then on to Oxford University. 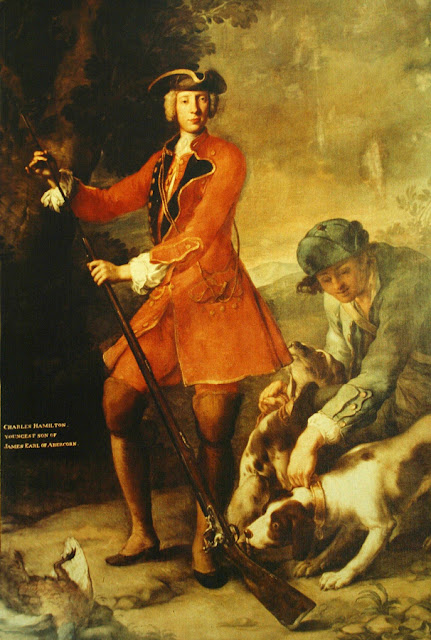 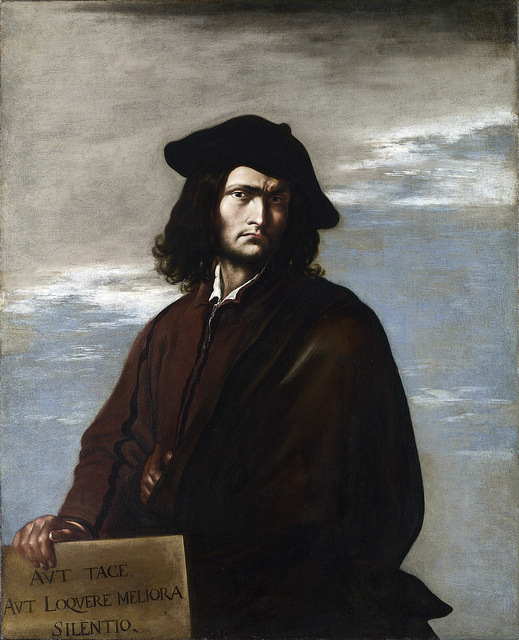 In 1738, arriving back in England from his two tours of Europe, he acquired land near Cobham in Surrey, which included a stretch of the River Mole, which, incidentally, reaches the River Thames beside Hampton Court. It was here that Charles Hamilton decided to put into practice his love of natural landscape and deep interest in the varied flora found around the world. He became a member of parliament and was on the staff of Frederick, Prince of Wales. He had some well paid jobs which enabled him to get started on his Painshill project but he also borrowed heavily. For the next thirty five years he dedicated his life to creating a vision of beautiful and emotional landscapes. Charles Hamilton had one of the qualities most prized in the 18th century and is probably a quality prized today. He had, “taste.” 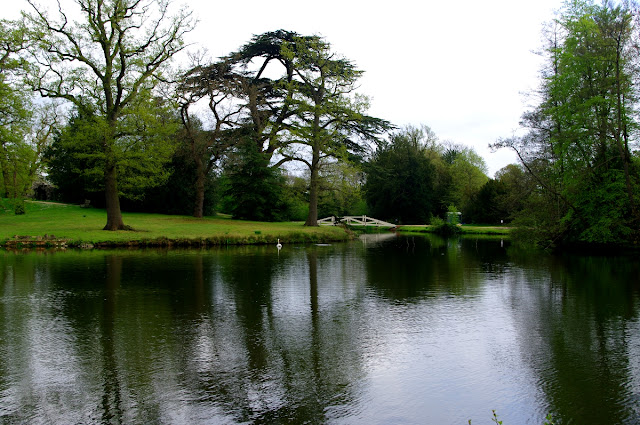 Nicolas Poussin (15 June 1594 – 19 November 1665) was the leading painter of the classical French Baroque style. It is quite something to think of Pousin as an influence on Charles Hamilton’s ideas for Painshill Park. Many of Pousins rural pictures show shepherds and sheep within vast landscapes of rocks, rivers and beautiful trees placed in such a way that they look natural occurrences but reveal shimmering  close and distant views. You can also see this same depiction of landscape in the pictures of Claude Lorraine . (1600 – 23 November 1682 )also a French painter of the baroque period. However one of the main differences between Pousin and Claude Lorraine is that Pousin painted many nude portraits of beautiful women, goat like, dark complexioned men leaning over  and admiring them. The ladies themselves are often asleep leaning backwards over pregnant mounds of grass with legs wide apart inviting scrutiny. Perhaps Charles Hamilton had other ambitions apart from the effects of landscape at Painshill? The follies he created are a series of moods and situations set within these Pousin and Claude style landscapes. Perhaps some of the parties he held in his grounds did lead to debauched episodes too. Charles Hamilton, some money in his pocket, bright, intelligent, well educated, travelling throughout Europe, one can well imagine him experiencing all the different cultures and situations he came across.

Salvatore Rosa’s landscapes are very similar to those of Pousin and Claude Lorraine's except that they portray Italian scenes. It was Italy that ultimately influenced Hamilton in his positioning of his, “ruins.” There is a self-portrait of Salvadore Rosa in the National Gallery in Trafalgar Square. It is one of the most striking self portraits you will ever see. It shows a young man dressed in a black cloak and wearing a black tricorn hat jauntily angled on his head. The face is of a young man but one full of concerns, frowning and deep in concentration. He is intelligent and brooding. You cannot but help engage with this portrait.If the two met I should imagine they complimented each other well, having similar personalities.  Charles Hamilton was as deeply thoughtful, driven and intelligent, fighting his demons like Salvadore Rosa . 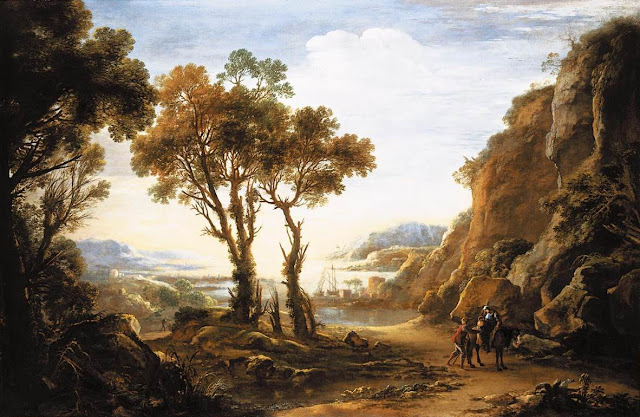 Charles Hamilton arrived at Painshill in 1738 and he set about his ambitious venture. He wanted plants from all over the world to give variety of texture, shape, size, scent and colour to his garden.
The 18th century brought about a period of plant mania. Wealthy aristocrats prized seeds and plants from all over the growing British Empire. The Tradescants, father and son, in the early 1600’s had already explored Virginia in America and various other locations to obtain plant specimens. Phillip Millar at Chelsea Physic Garden published the “ Gardner's Dictionary,” in 1731 and we know that Charles Hamilton had a copy of it. Plants and seeds came from Europe, Asia, the Far East, South Africa and North and South America as Britain expanded its trading influence and power. The gardens at Kew received a lot of these plants and seeds and its botanical reputation began to grow. Christopher Gray, the gardener for the Bishop of London at Fulham Palace bought plants from around the world and advised Charles Hamilton on his purchases. Hamilton also corresponded with the Abbe Nolan who was a gardening adviser to  Louis XV’s gardener at Versailles. 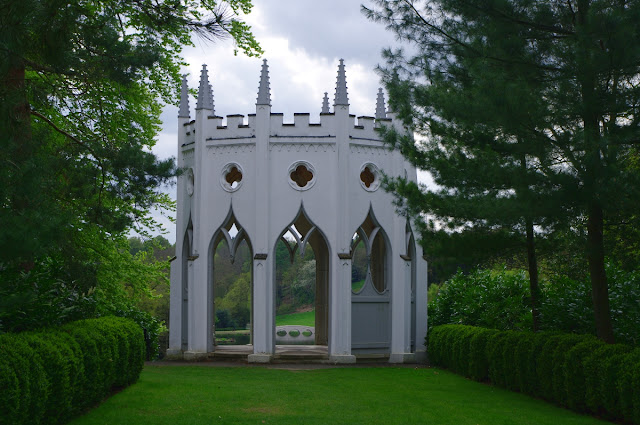 One of Charles Hamilton’s seed source was the businessman Peter Collinson(1694-1768)who was the London dealer for John Bartram (1699-1777). Bartram and Collinson had a trading relationship for over fourty years. John Bartram was born in Pennsylvania and became a self-taught botanist. Peter Collinson was a cloth merchant and passionate plantsman but he was also a Quaker. His Quaker connections gave him links to the Quakers in the emerging states on the East Coast of America. He met and associated with John Bartram who was a Quaker too. Bartram felt a great affinity with nature and flowers and plants. He roamed the whole of the east coast of America from the Mountains of Pennsylvania, the coast of New Jersey, Lake Ontario, Virginia, the Carolinas, Georgia and down as far as Florida. He travelled in the autumn when the harvest had been gathered and trees, plants and shrubs were ready to drop their seeds. He often travelled with indigenous Indian guides and on more than one occasion his life was in danger.He had to contend with rattle snakes, bad weather, rough and treacherous terrain and Native American and French raiding parties against the English settlements. His native guides were able to show him the best places to obtain seeds as well as guide him on his journeys. He was a true scientific explorer.


John Bartram would send his seeds to Peter Collinson who held a living at Mill Hill, which is now situated in the London Borough of Barnet in North London, about fourteen miles from Charing Cross. Collinson kept a living collection derived from Bartram’s seeds. He sold on Bartram’s seeds to rich merchants and land owners who wanted to develop their estates and of course his main customers were the aristocracy who prized new varieties of plants shrubs and trees for their vast estates. 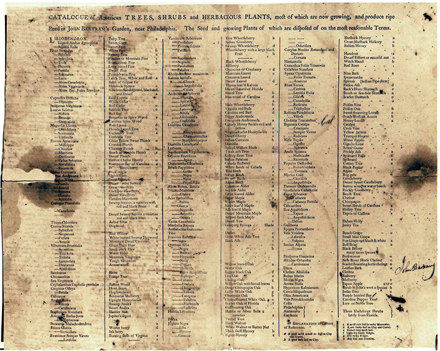 Charles Hamilton was one of Peter Collinson’s main customers. There is evidence in a large quantity of letters and receipts. He received his first Bartram box of seeds in 1748 and then a second supply of seeds in 1756. Collinson also worked with Hamilton on developing Henry Fox’s estate at Holland Park. We also know that Hamilton bought seeds from Alexander Eddie who owned a seed shop in The Strand. His bank statements for 1760 show Hamilton paying Eddie for seeds.

Collinson supplied the Chelsea Physic Garden, which was interested in the medicinal properties of plants and shrubs. Kew Gardens received seeds from him. James Gordon, who by germinating and propagating seeds, turned Bartram’s rare American plants into affordable items. John Bartram also sent seeds to the Swedish botanist Linnaeus who developed a system of naming plants which is still used today. He used Latin as a universal language to do this. Linnaeus wrote that he considered John Bartram as the greatest botanist of his age. 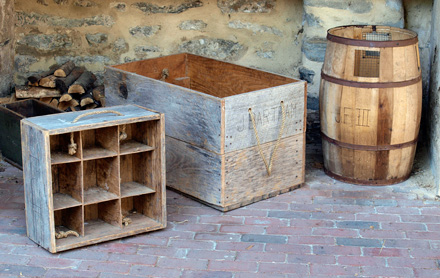 There was a problem in getting plants back to Britain from America in the 18th century. It was a dangerous enterprise. England was at war with France and there was always the chance that trading ships might be captured. Also there was a matter of storing and packaging the seeds and plants. Plants needed to be watered and cared for on a trip that might take three months. Bartram invented a box system for live plants which kept them safe from damage and allowed them to be watered regularly. He also designed a barrel with different sections for storing loose seeds. The partitions would be layered with moss. Rare seeds might be wrapped individually. 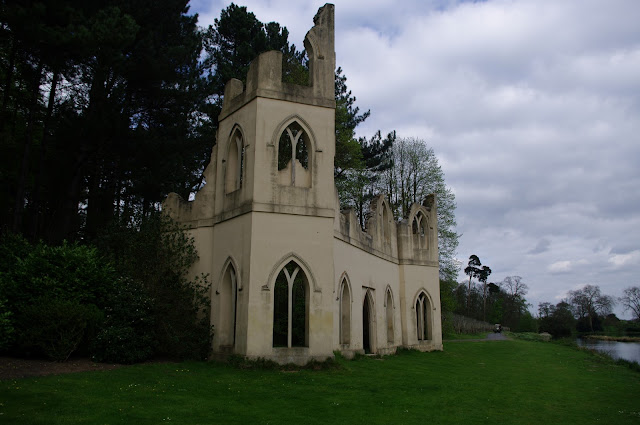 The ruined abbey at Painshill Park


Hamilton had problems with money. He borrowed extensively and eventually in 1773 his debts became too much and he had to sell Painshill Park. Painshill then had a succession of owners who took care of Hamiltons original design and garden plan. The gardens survived into the twentieth century unchanged from their original form. However from 1949 it suffered neglect. Parts of the estate were sold off for farming and it became dilapidated and overgrown. Some of Hamilton’s original structures collapsed or disappeared. Elmbridge Borough Council bought the estate in the 1970’s. In 1981 the Painshill Park Trust was incorporated and the council granted the land to the trust on a 99 year lease. It was thought that the grounds could not be salvaged and restored but with great efforts it has been returned to its former glory and is still being developed and restored. 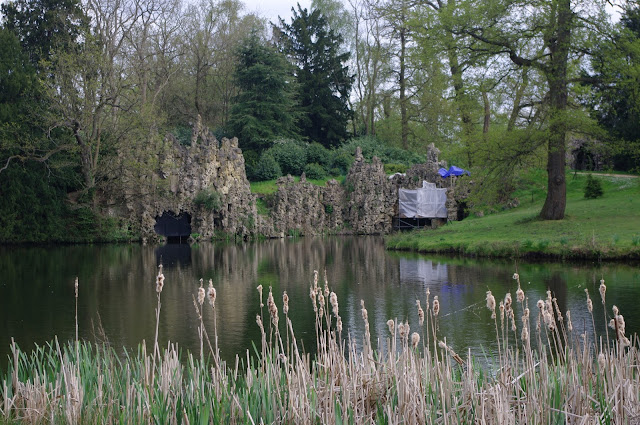 Last Sunday during our May Bank Holiday weekend, Marilyn, my wife, myself and Abigail our youngest daughter visited Painshill Park and spent a few glorious  hours walking around the grounds and enjoying the beautiful scenic vistas and experiencing the scenes and moods that Hamilton created with his original park layout. We stood within the Gothic temple on a hill looking out over the lake with its low arched stone bridge spanning one end and with the great Turkish tent positioned high on an opposing hill. We walked around the lake and crossed the Chinese bridge. 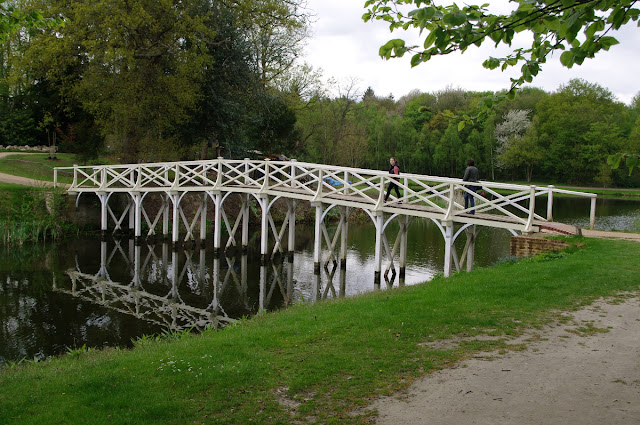 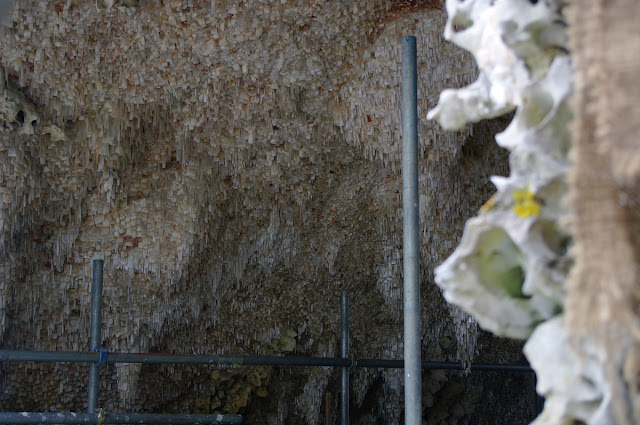 The crystal ceiling in the grotto.

Some of the original trees planted by Hamilton are still there. Europes tallest cedar of Lebanon stands majestically viewed from many parts of the estate. There is a Spanish cork tree, rugged and rough barked, propped up these days like an old man using a walking stick close to the entwined figures of a statue of The Rape of the Sabines. 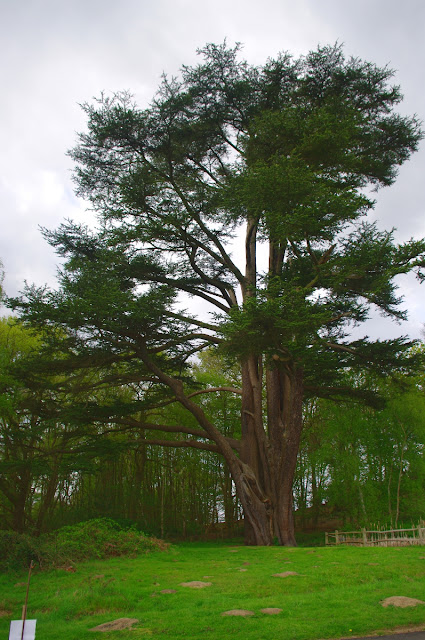 The Cedar of Lebanon

Many of todays shrubs, trees and plants are the same species and types Hamilton originally planted. The restoration not includes the views that helped create the English Landscape Movement, Hamilton's series of ,”Living Paintings,” as he liked to call the views but also the trustees are remaining loyal to Hamilton's seed catalogue and planting scheme. 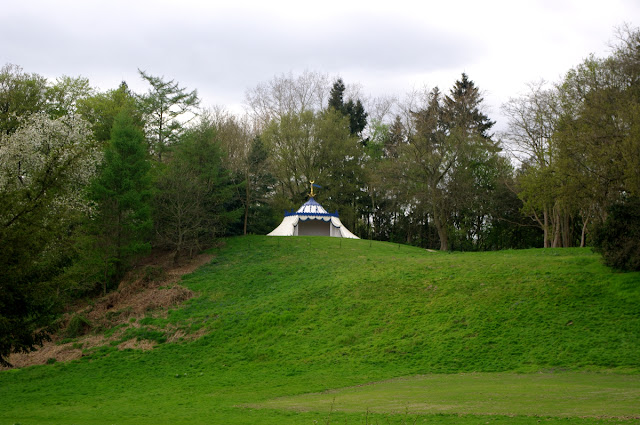