In the Saturday Guardian yesterday, (13th October), Jarvis Cocker reviewed the new tome about one of the Beatles, John Lennon. Hunter Davies, who wrote the first Beatles biography, has collated many of John Lennon’s letters for  this book. The letters are dated from 1951 to 1980.
It has been produced to commemorate fifty years since the Beatles hit the world stage.  Fifty years!!! I can’t believe it. 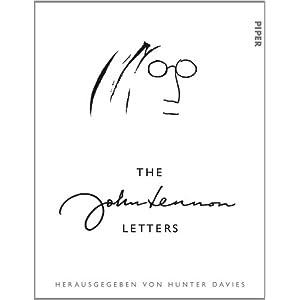 Jarvis Cocker comes up with some very creative phrases.

“We are the children of the echo. Born just after some kind of explosion, and doomed to spend the rest of our lives working backwards to try and get as close as we can to the moment of The Big Bang.”

Does he mean born after the dropping of the first atomic bomb or does he really mean the bang that began the universe?  I presume the birth of the Beatles is some sort of Big Bang in the world of creativity and music. Jarvis is a little vague on his precise meaning in this statement. However I can see his point about working backwards. We have come so far in this world with trivia, useless pursuits, greed, consumerism and ego mania we need desperately to put the genie back in the bottle and get back  to a more frugal, purposeful and purer life. Well, maybe that is what he means. The Beatles as some sort of purer reality?  Well I’m not sure. Maybe he means the purity of their music? The innocent honest lyrics and so on. Or maybe the world they came from wasn’t as tarnished as the world now? The second world war had only finished so maybe not that. Oh  well, I’m sure he knows what he means.
Jarvis is hoping to find an answer to the question,

“ Just how did those four lads come to “shake  the world”?

He  hopes the letters of John Lennon will help.
However what he finds   in this book are short notes such  as; (they are so short  I even have time to transcribe one or two here.)

Mind blowing! I am sure you agree.

According to Jarvis Cocker what Hunter Davies appears to have done is contact anybody and everybody who has ever bought a piece of John Lennon memorabilia at auction. These are not the treasured kept letters of family and friends. These are valuable scraps of writing because they have  been auctioned and are worth money. They are little investments in bits of John Lennon. Their inanity is not the point. Lennon touched these pieces of paper and scrawled things on them. A John Lennon letter, a little more substantial than his ,"post it notes."

They  are artefacts. Jarvis Cocker tells us that next to each transcription is a photograph of the original piece. The photographs of the artefacts are more important than the content transcribed next to them.  Jarvis Cocker may be exaggerating to make a point here. I am sure there must be some insightful, letters amongst the items in this book. Actually, my local Tescos has some copies for sale. I am not going to buy the book but I might spend a little while trawling through it for free as I do my weekly shop for apples and oranges, pasta, milk, butter and bread. I’m sounding like John Lennon now. He would approve no doubt. Nobody is going to tell me off!!!!!!
Towards the end of the article Jarvis makes a comment which really lit up my  thinking.

“… the  whole point of the Beatles is that they were ordinary. Four working class boys from Liverpool who not only showed that not only could they create art that stood comparison with that produced by the establishment- they could create art that pissed all over it……the  greatest creative force of  the 20th century.”

Again this is an over exaggeration. “The greatest creative force of the 20th century,” I don’t think so but a great creative force all the same. But the comment, " they were ordinary," got me thinking. Just recently myself and some friends were in Liverpool for a school reunion. We all got together at The Monro Pub in Liverpool’s docklands in the evening for a meal and few drinks. During the day, before the evening festivities began, some of us decided to take a Beatles tour. We booked the National Trusts Beatles tour which enabled us to visit John Lennon’s childhood home in Menlove Avenue ,Woolton and also Paul McCartney’s childhood home at Forthlin Road. 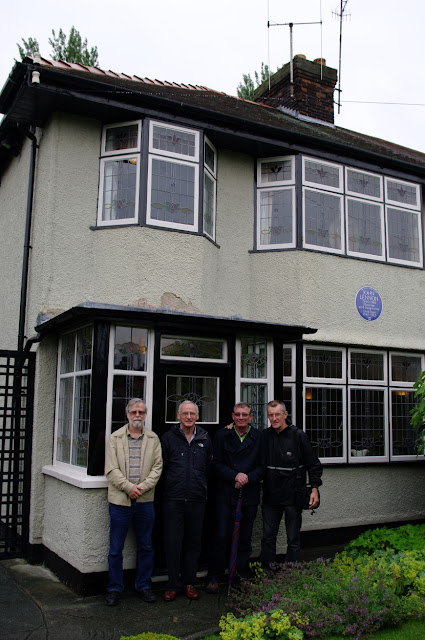 Me and some mates outside 251, Menlove Avenue, where John Lennon lived with his Aunty Mimi

I agree with Jarvis Cocker's point that the Beatles were ordinary. John Lennon’s home was a semi detached house in a middle class road. It was his Aunty Mimi’s and Uncle George’s house. They looked after him because his mother Julia wasn't cable of doing so. Anyway she had divorced his dad, Alfred, who was a merchant seaman and never at home. Julia had a new family to bring up. So John was the typical, unfortunately more so these days, damaged child from a broken disrupted home. His Aunty Mimi moved heaven and earth to try and stabilise his life for him. She had ambitions for John.  Music was a sort of rebellion for him and something he could retreat into.

Paul McCartney on the other hand lived in a typical terraced council house on a council estate. He came from a very stable background. His father was a working class docker in Liverpool docks and his mother Mary was a nurse. They were a stable family. Paul enjoyed his music and wrote songs because he loved to do so. He tried out his songs on his family. His father collected records so Paul had music to listen to as well. 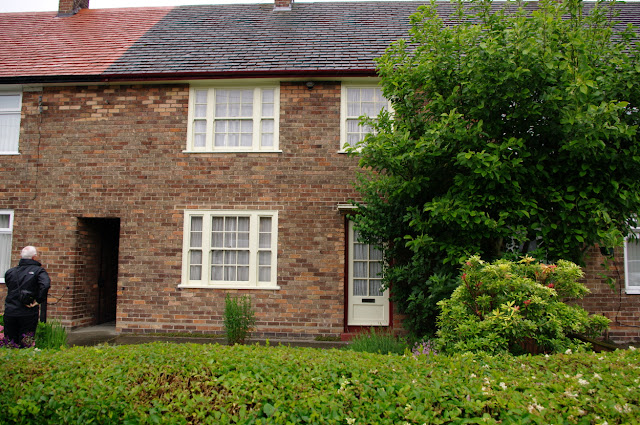 In visiting their houses it brought back a lot of memories from my childhood. My family, like Paul McCartney’s family, started in council property but in Southampton. After the war when my dad returned from Burma he got a clerical job on board the transatlantic liners, The Queen Mary and the Queen Elizabeth, as a pursers assistant. When he met my mum he decided to get a job ashore as a clerk in the accounts department of a seed company in Southampton. They had little money and so lived in council accommodation. But my dad had ambitions. He studied hard for his accountancy exams and became a qualified accountant. Eventually my mum and dad bought their own house. They had ambitions, for myself and my two brothers too. Just as John’s Aunty Mimi had ambitions for John. My parents made sure we had a good education. How many people now really and truly value and understand the importance of a good education? We attended, first of all Charlton, a junior school and then the secondary school, St Mary’s College, Bitterne Park, in Southampton  both run by the Christian Teaching Brothers, (the ,”de la Mennais Brothers,”) a religious teaching order from Brittany . The point is, from a lowly start in life my family had ambitions and we progressed.

In the 1950’s and early 1960’s council estates were full of people on the bottom rung of society and many of them worked hard and they had ambitions to progress in life. One friend of mine who lived in a council house too is now a professor at Belfast University, another is a managing director of a company, many are teachers, or became solicitors. Often people on housing estates, because they had mundane blue collar jobs, poured all their imaginations and creativity into hobbies. I’ve known judo experts, enthusiastic boxers, gymnasts, ballroom dancers, musicians who played at weddings and at local pubs, model makers, go cart enthusiasts, mechanics building their own kit cars,pigeon fanciers, whippet owners who raced their dogs and many many who  grew their  own  vegetables on council allotments and the list of activities goes on. Housing estates used to be bursting with creative people. Paul McCartney is a prime example, perhaps also George Harrison too. Ringo Starr was a local drummer who inadvertently tacked along. Nowadays I am not so sure people on council housing estates have this same drive and purpose to their lives. For a  start  much council property has been sold off. 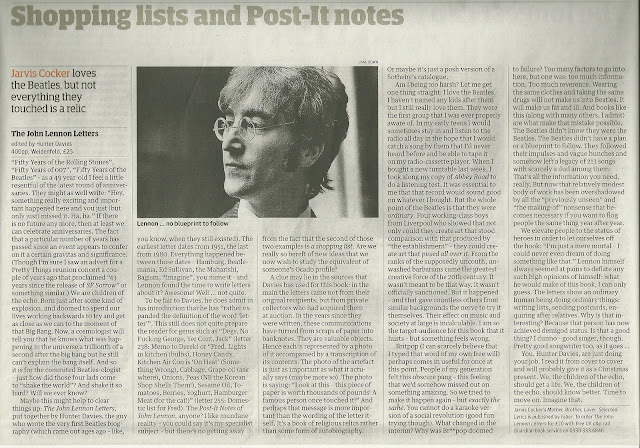