Dickens and London, an Exhibition. 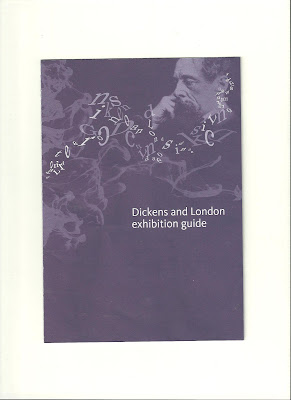 It is only appropriate that London should somewhere have an exhibition about Charles Dickens this year. It is the 200th anniversary of his birth after all. Where better than The Museum of London set above the road level in The Barbican. An area Dickens undoubtedly would have known well with Aldersgate next to it, the chapel, John Wesley preached at nearby, an area that was packed with coaching inns for the Georgian and Victorian traveller, St Paul’s Cathedral dominating the scene towards the south and close by too, the site of the great 18th century post office where letters were distributed around the whole country by a fleet of fast coaches drawn by swift teams of horses. There are few of these buildings still in existence and I think Dickens would probably have difficulty in recognising much of the area. A small street called, Little Britain, is nearby and although ,"little," by name and little in size, has rather a large part in Great Expectations as the Street where the lawyer, Jaggers office is situated. The Museum of London is in the heart of London and Dickens would have appreciated its location and significance. The museum explores, the living breathing organism, the monster that is London and from which Dickens drew characters and plot and added them to the life force of the great city. The Museum in it’s way is like Dickens in its aspirations, it has an insatiable eye on London and a thirst for knowledge of London.
The exhibition starts with a quote that shows London is Dickens's muse, it is his ,"magic lantern,"and portrays Dickens as what many see him as, London's very own, "special correspondent."

"... the great beating heart of London throbs in its Giant breast. Wealth and beggary, vice and virtue, guilt and innocence, repletion and the direst hunger, all treading on each other and crowding together, are gathered round it." Master Humphrey's Clock 1841
The exhibition is set out in a serpentine route that gently weaves its way round the exhibition like a river reminiscent of The Thames itself. It is divided into themes. “A City of the imagination,” “Amusements of the People,” “Home and Hearth,” “Dickens and the modern age,” and, “In life and death.”
The displays are wordy and explain on posters and panels in great detail every aspect of Dickens life in London. From this point of view the exhibition is an adult exhibition. This would put children off. There are plenty of photographs of Dickens, his family, friends and of London and the people of Victorian London. These I am sure are rare and precious items but some are rather small and you have to get close to have a good look, which is not always possible in a  popular exhibition like this. It is interesting to compare photographs of Dickens and some of the portraits of him. In the photographs he is grey and his face is lined, they are daguerreotypes and albumen prints. He looks human. In the paintings, especially the portrait commissioned by Forster, his best friend, he looks heroic, the great man of letters. He was 27 years old at the time of the portrair commissioned by Forster. 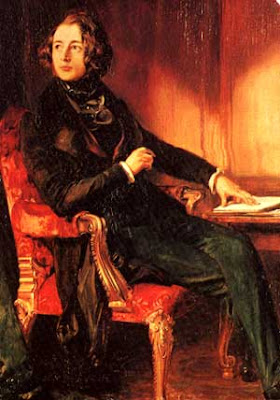 I think the exhibition is rather flat. Flat in the sense that everything is flat on walls, on information panels, paintings, photographs or in glass cases. There are not many substantial three-dimensional items. The exhibition is dotted with what the curators term, highlights. These are objects Dickens used or knew well. There are a plethora of manuscripts, Great Expectations, The Mystery of Edwin Drood, Dombey and Son, David Copperfield and there is Dicken’s annotated version of Oliver Twist with his handwritten stage directions for reading the murder scene of Nancy by Bill Sykes. 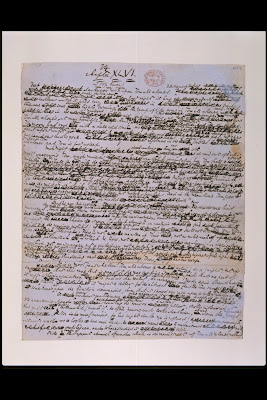 There are a few  evocative three-dimensional items such as the watchman’s box from Furnivals Inn, Holborn, where Dickens obtained rooms. Dickens must have passed that rather ordinary looking wooden construction many times and spoken to the watchman inside to say goodnight or perhaps make a comment about the weather. There is an iron door from Newgate Prison. That made me smile. The Museum of London seems to have an abundance of doors and items from Newgate Prison. There is  the entire, wooden clad interior of a prison cell from that establishment. It is carved with the names and graffiti of many bored and fearful inhabitants. The thought occurs to me that when Newgate Prison was demolished there were people then who thought,
“ I’ll keep that door, or that bit of wood panelling. They might come in useful.” 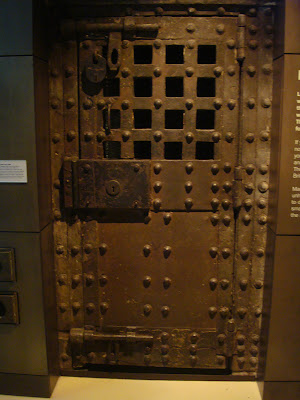 The most interesting and emotional piece I thought was Dickens writing desk and chair. I stood and stared at the desk for a while looking at every scratch and mark and wondering if Dickens made those marks or actually wore out the leather cover on the desk top himself. 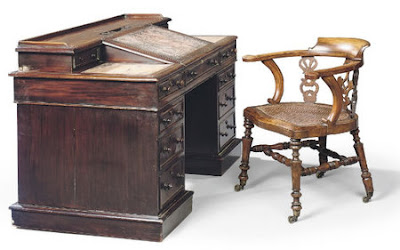 These are the very pieces of furniture that appear in the painting by Robert William Buss called Dickens Dream. It was painted after he died and portrays Dickens sitting at the desk and in the chair, in a bay window of Gads Hill Place. He appears to be sleeping in the picture, dreaming about all the characters he has created floating around the room and around his head. The actual painting is to one side of this exhibit but directly behind is an enormous version of the painting covering a whole wall, which is very subtly animated. At first you might not think it is animated but  you begin to notice that each scene is taking it’s turn to move. The illustrated characters perform the scene they are frozen in in the original painting.  It is doing for us what we do as readers. As readers we remember what has lead up to a scene and predict what might happen next. I must admit, although this is done well, I have a grouse against museums and exhibitions doing too much for us. Computers and software programmes can do for us what our minds should do. Technology is  useful in a museum context but if it takes away from or ignores the original historical object, picture or document, then it is damaging the interaction a museum really needs to create. 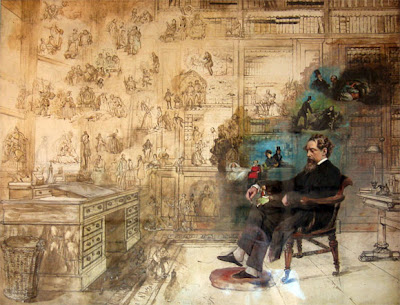 Technology is however used creatively and beneficially at one point in the exhibition. There is a screen room at the end with seats for you to sit on. A wall is used for a film presentation. A story by Dickens from Sketches by Boz is read out as a film of modern day London is shown, people walking, traffic, buildings and so on. The article by Dickens is about him walking through London. The camera takes us on a walk through London as Dickens once did. It is a film portraying in a modern way what Dickens was saying in words. I think this works because the film is a piece of art in itself. The viewer can have a creative response to the film and to the piece of writing.

At the part of the exhibition that deals with Dickens and the modern age it is important to put yourself in the shoes of Dickens or at least a Victorian of the period. Technological innovation was of course, steam ships, the railway and the Penny Post. Those were at the cutting edge of the Industrial Revolution. So old and ancient to us now,but, yes, this was new to Dickens and the people of his time and as exciting as laptops, i-phones and renewable energies are to us now. Just as we embrace our laptops and smart phones, Dickens embraced these new technologies whole heartedly. He travelled to America on a steam ship. However, after that bone shaking and uncomfortable experience he returned by sailing ship. New technology does take a while to settle in.
The exhibition has been well attended and on the day that Marilyn and I went there were plenty of people going around it. For a person who doesn’t know much about Charles Dickens, if they follow the exhibition diligently they will come out with a very good sense of who and what he was. Sometimes it is more about Victorian London than Dickens, which is not a bad thing, because that gives us a context. Dickens would have approved.
Posted by TONY at 01:52:00