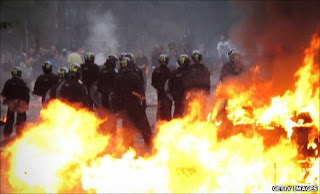 On Saturday night a young man was shot dead by police in Tottenham, North London. Whether the police felt threatened, the dead person was carrying a gun, or overreacted, we will have to wait for the investigation into his killing. This provoked a peaceful demonstration by his family members and friends who marched to the local police station to get answers to the killing. The police were slow to react and communicate with the family.
Later that night, apparently disaffected youths went on the streets burning and looting shops in the Tottenham area and this escalated in a full blown riot. At first it seemed a reaction to the killing but it has turned into mindless violence throughout London over a number of nights and other places in the country, Liverpool, Manchester and Birmingham. What is a feature of these riots is the imitation of violence that is occurring.
The family of the shot young man have appeared on televison to say that they do not condone the violence. They want answers about the killing of their son but did not expect and do not want this terrible destruction and further injuries and deaths in response.
The police have struggled to contain the violence and destruction. The groups of youths and gangs involved move quickly and swiftly from one area to the next ahead of the police. What was very worrying at first was that these gangs seemed immune to arrest. It seemd nothing could stop them. BB communication, (the use of Blackberry phones), Twitter and Facebook helped them organise quickly and warn each other of an impending police presence. The police have now joined these Twitter and Facebook groups and I am sure are hacking phones, so are able to predict areas where the violence might break out next.
Some youths have been interviewed and on some television coverage you can hear them shouting to each other. They are saying things such as,
“Nobody can stop me. I’m showing the rich and the government I can do what I want.”
“I’m going back to get more stuff.”
"I'm going to keep on taking stuff until I get arrested."
The word ,”stuff,”  means getting things from looted and smashed shops. What is it they want? Phones, trainers, designer clothes, computers, I-pads and so on. These are the desirable things of our consumer society that are held up to our youth as symbols of what they need to be part of their culture. These things define them.
It has boiled down to is greed fuelled by a consumer society.
How have we got to this amoral society we live in?
Many of these youths come from poor backgrounds however they are offered the same education system the whole country gets. They have a National Health Service which provides all their health care. It seems they have the opportunities to get on in society. If they want to make something of themselves they can but they are rejecting these things.
Many families are broken. Religion is generally rejected by the majority.  Generations of broken family life is now endemic for many in this country.
It’s not just the poor who suffer this moral collapse, many of the rich too are just as amoral.
Consumerism has fuelled this. Maybe the economic downturn in the world might create a more balanced view of consumerism and bring back higher moral values but I’m not expecting too much.
At the moment we have to contend with burning and looting in Tottenham, Croydon, Sutton and Colliers Wood, which is only two miles from where I live. I was in one of the sports shops in Colliers Wood a week ago that was looted and burned on Sunday night. That is a chilling thought.
Police cells are full throughout London. Magistrates Courts are working twenty fours a day. Although London was reasonably quiet last night, Birmingham and Liverpool were alight again. When is it going to stop?
Posted by TONY at 00:29:00