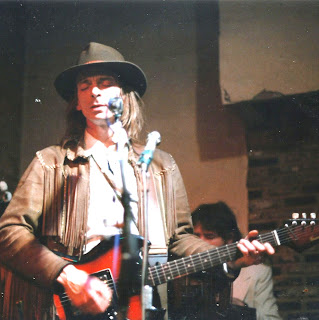 Tom Yates in concert in an Antwerp club.

Two Manchester mates, Mike Billington and John Constantine, have recently begun a venture together and started a new recording label called, EPONA RECORDS. Mike and John are well-known musicians on the  pub and club circuit of Manchester.

This is their second release on the EPONA label. It is a CD compilation of songs by another old friend, singer songwriter Tom Yates, who unfortunately died in Antwerp in 1993.  This CD, “Love is Losing Ground,”is the product of a labour of love by Tom’s widow Sonja, who agreed to release these tracks and the hard work of Mike and John.John used digital software to clean up the tapes of the songs.

The album can be best described as autobiographical; a heartfelt exposition of Toms deeply held religious beliefs and a view of the world, particularly European in essence. Although Tom was born and brought up in the tough environment of the northern mill town of Rochdale which was at the heart of The Industrial Revolution, those experiences do not seem to infiltrate the songs on this album.  However the religious beliefs expressed in the album do echo the strict Protestantism of the northern mill towns in the Victorian period that created the strong work ethic that drove the north to be the industrial might of Britain and the world. There is a similar strength of purpose reflected in these songs.

Two photographs of Tom are featured on the album cover. On the front of the CD a picture shows Tom, wearing his cowboy hat and leather tasselled jacket, electric guitar in hands as he sings into a microphone, his intimate club audience close to him. The picture on the inside of the cover shows Tom gazing wistfully into the distance with the ancient city of Athens, bleached and bright in the background. Ancient Athens was the centre of the ancients study of  gods and religion, the birthplace of philosophy.This is a reference to Tom’s religious journey exploring what god is and philosophising about the world and the human condition.  Both pictures encapsulate the essence of this collection of songs.

The opening song, “Love is losing ground,” is also the title of this album.  The lyrics set out Tom’s strong beliefs and views using powerful religious imagery delivered with a haunting clear voice. Refrains about ,”love forging the  new man,”  sets a positive note but the synical refrains  the ”word gives way to image,” and , “ love  is losing ground,” reveals a negative and perhaps depressed view of the world. There seems to be a certain pessimism here. This is a studio  album and the   reverb produced on most  tracks combined with Tom’s crystal clear vocals and reedy voice create a wistful  atmosphere combined with his spare and economical  guitar playing. The tempo is slow which adds to the haunting quality. Listening to this track gave me the feeling that Tom was close by. The intimate club atmosphere is recreated well in the studio.

The second track, Jaques Brel, immediately takes us to Tom’s adopted country, Belgium, and the city Antwerp.  Jacques Brel was a world famous Belgium singer songwriter, actor and film star renowned for his guttural singing and sparse uncompromising songs. He played to club audiences the world over. Tom tries to imitate Jaques guttural rolling of his ,r’s, with a more staccato delivery and a driving earnest tone to his voice. I don’t think he achieves it in this song. Tom’s voice is more suited to his own haunting wistful lyrics. But obviously Jaques Brel was an icon that Tom admired and  he wanted to pay tribute to his Belgium compatriot. The song brings some invention and experimentation with the introduction of trumpets to compliment Tom’s acoustic guitar playing.

Godspeed, returns us to Tom’s religious theme with a more hopeful and encouraging tone to it this time. The reverb is still very evident, still creating a wistful feel. It is a speedier number and also introduces backing singers who seem distant so as not to impinge on Tom’s voice too much. Tom has not got a powerful voice, his vocal strength lies in his perfect pitch and clear intonations. There are a lot of New Testament references. He sings about,  “showing me the wounds bleeding all the same.” He is doubting Thomas. The metaphor," ripples on the lake,"  suggest Galilee and the symbolism of water  in  Christianity sending out a message that extends like the ripples.

Tango Valentino is a big departure for Tom. He seems to include a number of genres in the one song. There is a short rock refrain which returns now and then, combined with a tango riff suggesting the title and perhaps a reference to Rudoplph Valentino, the 1920’s Italian, Hollywood heartthrob, and a hint of Jaques Brel.  The whole piece opens with a meatier base sound. There is still the use of reverb throughout which seems to be Tom’s signature. The lyrics are more depressive in this number talking about the,”world of sorrows we live in.” He berates the world, disenchanted with money, the use of credit cards and financial backers. A little note of anger about decadence which refers to movements such  as Dada in the Weimar Republic of the 1920’s that introduced anarchic ideas as a reaction to the first world  war. He thinks avante garde  movements , “try too  hard.” These references to the Europe of the 1920’s in this piece show Tom view that it was a particularly decadent and immoral period in Europe’s history which his religious beliefs encourage him to counter.This number ends with an oboe refrain, haunting in the memory.

Brutal and Cruel, brings a change of tempo. It is a faster high tempo number with a happy jolly bounce and feel to it which contrasts strongly with the theme and contents of the lyrics,”the good life we are living can be brutal and cruel. Too many  deaths.”This contrast creates a sarcastic feel which shows Tom feeling hopeless about the state of the world. He reverts to humour to deal with what  he sees as  evil. It  reminded me of the film, “Oh  What a Lovely  War,” which used music hall entertainment to  portray the horrors of trench  warfare  on Flanders  Fields, which of course again brings us back to the Belgium  link. There is also a brass intro to this number which is a departure from Tom’s usual  slow, intimate guitar  licks.

Amid The Alien Corn, sees Tom being pessimistic and a little homesick and feeling the dislocation from his roots. His , “homeland is torn from him, in these alien fields of corn.” It could almost be a reference to Joseph, in the Old Testament and his near death experience, his exile and his rise to power dealing with the harvests in Egypt. An association of strife and overcoming adversity  becomes apparent in this album and was part of who Tom was.

Wild Track, is a moment of self-recrimination laying bare his own failings. ,”Blame it on the money and the weed.” “Pound of flesh on the bathroom floor. Blood in the bowl.” Stark stuff, reminiscent of John Lennon’s Cold Turkey and Whatever Gets You Through the Night.

In Misha Madou, a song about remembrance of a past lover, there is more musical experimentation using synthesisers extensively combined with Tom’s acoustic playing. A pleasant combination of sounds. The electronic synthesiser gives a feeling of cathedral space. I think there is probably too much feedback on Tom’s voice in this number but a brave attempt that doesn’t totally work.

Stars and Sails  has Tom producing some classical guitar references played crisply and sharply. He is pondering the universe, whistling as he contemplates the stars and planets, their function and their meaning. The guitar playing is enjoyable to just sit and listen to on this one.

The final tracks bring us back to overtly religious themes. A table in the wilderness seems to combine the Last Supper Table with Jesus’s sojourn in The Wilderness for forty days and forty nights. It is an upbeat number with some harmonica to go with his guitar playing, giving a wilderness campfire feel to it. You can imagine Jesus with his disciples sitting round such a campfire eating fish from Lake Galilee caught by Peter and the conversations that ensued. And in, “A Song of sable Night,” Tom has become one of the disciples sitting at the feat of Jesus who appears to focus on Tom. A meditative reflective song There is a slightly discordant note when the message Jesus gives, “sets you free,” but, “is grief to some.”  Tom is at his most serious and introspective. Finally the CD ends with, “It’s been a while,” This is an autobiographical number, Tom in his faded blue dungarees recalling the past and finding it difficult to separate dreams and memory. Ancient civilisations and tropic isles are recalled.  Whether this is a hint at a belief in reincarnation is not evident.

This album provides food for thought. You do not have to agree with Tom’s religious beliefs but you can admire his clear honest look at life and the world around him. It is a courageous album in many ways because he tries different musical styles and techniques. Sometimes they work and sometimes they don’t. He however uses the themes and topics that  influence him in creative, thoughtful and intelligent ways.