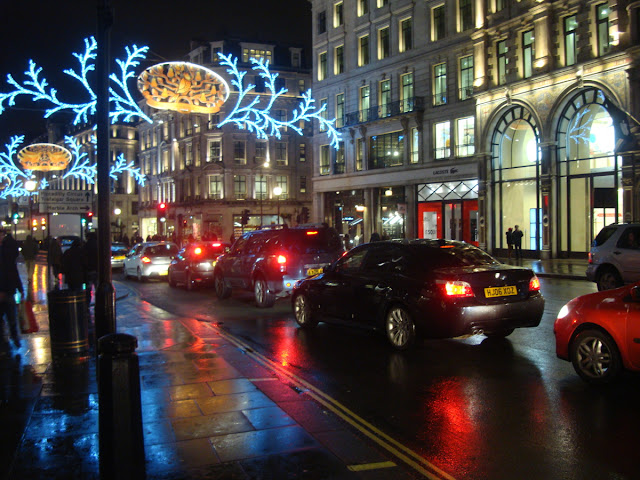 "On the first day of Christmas." (Regent  Street)

OOOH!!!! “Love it or hate it.”
Here in the British Isles we eat Marmite on toast, mostly. It’s great in a cheese sandwich too, to compliment the taste of the cheese and add that extra bight, a certain oomph! to the sandwich eating experience.

There is many a  kitchen here in Britain,  in the early  morning, a young married couple with  their  toddler sitting in his or her high  chair holding toasted fingers of bread dipped in runny boiled egg in one hand, a Marmite coated finger of toast  held in their other  hand  the youngsters face  smothered, black with Marmite and a happy  grin, chuckling and chortling as  they  suck  and chew. Oh gummy happiness!

We teach our youngsters to eat Marmite as soon as they are weaned off the breast or maybe even before.However, amongst the uninitiated, a first experience of Marmite might be  rather  disgusting. Note the Marmite slogan,” Love it or hate it!!!!!. “  It is an acquired taste; hence the very early beginning we advocate for the introduction of Marmite to our youngsters. 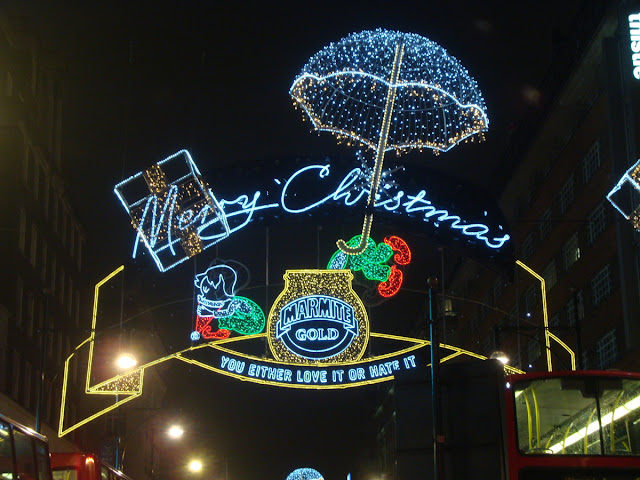 "You either love it or hate it."

But why? you might be asking. It’s very very good for you. It contains largely yeast derived from the brewing industry. It  includes quite a bit of salt within a jar, but spread thinly on toast this is not a problem. It includes many vitamins; thiamine, riboflavin, niacin, folic acid and vitamin B12.
Between 1934 and 1935 it was used to treat malnutrition in Sri Lanka when they had a malaria epidemic there.It was included in the rations of soldiers in the trenches during the first world war. Incidentally a lot of the troops also  carried copies of Pride and Prejudice too,  so Marmite and Jane  Austen actually  have something in common.
Marmite was discovered in the late 19th century by a German Scientist called Justus von Liebig.  He discovered that the extract from the brewing process could be collected and put into jars. It appeared to be a healthy food for invalids.
In 1902 the Marmite Food Extract Company was founded in Burton upon Trent in The Midlands. At first  they used earthenware jars as  containers.  The jar looked similar in shape to  the French earthenware cooking pot called a ,”marmite,” so they called the black spread, "Marmite."I knew a  French Canadian who told me that when he first came to Britain and he saw Marmite on the breakfast table he thought somebody had taken the scorched and burnt charcoal off the bottom of a "marmite," cooking pot and put it into a jar and was revolted by the idea.  By 1907 it was so popular they opened a second factory in Camberwell, London. The Marmite company is now owned by Unilever and the product is as popular as ever with some amazing advertising campaigns full of British humour  that rivals the Cadbury Chocolate  adverts in their Monty Python  style craziness and bonhomie. 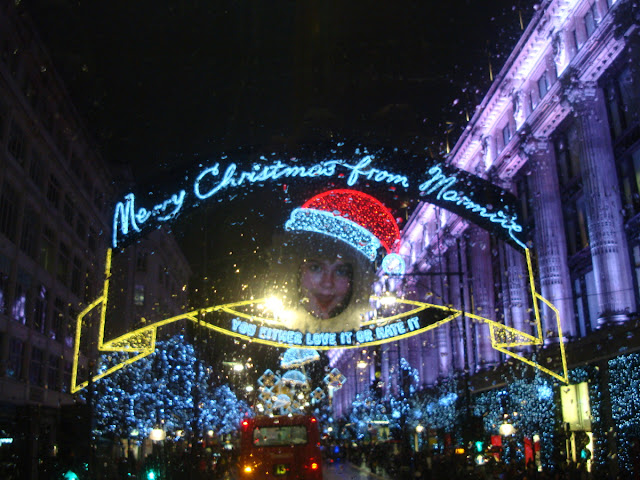 You can have your face in the display.

In the 1920’s the Marmite company started using glass jars which still retained the distinctive  ,”marmite,” shape. It is still sold in the same distinctive glass bottles today with the same yellow label, although, in March 2006 squeezy bottles, again with the distinctive round shape, were also introduced.

It is not a good idea to keep Marmite in the fridge by the way. It goes hard and is unspreadable. However it never ever goes off. You can keep a jar for years and it will still retain it’s health providing qualities. 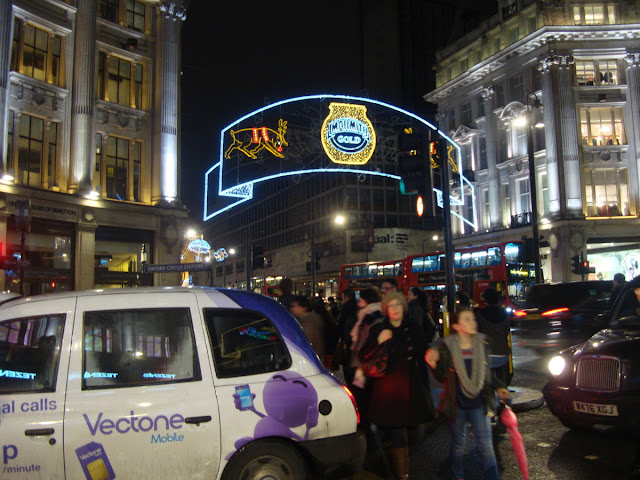 Other companies and other nations have tried to copy Marmite. The Australians have a product called Vegemite. The Swiss and Germans have versions too  called respectively,”Cenovis ,”and “Vitamin R,” but Marmite, the British product, is dominant and nobody else can quite get the same distinctive flavour that can blow your head off!!!!! 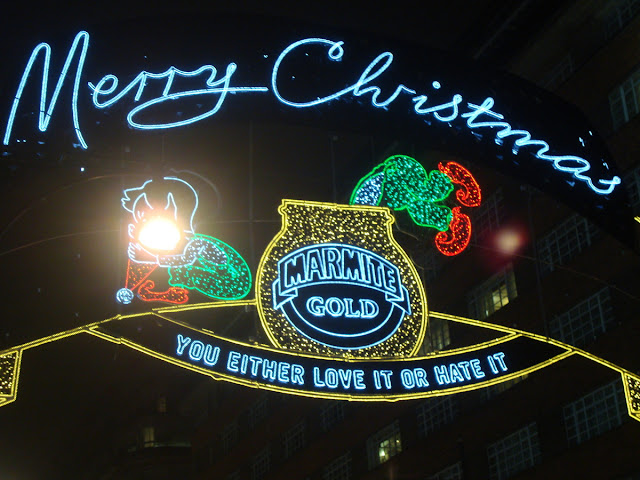 A little boy disappears into the Marmite jar.

You might be wondering about the title of this piece,,” MARMITE!!!!! AT  CHRISTMAS.” Every year Oxford Street, the heart and pulse of British shopping puts up inventive and outstanding Christmas lights displays. This year the lights have been sponsored by guess who? Yes, Marmite!!!!!
Last night, Marilyn, Abigail and myself took the 139 double decker bus from Waterloo Station across Waterloo Bridge, through Piccadilly Circus and along Regent  Street, which also has an amazing Christmas light display based on, The Twelve Days of Christmas, and then we turned left at the top of  Regent  Street at Oxford Circus, into Oxford Street and the world of Marmite hit us. All the lights are animated. Father Christmas eats a Marmite sandwich and throws it away in disgust, his face turning green. The next one shows a little boy disappearing into a Marmite jar and  lapping it all up. The next display features the happy Marmity faces of pedestrians in Oxford Street. You can take a photograph of yourself on your i-phone and send it to,the lights, and appear for a few moments in the display yourself. Delicious!!!!!! And so on down Oxford Street. 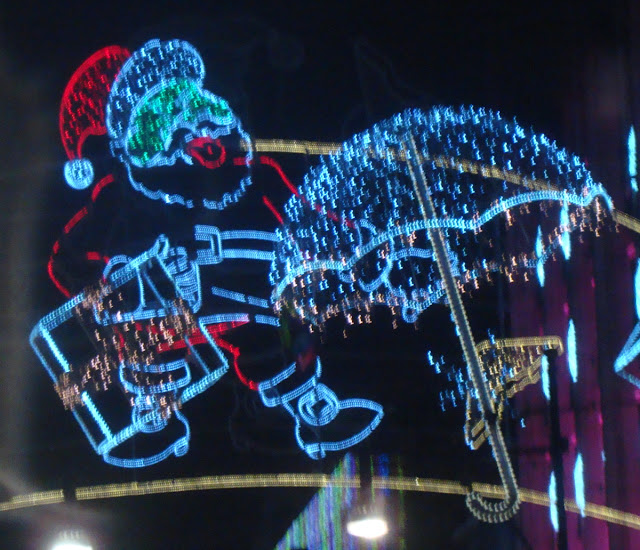 Father Christmas throws his Marmite sandwich away and turns green,

They say you stay a," Marmite baby," for life, once you have become addicted and it is an addiction. Here are two very happy ,"Marmite babies," still going strong  Ha! Ha! 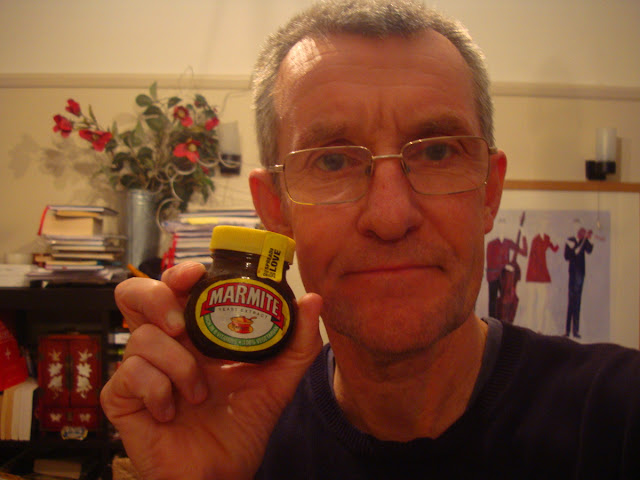