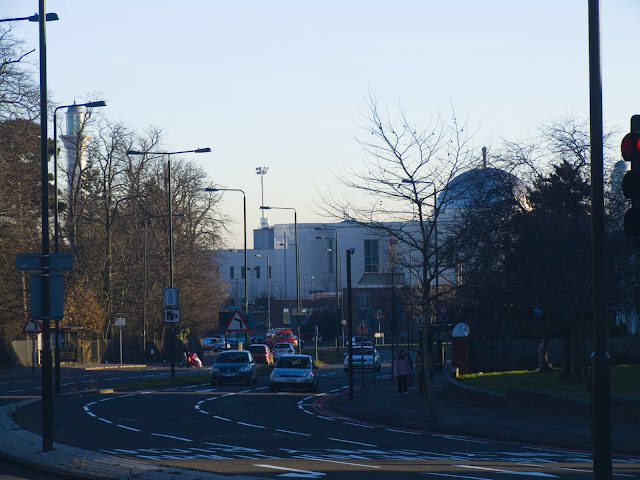 When my youngest daughter , Abigail, started in  year 1 at The Sacred Heart Junior School, Burlington  Road, at the age  of five,  she had only been there a few days when she came home one evening. As I  was about to  take  her schoolbag from her  she retorted,  “ haji ma.”  I replied, “What did you say?” “Haji  ma,”  she repeated. “Konnichiwa,” she continued. My daughter was not only talking Japanese she was also talking Korean. She was able to translate for me. I had gone to take her bag but she didn’t want me to take it off her.  “Haji ma,” means,” don’t do it.” “Konnichiwa,” means, “good afternoon.” Abigail was demonstrating the ease with which she was able to, at the age of 5, fit smoothly into the multicultural environment of  her school. On the playground they were all  conversing in a variety of languages and each of them was learning from each other.

London is the most cosmopolitan city in the world. People from all over the world have come to live here over the decades and centuries.Some to esacpe persecution;some to have a better  life for themselves and their families. Each part of London has it’s mix but often each area has it’s most dominant immigrant group. Where I live it has a very large Korean community, hence my daughter coming home speaking Korean phrases from a very early age. Restaurants, supermarkets , hairdressers, travel agents, craft shops and clothing shops are all Korean. Streets of them.

Five hundred yards from my house, near Motspur Park railway station , there is a Greek Kebab house, a fish and chip shop owned and run by a Chinese family and further along the road, a Chinese takeaway with a giant steel wok prominently on view in the shop window. Motspur  Park Tandoori restaurant holds Elvis nights once a week with a Pakistani Elvis wearing all the gear, dressed as the star; Las Vegas era. We have a hal hal butchers shop which prominently exhibits a large photograph of a cuddly little lamb which all the local children love to look at, announcing, emblazoned across it, “Fresh lamb butchered for your Sunday Roast. Delicious.”Next door to the butchers shop is EKLEE, a delicatessen and a fruit and vegetable shop with much of it’s produce exhibited on tressle tables on the pavement.It sells  the most amazing range of olives and sells the most  delicious baklava, and sweet syrupy pastry's and spicy curries made in their kitchen at the back. The range of produce it provides is a greater range of herbs, spices and vegetables than your usual English greengrocers.It  is  owned and run by Mr Malik and his  lovely Iranian family who have lived in the area for  generations. Kami’s, the hairdressers are owned by a Turkish family. The local chemist shop is run by a Pakistani chemist and my dentist is Indian.
Two miles from where I live , in Tooting, the whole area is mostly Indian and Pakistanis. Sari shops displaying the most beautifully designed fabrics of all colours often emblazoned with  gold edging, proliferate.
We get many  people from the Southern Hemisphere,  Australians,  South Africans and New Zealanders. I taught for many  years with Katie  from  South  Africa  and  Evette from Zimbabwe or  Zim as  she  used to call it.  I met Evette in my local  TESCOS the other day with  her new baby  boy.We talked and  she  is very worried about her country. Her  Mum and  Dad still live  there  and are struggling along. They are too old  now to  move anywhere else.Next to  Raynes Park Station is a small South African grocers shop. You can  get your bill-tong there and other South  African delights.

In Motspur Park,my local park,  the Sir Joseph Hood Playing Fields, is used for Australian Rules Football after the usual football  season is over.The Wimbledon Hawks use it as their home ground.. They set up  a bar selling cans of Fosters beer and hold an enormous barbecue that sends it's delicious odours wafting  across the fields  during every home game. Their  bright orange kit make them stand out at  some distance. 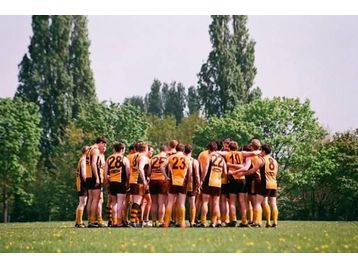 The Wimbledon Hawks at The Sir Joseph Hood Playing Fields.


These diverse communities also have their places of worship.. We have the largest mosque in Europe, the Baitul Futih Mosque, with space for 1600 worshippers at a time.
In Wimbledon Village is the Buddhapadipa Temple, with gold and jewelled designs all over it. It has a small monastery of Budhist monks and nuns and also runs a Budhist school.The Koreans have taken over an old office block which they have turned into their own Baptist  church. SomeKoreans are Roman Catholics and attend the Sacred Heart Roman Catholic Church in Wimbledon .There  is a  Christian  Science Church in Worple Road ;  Raynes Park Methodist Church, Holy Cross Church of England  and  St John the Baptist Roman  Catholic church are all within a mile radius of where I live.  Often they each hold cultural activities to which they invite all the community.  We get flyers through our front door inviting us to Buddhist and various Christian celebrations. 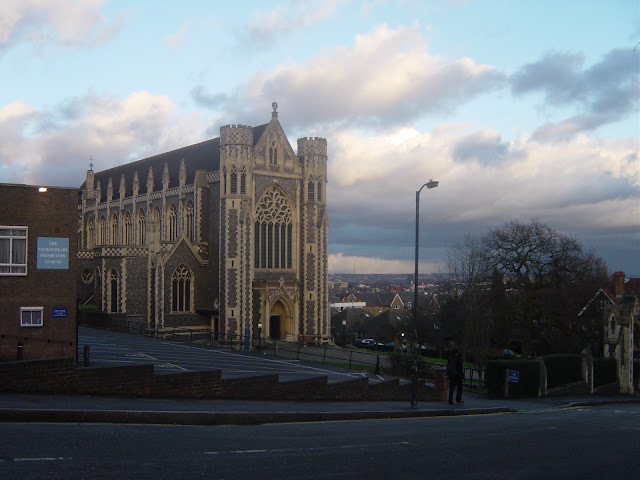 What I think is unique is that often these diverse churches and religious traditions organise things together.  Every year, for one week, there is the Raynes Park festival that includes drama and music events . They collect the money for charity. My church, The Sacred Heart at Wimbledon, has a semi-professional choir. They have purchased a Steinway Piano and also have   a giant organ with an amazing pipe system. They hold classical concerts and attract top classical musicians to perform. The Methodist Church in Worple Road has a vibrant and strong amateur dramatic society and there are various art and performance groups in the other churches too. They all come together for one week each year to put on an amazing festival. The money goes to a designated charity. The churches and different religious groups also combine to organise and run soup runs and provide accommodation for London’s down and outs throughout the year. The priests, rabbis, monks, pastors and leaders from each denomination meet regularly to discuss how they can work together and emphasise the similarities and positives between them.

The different religious groups also provide educational opportunities for the community. It is law in this country to teach religion in schools but it must be multicultural as well as specific. My children go to the catholic schools in Wimbledon. They have all been to the Sacred Heart Junior School and then Alice, Emily and Abigail have gone on to the Ursuline Convent and Sam, my son, went on to  Wimbledon College, run by the Jesuits. They are catholic schools and the catholic ethos is extremely important to them . However they must learn about all other religions, Judaism, Islam, Hinduism and Buddhism. All the churches, synagogues, mosques and temples of various religions provide education programmes. We take our children to visit the local mosques, temples, synagogues and churches to learn about their history and beliefs. All children love learning about other religions. It really does help them understand and appreciate each other.

Occasionally, in a Christian school we might get children of other faiths. There is a trust between the diverse ethnic groups. I have taught  religion lessons in the past. When I  am  teaching about Islam for instance I will always find out if there is any child who prays to Mecca and holds Mohammed as his prophet, in the class. I will  then  get them to tell us about their lives and experiences. The rest of the class really appreciate this and ask their class mate all sorts of questions. This situation does two things. First it makes the child realise that everybody in the class respects him or her and their religion. When there is a particular festival, for instance divali, we will  get the Hindu mothers in to cook us food and bring in saris and costumes for the children to dress up in.Secondly, we all learn about each other.

In one of my classes, a few years ago I had a little Jewish girl. She got very excited about the  fact  we were going to look at Judaism and told her rabbi all about it. I got a message for the rabbi saying, if I wanted, he would come in to help me teach the lesson. So I got him to come in and we team taught. He filled in all the bits I wasn't sure about. He brought in a small piece of the Tora to show the class, some unleavened bread for them to taste and some artefacts from his synagogue for them to handle, draw and write about. I took photographs of the lesson  and wrote a report which the rabbi published on his synagogues website. I got a lot of great comments on the website.. The little girl  was ,"over the moon."

It would be interesting to see how the controversial Florida pastor ,Terry Jones , who  burned the Koran on the anniversary of 9/11, would survive and get on in Motspur Park in South London where I live. It might help educate him and  others of his ilk.

My London is a melting pot.  It is not about erasing cultural differences or trying to convert people from diverse religions. It is about celebrating each other’s differences and similarities. It is about learning from each other and creating a synergy of ideas and cultural influences.

And to conclude lets all  give it for the 50th anniversary of  Jamaican Independence.