The Cobb and The Undercliff at Lyme Regis 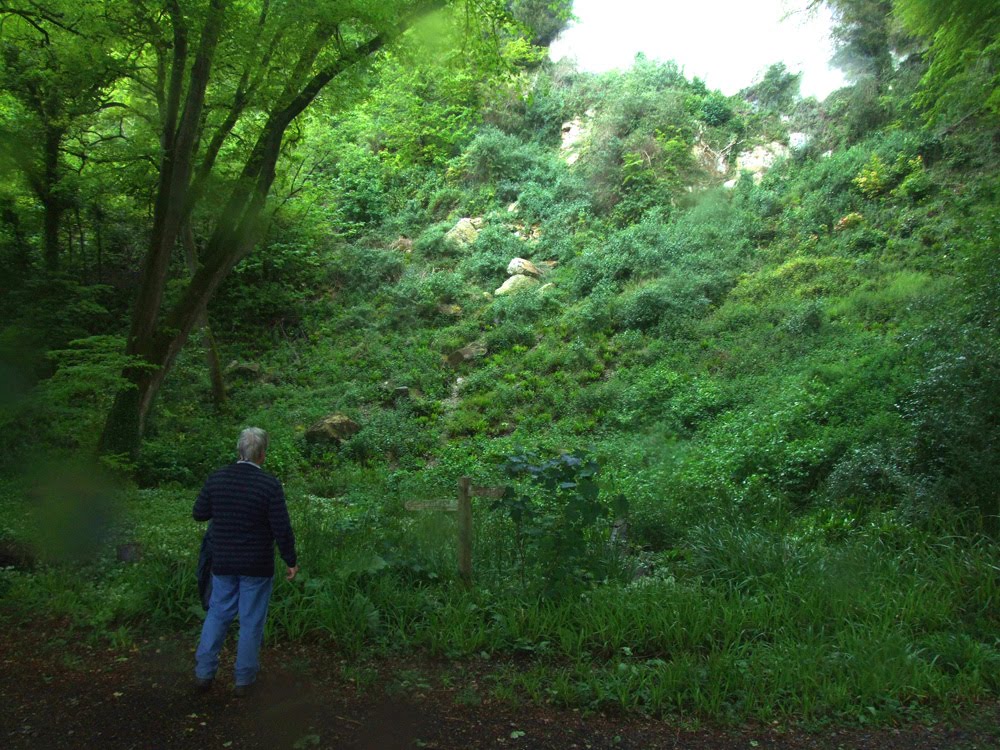 Walking in The Undercliff. A sheer cliff face in front of us. 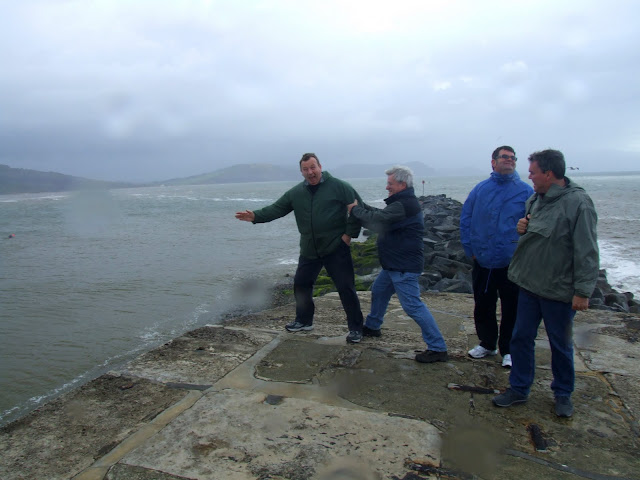 The wind nearly blew us off the Cobb. 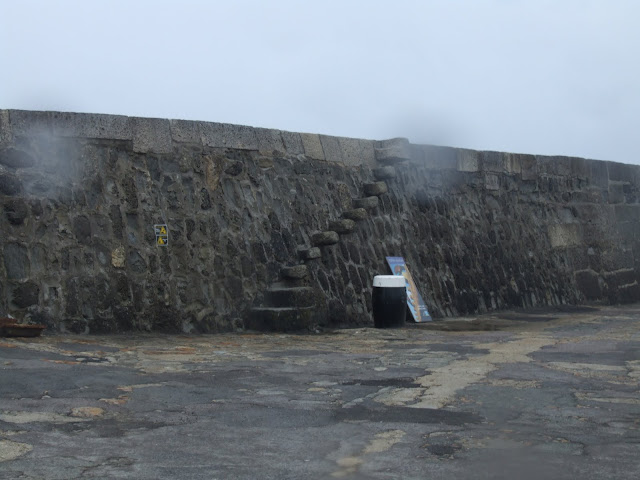 "Granny's Teeth," also known as the steps Louisa Musgrove jumped down from. 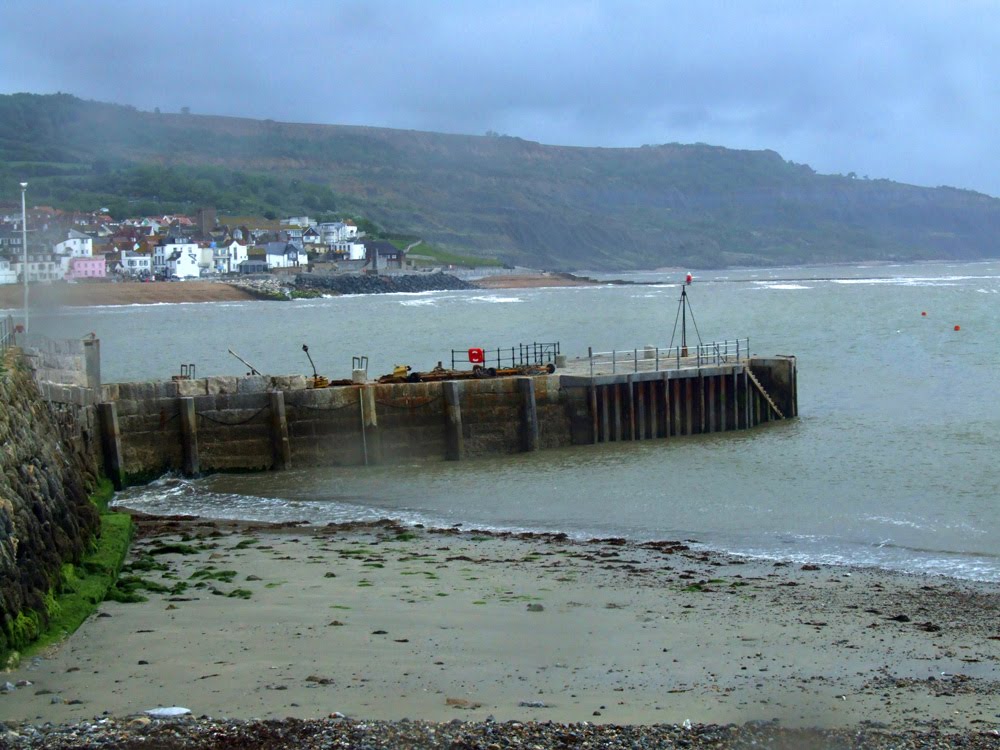 A view of Lyme looking back from The Cobb. 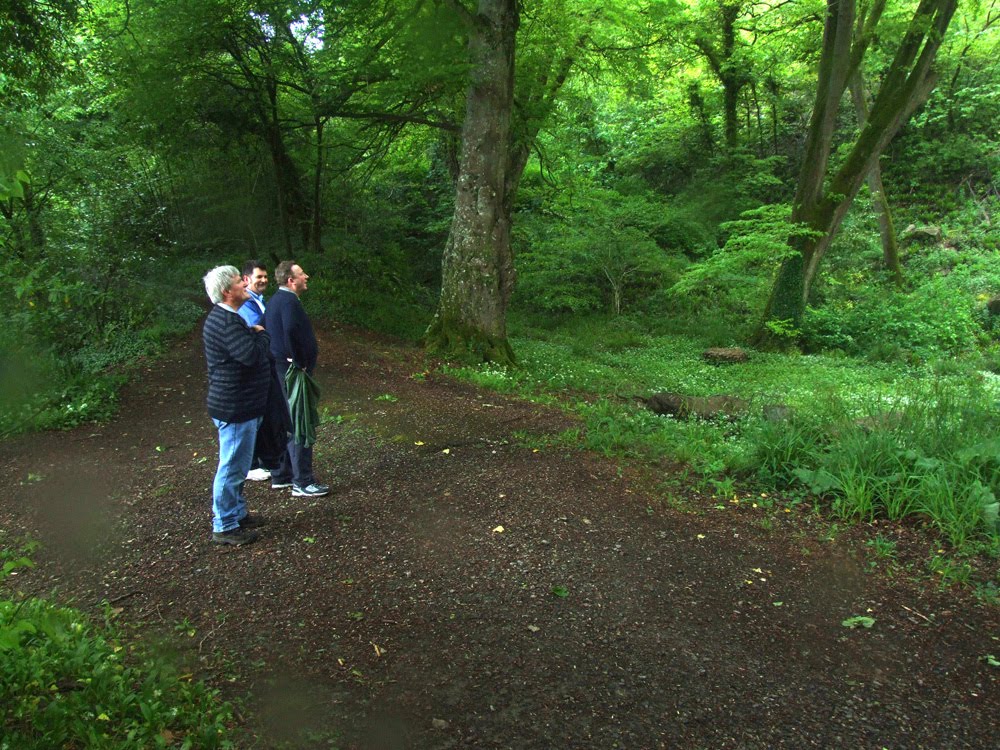 Half way there. We walked for eight miles from Lyme along The Undercliff to Seaton, which is a small village across the border from Dorset in Devon. 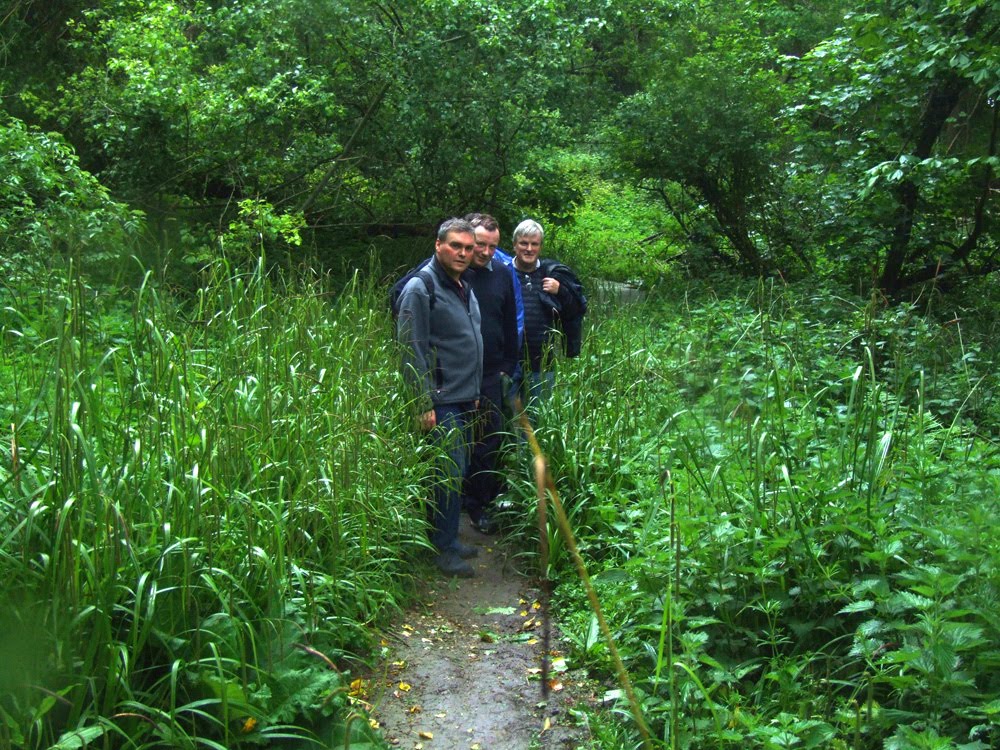 Forcing our way through the undergrowth. 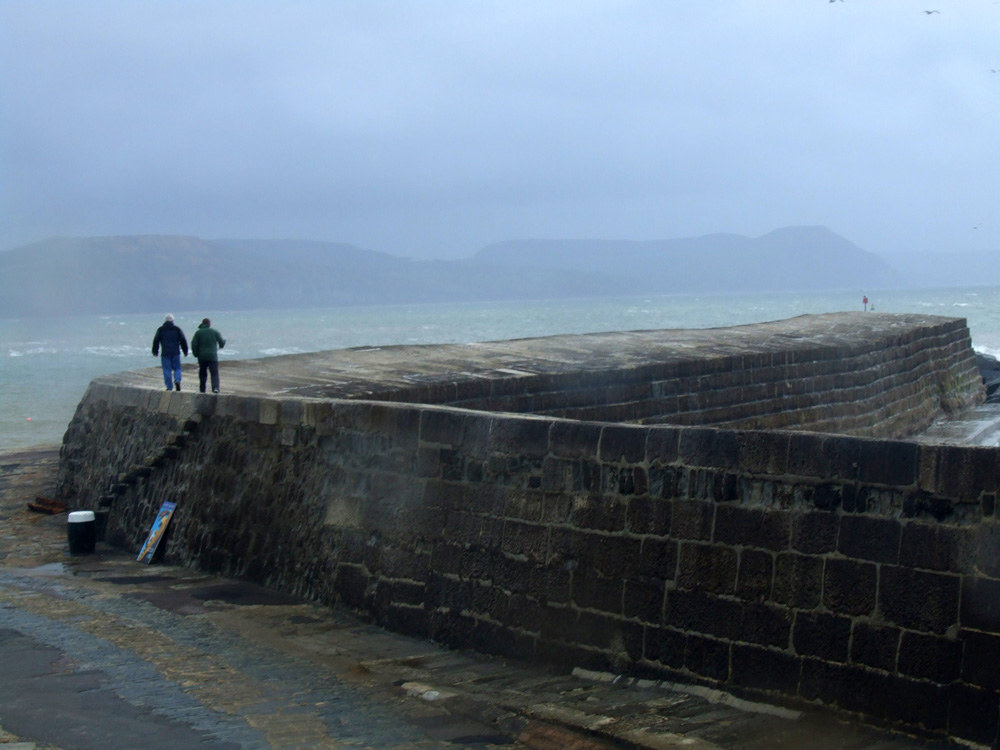 The Cobb looks like a black twisting beast in stormy weather. It feels and looks savage. 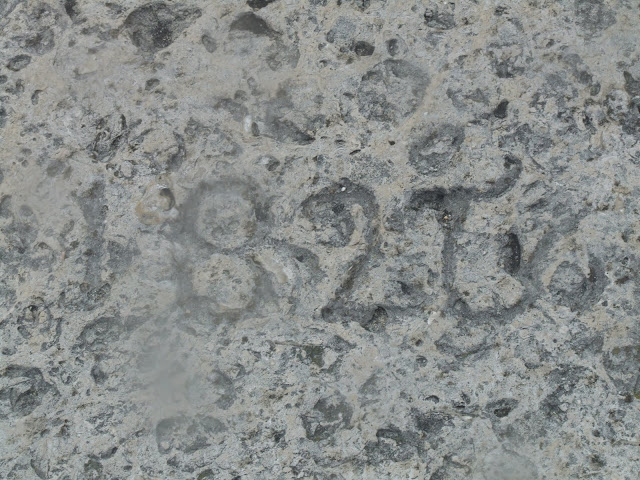 I think this says 1826. Your eye sight might be better than mine.It was carved here by the engineers who repaired the Cobb years after Jane died. 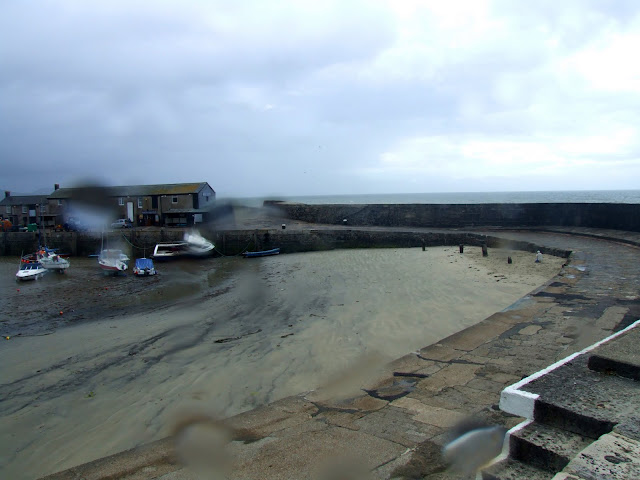 A view of the upper and the lower Cobb.The Cobb itself twists to the right after passing these fishermens huts. You can see the top of one of the other sets of steps in the bottom right of this picture. 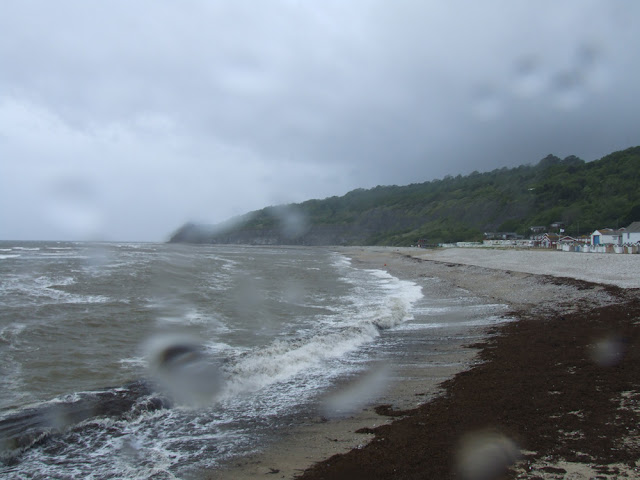 A view of The Undercliff from the Cobb. It is recorded, not in Jane's own letters but in letters written by either one of her brothers or one of her nieces, that Jane walked in the Undercliff. 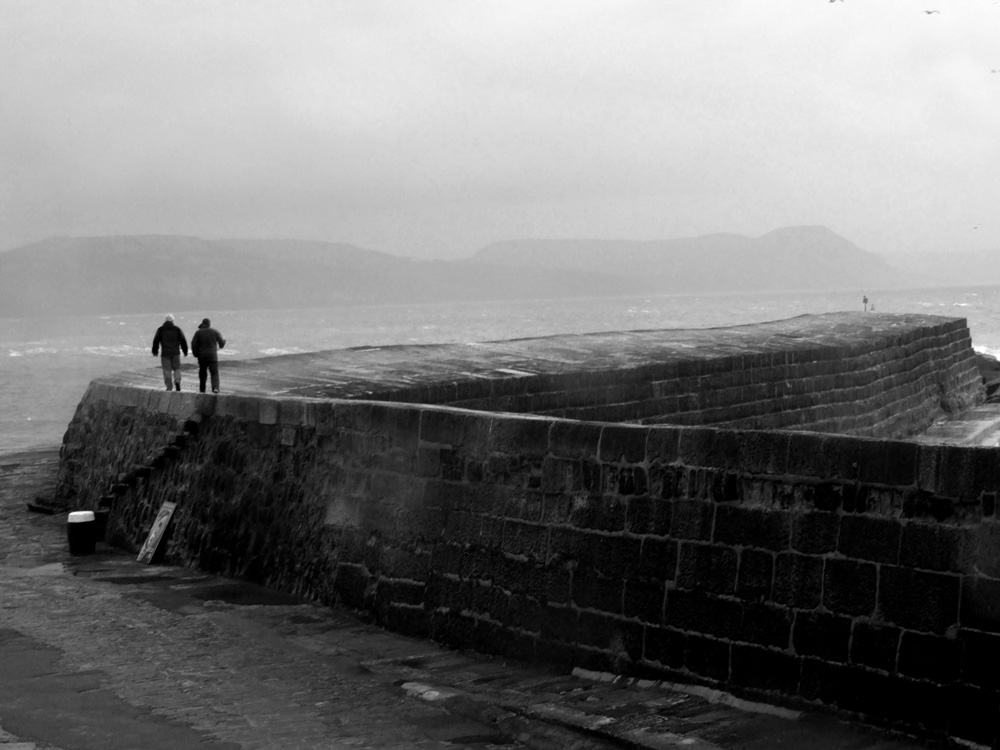 Two friends of mine riding the back of, "the beast." 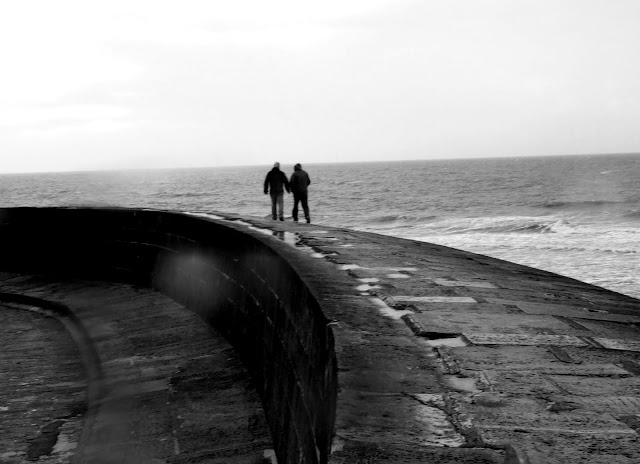 The top part of the Cobb slopes outwards towards the sea. It's not always easy to keep your footing. 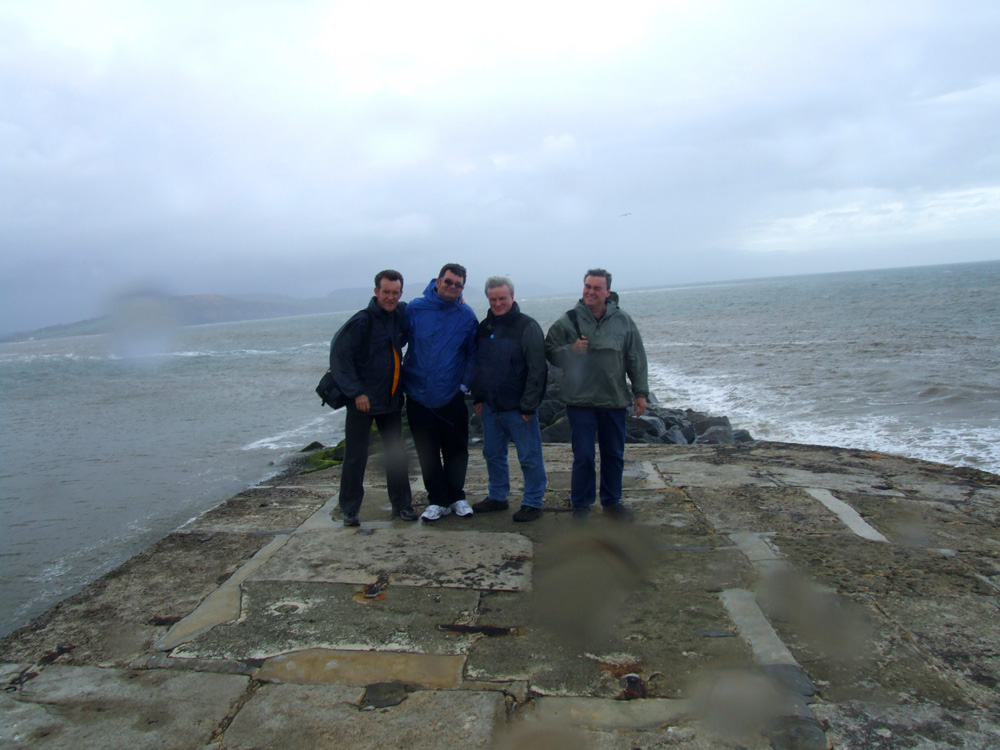 We got to the end.

It depends on the weather conditions. The Cobb at Lyme can look and behave like an evil spirited leviathan;a Moby Dick. It's a savage beast. At other times it can be a gentle, peaceful and calm creature.


Jane Austen used the Cobb at Lyme for the setting of an integral scene in her novel, Persuasion.The accident on The Cobb, to Louisa Musgrove,in Persuasion, brings Anne Elliot to the fore. She  looked to by Captain Wentworth and the others to take charge.

John Fowles, who lived in Lyme for most of his life, used Lyme , The Cobb and The Undercliff as  the settings for his novel ,The French Lieutenants Woman.These topographical elements of Lyme are like a group of brooding characters within Fowles' novel and shape the action as much as the human characters.The undercliff is  where Sarah Woodruff , the heroine of The French Lieutenants Woman, walked on her own, creating gossip and tittle tattle amongst the stiff spinsters who kept their disapproving, hawk like eyes on her every movement. It is a special place.

Lyme is the place that Mary Anning, in the early 1800's,  discovered the first Ichthyosaur. The cliffs at Lyme reveal  fossils from the Jurassic period, 190 million years ago. Many of her finds are now in The Natural History Museum in Kensington. Lyme has become a fossil hunters paradise.


A few years ago some of my friends wanted a weekend away so we decided on Lyme. Our wives went off to New York for the shopping. We tend to go to places more for the local beer and beautiful scenery rather than the literary connections. We enjoyed some of the excellent eating establishments in Lyme looking out over the harbour and the cobb and also some of the pubs in the narrow lanes and back streets of the town. We walked for miles along the undercliff from Lyme to Seaton. Much of the walk was under a dense rich canopy of tall growing, ash and lime. It is about an eight mile walk and the walking is quite tiring. At times we had to wend our way through long grasses and along twisting narrow paths.We couldn't always see far ahead. I think this always makes a walk harder. If you can see into the distance that gives you a target. We had to keep going at a steady pace. It wasn't an easy walk.

As it's name suggests, The Undercliff, is situated on the side and underneath the top of the cliffs that stretch along the Dorset Coast.It is a world heritage site and recognised by UNESCO. There have been many landslides along the coast here. It has been active for 20,000 years. More recent landslips have been recorded in 1775, 1828, 1839 and in 1840. The so called, "Great Slip," occurred in 1839 and was recorded in great detail. These slips happen because of the geological strata of the rocks that form the coast at Lyme. Chalk and sandstone, which are pervious and allow rainwater to percolate through them, sit on top of clays and limestone which are not pervious. The water percolating through the above rocks acts as a lubricant when it reaches the impervious clays and this can cause the top layers to slip over the bottom layers.These slips have created platforms and shelving along the face of the cliff.

The Undercliff is south facing. It has sea breezes but it also has the protection of the cliffs above.This creates a unique environment. It is sheltered and it gets most of the days light. It is a micro climate different from the sea before it and different from the land above and behind it. It is  verdant, almost like a small rainforest.