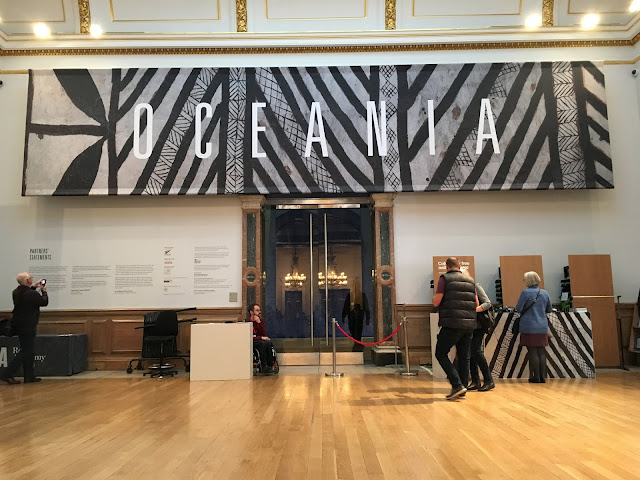 The entrance to the OCEANIA exhibition at the Royal Academy.
Monday the 1st October. Marilyn and I bought tickets to see the OCEANIA exhibition to commemorate the exploration of the South Seas by Captain James Cook in the ship, Endeavour, two hundred and fifty years ago. The exhibition is about the cultures and artefacts of the people of the Pacific Island groups.
James Cook arrived at Matavai Bay, on Tahiti, on the 13th April 1769. He discovered a new world.Walking around this exhibition the evidence shows that these pacific Island people had formed a rich and complex way of life and sets of beliefs completely unconnected to European belief systems. We are all human beings and share a common humanity. What do human beings do to engage with the world and make sense of life? 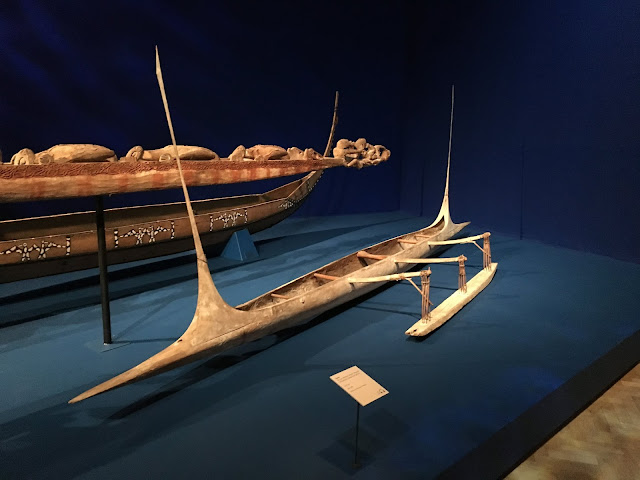 A beautiful insect like fishing canoe.
In the 18th century Daniel Defoe wrote Robinson Crusoe. With a lack of direct experience on the part of Defoe and relying on Christian and Europe colonial beliefs and systems he created a character who is the embodiment of colonial dominance. The 1950s novel,” Lord of The Flies,” by William Golding doesn’t do much better with his bunch of schoolboys who only show aggressive destructive traits. When separated from an adult world they create their own destructive social system. In the 18th century Europeans couldn’t imagine other rich and meaningful ways of living. We find it hard enough to empathise and interact to any great depth nowadays with other cultures. There is an enormous amount of distrust and misunderstanding. The world is full of problems. This exhibition holds a mirror up to help us reflect what we are as much as it shows the richness and value of the systems of living found in Oceania in the 18th century. 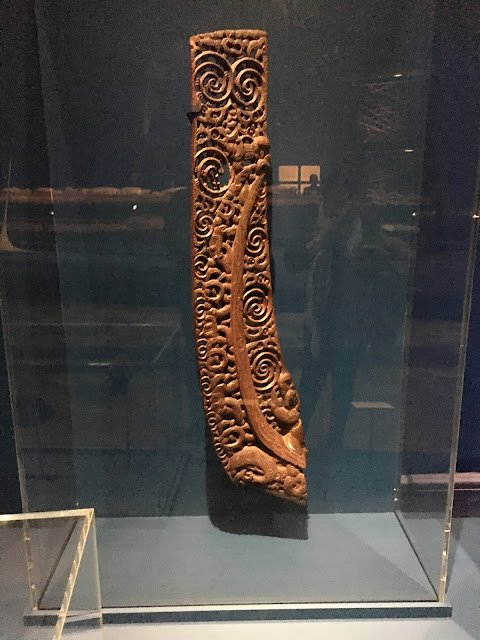 The ornate prow of a war canoe.
The Oceania exhibition is divided into themes, voyaging, settlement and encounters with others. Within these three themes there are navigation, the establishment of communities, that includes politics, Gods and religion, the role of ancestors and the construction of hierarchies. The Polynesian development of a sophisticated culture of giving gifts which aided the creating and maintaining of relations was an important aspect of their inter island relationships. The catastrophic contact with Europeans is explored. Finally, the role of memory and  how the past, including ancestors, were important to life among the islanders. 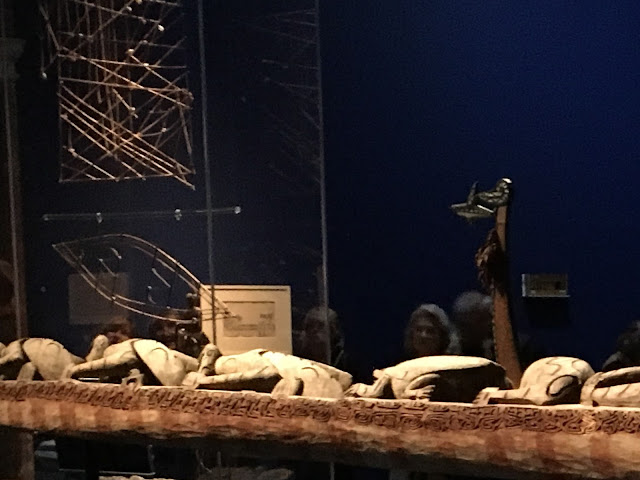 Some stick charts in the background.

One of the most amazing artefacts that depicted the life of the islanders was a stick chart. When James Cook arrived on Tahiti he befriended an islander called Tupaia. Tupaia was an expert navigator and also a priest. Cook was the supreme European navigator,self taught in mathematics, cartography and surveying, who created precise, exact, charts and used sextants which enabled him to navigate by the sun and the stars. Tupaia was just as gifted though he had none of the European navigational instruments. He knew the trade winds and the ocean currents and studied wave patterns. Tupaia constructed stick charts before he took a voyage. A stick chart was a series of sticks in the pattern waves from the prevailing currents and winds made when they reached an island. The island mass would divert the waves in different directions and Tupaia was able to set sail for specific islands by knowing the wave patterns each island created. The Polynesians observed things very closely. 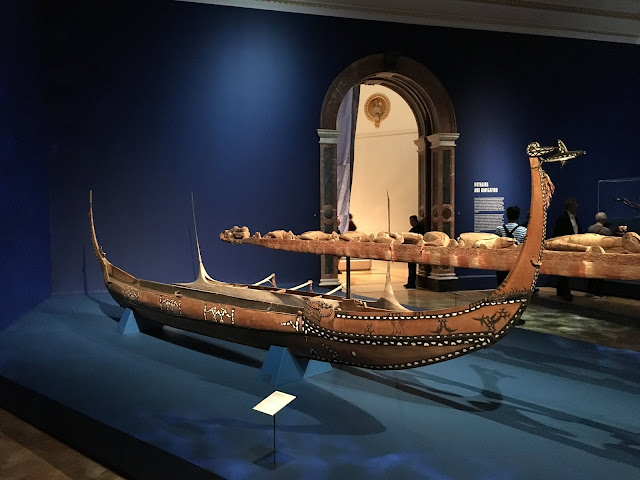 A fishing canoe.
The islanders constructed different types of canoe. Some were for inter-island expeditions,  others were war canoes, some were for fishing and some canoes were designed to travel up and down rivers.  They made them very precisely and covered them in ornaments. One of the prows designed for the front of a war canoe shows a figure, arms outstretched and a long white haunting face staring straight forward. A ,"spirit," coming to get you. 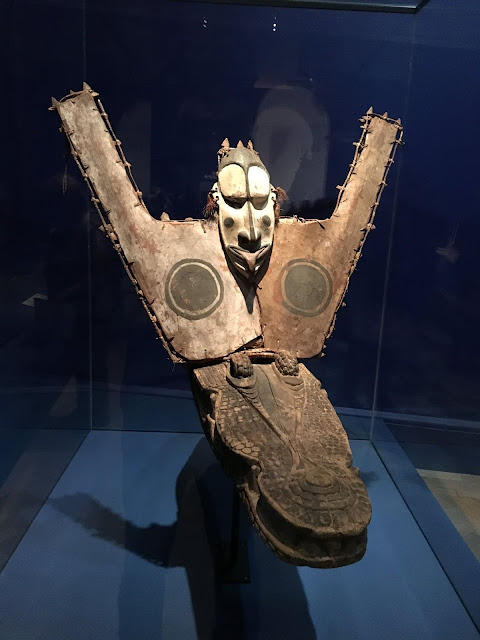 The aggressive prow of a war canoe.
One item that I thought was amazing was a large ceremonial headdress created for a religious festival. It is made of wood, shells, feathers and fish skin and woven with strips of bark and human hair. A triangular head piece, designed to sit on the wearers head, was patterned with flower like roundels made of feathers. From this elaborately patterned head piece long rays, made of sticks and feathers. emanate. It looks like the head and brain of the wearer is sending out  rays of thought and imagination into the space around. 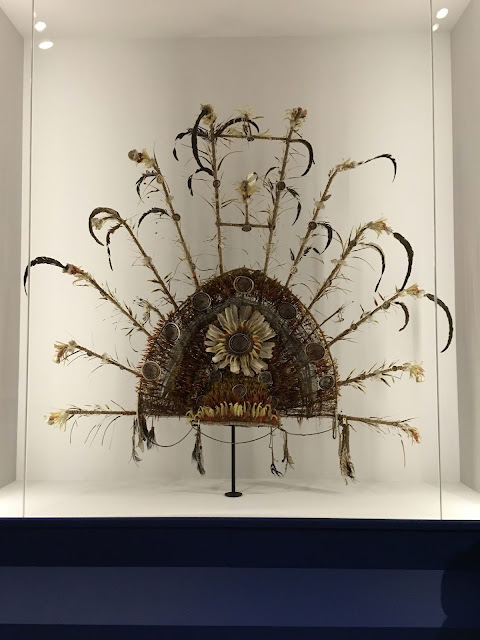 Throughout the exhibition  the idea that the islanders view of life and the world was a personal experience is evident. Each person saw themselves individually attached to the world and they each observed and interacted with the world. 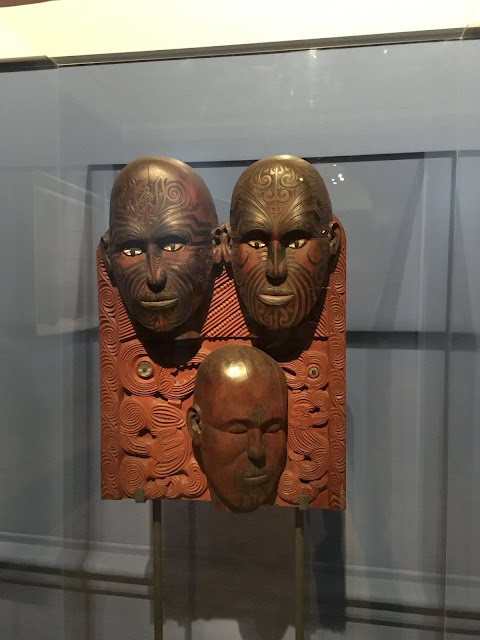 Tatooed faces. Tatooing expressed their personality, status and maturity. The various islanders had no written languages.

In another display two, tall wooden figures of a man and woman stand next to each other. Their sexual organs are prominent. The idea of sexual intercourse and procreation was seen as a vital part of existence. Sexuality had none of the taboos Western cultures and particularly Christianity places on sex.  There was a natural respect for each other. 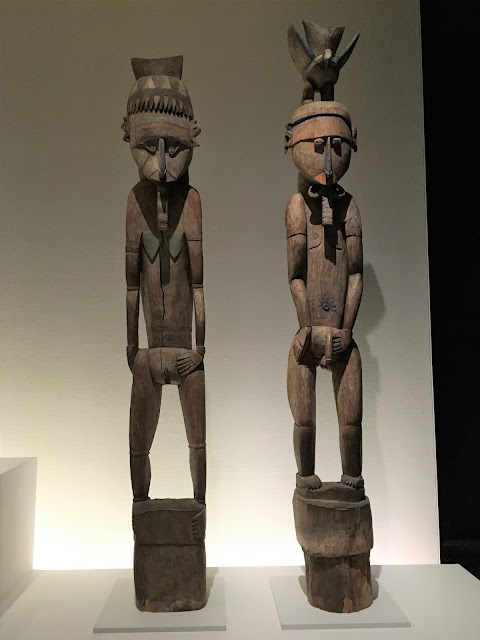 A couple displaying their sexual prowess.
When James Cook and his sailors arrived, the Polynesian women were very friendly towards them and sexual intercourse with the sailors was a common occurrence. The island women saw it as a part of life, creating new life and to have sex with the sailors was an honour for them and a way of interacting with the Europeans on a  personal level. The sailors of course were just fulfilling their lusts. A long feeding trough, that we might liken to a banqueting table, had pictures drawn along the side telling the story of a woman who had heard about a man in a neighbouring village who was endowed with a very long penis. She sent her husband on a quest to befriend this man with the long penis so she could get to know him. All along the side of the feeding trough are men depicted with erect penises trying to show that their penis was the longest. They obviously had a sense of humour about sex. 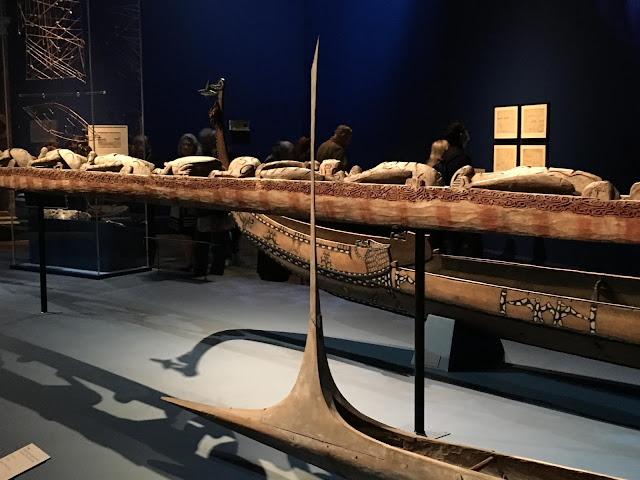 A feeding trough very like a canoe.
A tall drum was displayed in one glass case. Polynesian drums have deep base notes and were used in celebrations and religious ceremonies. The sounds the drums made, set the mood and a rhythm for the event. When Europeans started to arrive, often Christian missionaries arrived too, to bring Christianity to the islanders. The islanders were always open to new ideas and were willing to listen to the missionaries. However, the missionaries insisted they get rid of their tribal practices including their musical instruments, their drums and other artifacts. 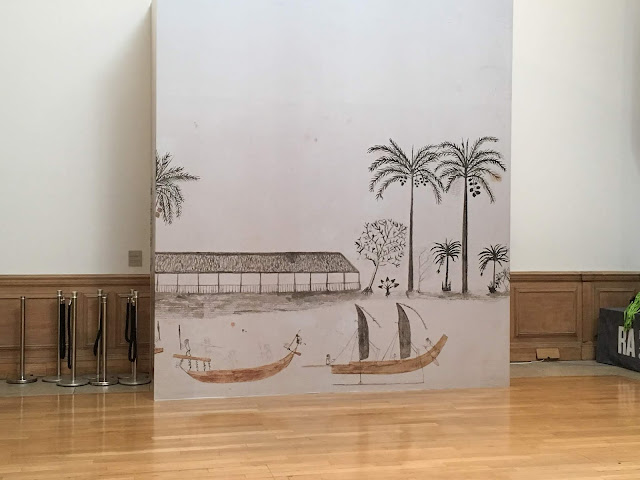 This is a detailed drawing made by,Tupaia, the great navigator and friend of James Cook.

The essence of Christianity is love and one of the greatest commandments that Jesus gave was to love your neighbor as yourself.  I am sure, the islanders already had love of their neighbour as part of their way of life. The missionaries could so easily have focused on this part of their message and helped the islanders include other aspects of ,"loving your neighbour," into their way of life. In return Europeans could have learned from the Polynesians about respecting and having a deep connection with the physical world and the spiritual elements of  water, sea, earth, plants and animals. We might have a different attitude to the natural world nowadays. The missionaries wanted to destroy what they found not learn from it and add to it. 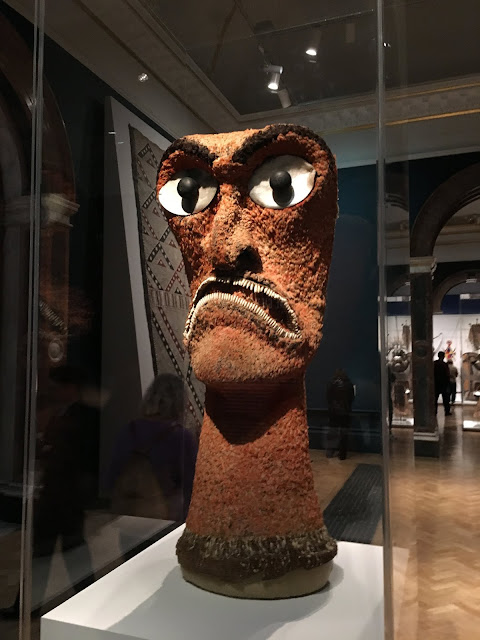 The Polynesians had a gift culture which was part of connecting with other islanders and other peoples. Gifts were a way to forge and develop new relationships. The Europeans were good at taking the gifts and having sex with their women in a greedy avaricious way. European goods were exchanged and the islanders integrated European items into their culture too. The Europeans  brought diseases, including syphilis, and bacterial infections. These were diseases the islanders had not experienced before. The Polynesians were decimated in numbers and many islands were depopulated. 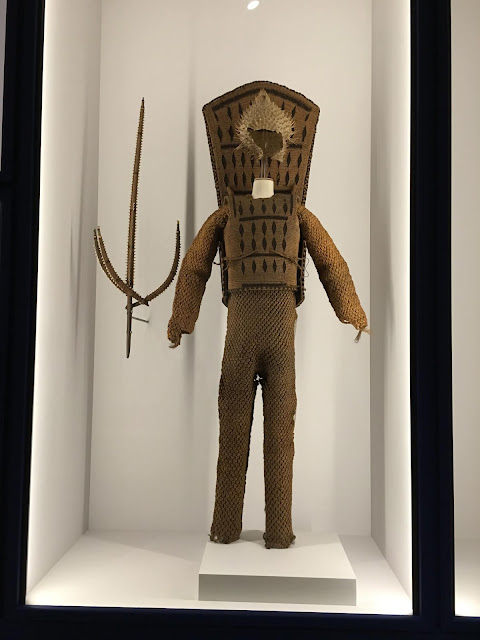 A suit of armour made from bark, wood and fish skins. It could protect against wooden clubs. The helmet is made from fish skin.

It is interesting to find that the islanders who formed cultures separate from European influence regarded war as an important aspect. For a civilisation bound up with good will and friendship, war must have been a last resort. It is interesting to think that islands, many hundreds of miles apart, isolated from each other  and only able to contact each other by their navigational abilities would want to go to war. At what point could war occur? Each set of islanders, Samoans, Marquesans, Tongans, Hawaiians, Tahitians, Maoris, Marshallese and others, had their own fishing grounds. They explored and settled on new islands that had nobody on them. They traded goods between each other. Maybe disputes over land rights, fishing grounds and trading alliances, if they could not be settled amicably, lead to war? 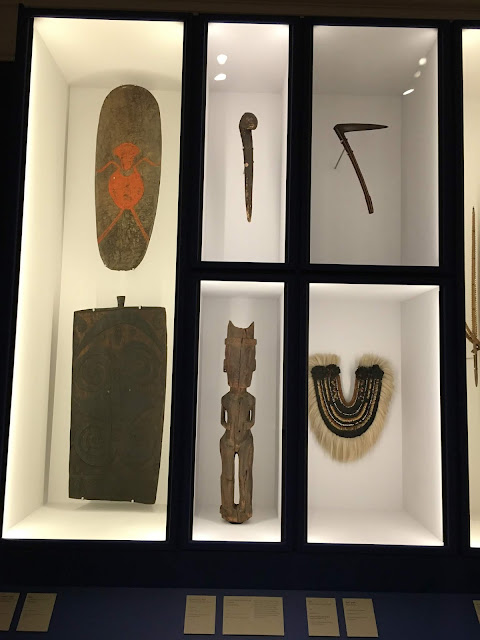 Shields and clubs.
There is the question of cannibalism.  They dismembered enemies taken in war and displayed the parts in various villages and chieftain’s houses. It is interesting to consider what belief system could lead to cannibalism. It gives an insight into how they regarded a human adversary. On his final voyage to the Pacific aboard the Resolution, James Cook was killed and dismembered. Parts of him were probably eaten. Although parts of his body were eventually returned to the British sailors on Resolution after some bargaining. 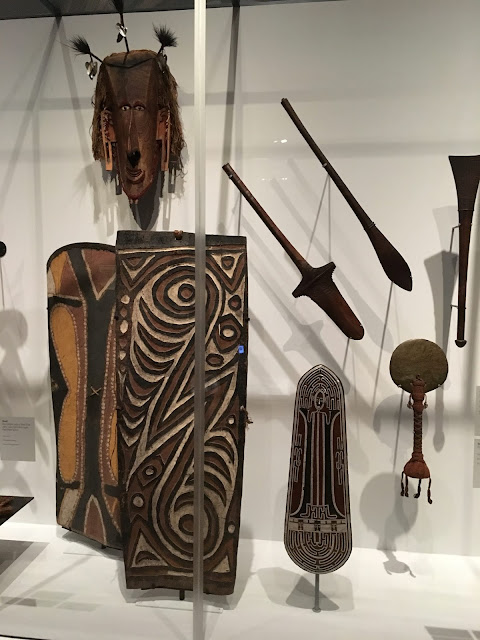 The exhibition starts with a video of Kathy Jetnil Kijner, a poet and activist from the Marshall Islands saying her poem, TELL THEM. The thoughts and ideas and statements Kathy speaks in the poem are relevant at the end of the exhibition too. In the poem she relates how she gives friends, living in the States, a basket with gifts from the Marshall Islands. She describes her people, using imagery and memories, many of which can be traced in the artifacts in the exhibition.  In her poem she tells about the pollution on the beaches and in the sea. She speaks about rising sea levels and drowned villages. 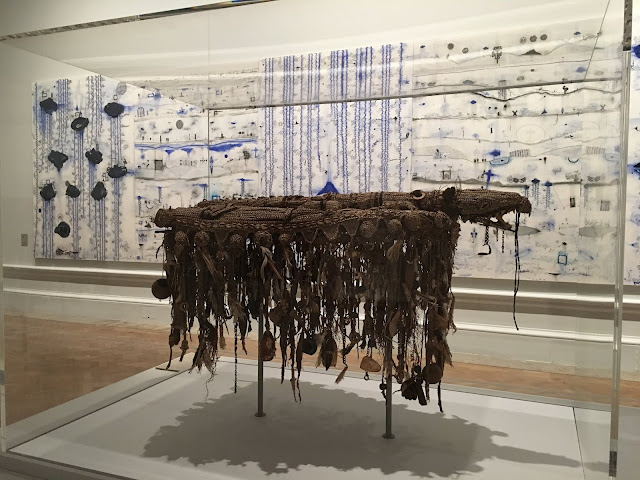 She finishes the poem with:

and after all this
tell them about the water
how we have seen it rising
flooding across our cemeteries
gushing over the sea walls
and crashing against our homes
tell them what it’s like
to see the entire ocean__level___with the land
tell them
we are afraid
tell them we don’t know
of the politics
or the science
but tell them we see
what is in our own backyard
tell them that some of us
are old fishermen who believe that God
made us a promise
some of us
are more sceptical of God
but most importantly tell them
we don’t want to leave
we’ve never wanted to leave
and that we
are nothing without our islands. 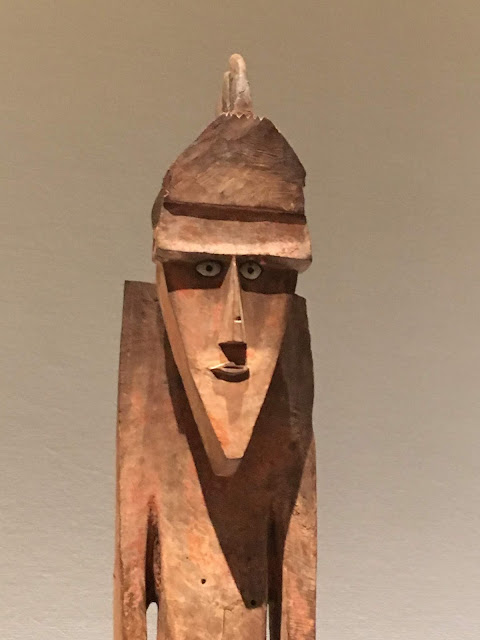