“Painting the Modern Garden, Monet to Matisse .“ At the Royal Academy of Arts, Piccadilly 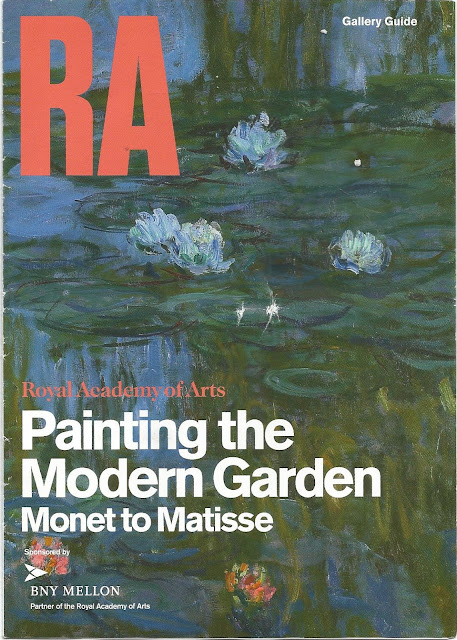 On Saturday 13th February this year Marilyn, Abi and myself went to see, “Painting the Modern Garden Monet to Matisse ,“ at the Royal Academy of Arts, just off Piccadilly.
It was an excellent exhibition displaying pictures from various artists who painted their gardens during the late 1800s into the early 1900s. Claude Monet’s garden pictures dominate, however the exhibition provided a detailed examination of the role of the garden in art and in peoples’ lives of the early 20th century right up to now. It covered all the modern genres of painting, Impressionism, Symbolism and the Avante Garde and also included artists from right across Europe. Of course there are pictures from Monets gardens at Argenteuil and finally Giverny, but also paintings by Gustave Caillebotte, Camille Pisarro and Pierre August Renoir. One painting by Pissaro depicts Monet painting in his garden at Arguenteuil. These garden pictures show the garden as a motif for modern life, relaxation and pleasure and not, as in the past, the utilitarian garden that grew vegetables and produce for eating and source of food and were, in a sense, a part of peoples survival. Other artists include John Singer Sergeants pictures executed in the Cotswold village of Broadway, Laurits Tuxen and Peder Kroyer in Denmark, Karl Nordstrom in Sweden, The German Impressionist Max Liebermann in Berlin and Joaquin Sorolla in Madrid. The American, Childe Hassam has some paintings displayed. He painted the garden of his friend, Celia Thaxter in Maine. This exhibition is not only about the relationship between individual artists and their gardens it also has a broader meaning that encompasses the human relationship with nature and how gardens affect us all psychologically and help shape us as human beings. The artists in this exhibition find symbolic meaning, explore the effects of combining colour and a deeper emotional world through painting their gardens. 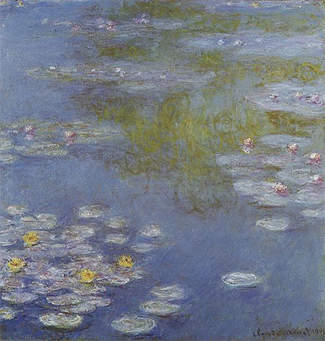 The final room of the exhibiton has a triptych of Monets waterlilies that he painted between 1915 and 1919 covering the period of the first world war. Monet remained at Giverny during this time, which is north west of Paris, throughout the war although many local village people and indeed members of his own family left the area for safety. Giverny was very close to the war front and always there was the possibility that the Germans could overrun Giverny and on their route to  Paris. Monet did not want to leave Giverny ,the source of his inspiration and  wanted to continue painting. Some critics suggest that paintings such as this triptych were Monets response to war and his fears. The triptych is enormous and standing in front of it your sight is filled with the painting and your mind becomes completely taken over. Monet has stopped painting any reference to land or connections with the world. The painting is all water surface with its plays of light and shadow and large patches of waterlily pads and flowers. I could feel myself being absorbed into its depths. It was a sensation of  sinking into the picture. It is as though in painting this Monet was passing into another world away from the terrible strife and unimaginable death  toll happening around him. It is an example of how we can interact with our gardens. 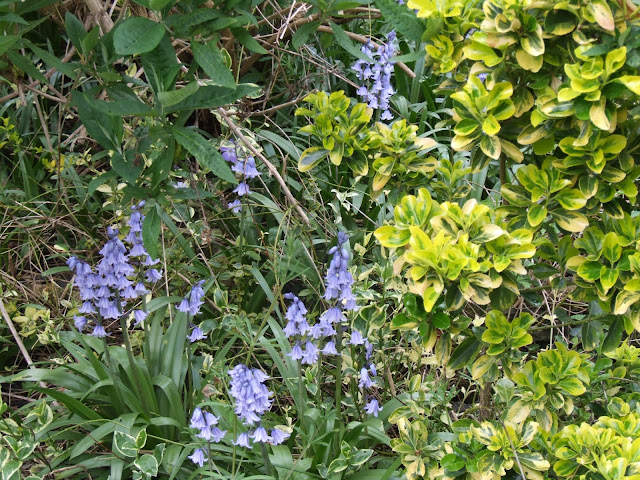 Blue bells at the bottom of my garden.

I can remember as a young child spending a lot of time in my grandparents’ house near to where I lived in Woolston, Southampton. Their garden had various meanings. I was shown the site where the air raid shelter had been dug to protect them from bombing during the Blitz. I was shown pictures of how the garden had been dug over to grow vegetables to help feed themselves during the time of rationing. By the time I was born in 1952 their garden had been turned back to a place of relaxation, flower borders and a lawn.   In the spring there was a patch, near the garden shed at the bottom of the garden, where lily of the valley grew and another patch that produced primroses. The fruit trees growing plums, greengages, cooking apples and eating apples and the cherry tree and the hazelnut tree that had been planted during the war to provide fruit to eat as a part of their austere diet still remained but they had become places of shade in the summer months and were a source of juicy and luscious fruits. 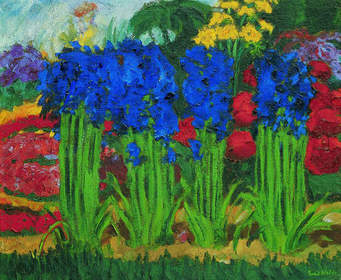 However, it was Mr Biggs’s garden, who was their next door neighbour, that really took hold of my imagination. Sometimes my grandmother and I would squeeze through the gap in the fence  near the bottom of my grandparent’s garden and emerge into Mr Biggs garden. This was perfectly alright to do. The two families, all through the war years, had shared each other’s gardens. My grandparents had provided fruit from their trees for the Biggs family and the Biggs family, whose garden was twice the size of my grandparent’s garden, had a chicken run providing eggs and the occasional chicken to be roasted and eaten. They also had space for a giant compost heap which both families shared. They had a large murky pond covered in water lily pads that held a multitude of fish. The Biggs family shared my grandparents air raid shelter when the warning sirens howled across the district warning of an impending Luftwaffe bombing raid. My grandfather had built an extra-large shelter for this purpose. I remember as a young child walking through Mr Biggs garden. It was populated with all sorts of trees which made it seem like a forest with a tall brick wall dividing the bottom of my grandparents garden from his. It was darkly shaded and blinding splinters of sunlight broke through the foliage in places. The pond, its edges covered in mosses and reeds seemed deep in its glassy blackness and occasionally the back of, a what appeared to me, a giant fish, broke the surface. The compost heap, to one side of the pond, smelled musty and sour with rotting vegetation thrown on it. I can’t explain, but I liked the feeling of being there. It was dark and mysterious. I felt submerged in its shadowy depths. It felt like being inside a fantasy world.I must have felt then like Claude Monet in his garden or Camille Pissaro or Laurtis Tuxen or Joaquin Sorolla, in their gardens. 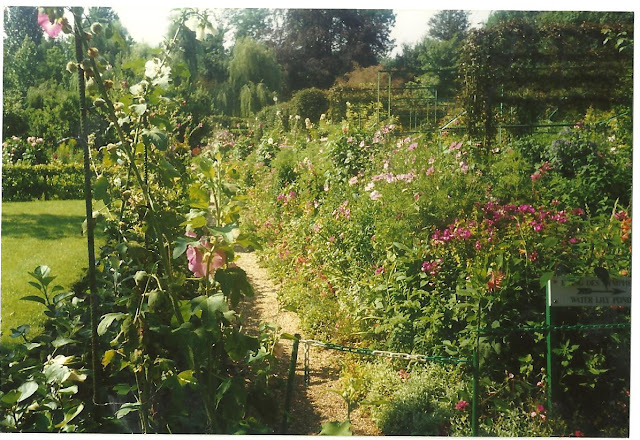 At the back of the guidebook to this exhibition are two pages advertising events and lectures, free talks and family events associated with the exhibition. One particular event caught my eye. An afternoon talk, “ Provocations in Art: Contemporary Urban Gardening.” It was held on Saturday 27th February so I  missed it but the description of the talk got me thinking and exploring the websites of the people involved. It was chaired by the journalist and horticulturalist, Alys Fowler. The ,"guerrilla," gardener and author, Richard Reynolds, forager John Rensten and artist Wendy Shillman took part. I checked out Wendy Stillman first and discovered that she  and her husband have created a small urban garden on the roof top of their house near the BBC Centre just north of Oxford Circus and close to the British telecom Tower. A photograph on her website shows Wendy standing among her plants high above London with the BT tower in the background. She is an urban architect. She lives in an urban environment and combines producing her own food and using her house as a bed and breakfast for visitors to stay so they too can be inspired by her  experience in a big city. John Rensten lives and works in London too. He studies wild food such as fungi, wild flowers and fruits. He has set up an organization called, "Forage London." He takes groups around London and other parts of the country searching for wild, free growing foods and teaching about them. Discovering about Richard Reynolds and his ideas about ,"guerrilla," gardening really inspired me. Reynolds has written and published a book recently entitled,“On Guerrilla Gardening,” In the book he describes gardeners he has met around the world who garden in subversive ways.The book refers to horticultural “sleeper cells” and “shock and awe” plantings, and takes tactical advice from the writings of Che Guevara and Mao Zedong. It all sounds like  1970’s student protest stuff. However it is exciting to learn about his nighttime escapades to isolated pieces of waste land all over London with his followers and collaborators. . Overnight they  plant large waste areas and clean away the detritus of urban living. He has created twenty eight gardens so far. One article about him tells how the authorities, the local councils and the police have confronted him but on the whole have left him in peace. He defines ,"guerilla gardening," as, “ the cultivation of someone else’s land without their permission.” He used his tactics in the Tate Modern. On the 20th October 2015 Cruzvillegas created an installation that he said was inspired by ,"guerilla," gardens. He layed out a whole series of triangular planters filled with soil. However they were under the roof of the Tate Modern and there seemed no prospect of anything growing in these planters. Reynolds and his friend Vanessa Harden prepared some ,"seed bombs," and stood on the balcony overlooking the installation and began throwing the ,”bombs,” into the planters. The Tate Modern wasn’t sure how to react at first but decided it was a positive response to the installation and allowed them to continue with their obviously enthusiastic escapade. Even visitors of all ages attending the gallery joined in. 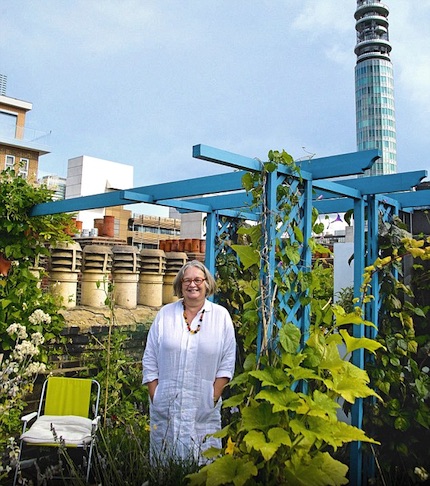 Wendy Stillman in her rooftop garden.

I think these people ,John Rensten, Wendy Stillman and Richard Reynolds are the modern equivalent of Monet and Matisse. They are taking, in some ways, the idea of gardens as being important to peoples emotional, physical and imaginative lives forward into the present day.They are responding to gardens and using gardens in various human contexts. 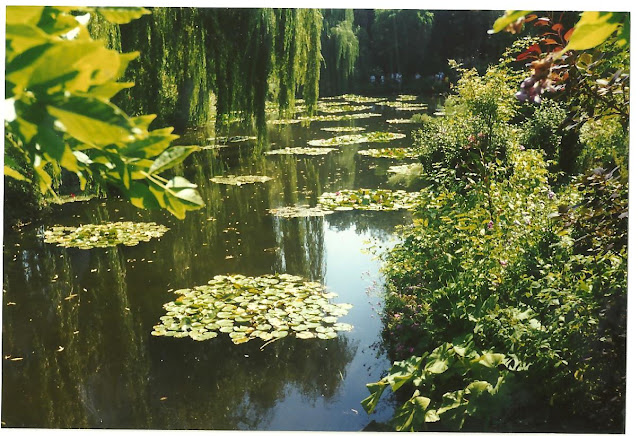 The lily pond at Giverny


The exhibiton of great paintings and the interviews with John Rensten, Wendy Shillman and Richard Reynolds have now inspired me to think of my garden in a range of different ways. I feel inspired to find out about what is there already, to start with. I have a buddleia, some blue bells that shoot up creating a carpet of lush green leaves and blue  flowers in the spring and a couple of  dilapidated looking apple trees,a hydrangea and some other shrubs I do not the names of. I want to plan how I can develop my garden creating colours, smells, light, shade and sounds. This exhibition has got me thinking. Watch this space. The Summer months will give me time to do something. In the words of Citizen Smith of the Tooting Popular front, “Power to the People,” and, my back garden.
Posted by TONY at 10:21:00