A CHRISTMAS CAROL AND THE USE OF LANGUAGE. 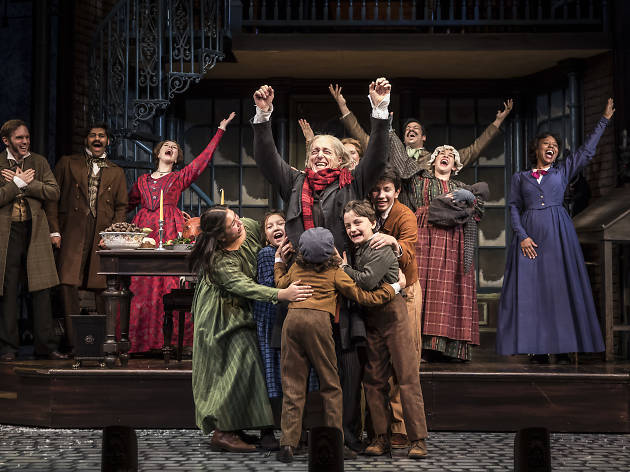 The sentence, “The pen is mightier than the sword,” was coined by English author Edward Bulwer-Lytton in 1839 for his play, “Richelieu; Or the Conspiracy.” It is easy to say, that Bulwer-Lytton’s statement is self-evident. However, it is an interesting concept to look at more closely. It does seem the power of words are a very powerful and potent weapon in all our lives.
Marilyn, Abigail and I went into Kingston upon Thames this afternoon to watch “A Christmas Carol,” at The Rose Theatre, performed by a company of actors along with members of The Rose Youth Theatre in a production adapted and directed by Ciaran McConville. Charles Dickens, the author of A Christmas Carol, himself became wealthy and gained considerable influence in society and throughout the whole world. Dickens was , what might be termed, a ,”superstar,” of the Victorian era. He became so through, primarily, the power of the pen and the written and spoken word. Through words he was able to rise out of poor circumstances and virtual penury and be a powerful influence on those in power and society as a whole.

The actors of  The Rose Theatre's production of A Christmas Carol, use the playwright’s words, interpreting them with meaning. They created a strong, emotional and intellectual response amongst a large audience using words that, were not even their own to begin with but they certainly made those words their own. 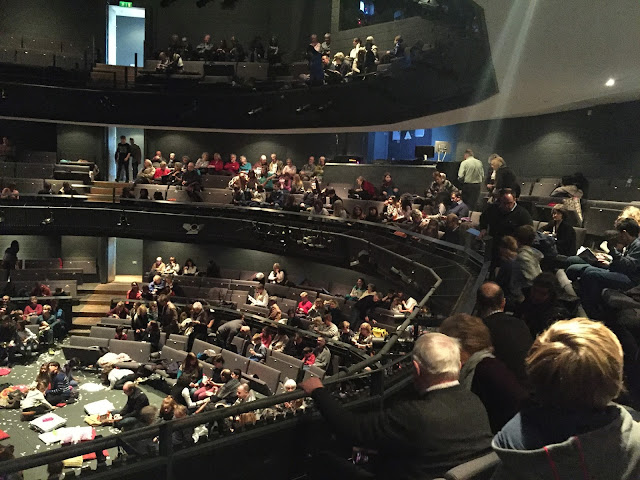 The auditorium of the Rose Theatre Kingston upon Thames at the interval.

This production used children and teenagers from The Rose Youth Theatre. Drama Clubs for children and young people are numerous. My own four children all went to drama clubs when they were young for quite a number of years. In each case they went from the age five or six to at least the age of twelve. Once they went on to secondary schools they stopped but not until they had gained inestimable benefits and enjoyment from participating in all that a drama club offers. Abigail can stand in front of an audience and read a text out clearly and confidently. She can  learn a few lines and speak to an audience with them. Two  powerful and useful skills in our society. It will be interesting to consider how  the ability to use language creatively in various circumstances will help them as they develop into adulthood.

I have been reading ,Landscapes, by Robert McFarlane recently. He has created whole glossaries of words covering all sorts of landscape, often collecting words that have been lost or gone out of use. He states that particular words and language connected with particular places enables those using the words to understand and connect at a deep level with an environment. His book is a collection of glossaries that contain words which describe various landscapes such as mountains, water, coasts, woodland and what he terms as, edge lands. The ability to know and use these words provide great power to the user. Macfarlane sites an example where AMC, a company that develops wind farms and the local council of the Outer Hebrides, wanted to build 240 wind turbines on Brindled Moor. He tells about AMC, the wind turbine company gaining planning permission to build these wind turbines. However, the local community  gathered all the local information they could about the moorland to present to the planning department to prove that the moor is of  natural and scientific importance. Both the council and AMC thought of it  as a useless wilderness, a barren wasteland. The local people won their case because they found words, some that had fallen out of use,  that described the meaning of so many surprising aspects of the moors and hence proved the moors importance. This is a powerful example  of words in action. 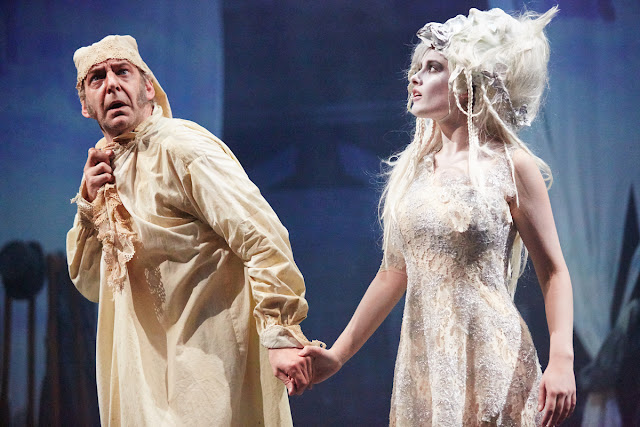 For these sort of productions, such as A Christmas Carol, whole families turn up. It is generally the  mums with their offspring who  attend but you sometimes get Dad's too. Often,more than one family go together.  This observation alone attests to the importance the use of language and words mean to people. It is interesting, for the purpose of the title of this article, to examine the use of language and the conversations that go on among these families. Before I am accused, it sounds as though I might have been eavesdropping, these family groups tend to talk loudly so conversations among them cannot be avoided by those nearby such as myself. By listening to their conversation it is perhaps a little too easy to make assumptions about their education and social background. This of course leads on to a consideration of the power these people might wield in society. What sort of families go to the theater? Do all families from every part of society go?  What might this all mean for society?

So there were Marilyn, Abigail and myself sitting in the audience of The Rose Theatre, maybe ten or fifteen minutes before the production of, A Christmas Carol, began. All around us were vibrant and lively children and vibrant and lively adults mostly talking with clipped, clear, southern home counties accents.

“ Oh Emily, will you sit still? ( said with a slightly strained desperation in the tone). That is your seat.
Robert, come here at once. Stop faffing about,
What ,are, you doing my love?
Take off your coat. You will be too warm.
Arthur,what are you doing as well? Sit down!”
Then to her best friend, who has also brought her sparkling, super bright, beautiful offspring.
“Amelia, we will get them settled soon. Oh by the way, how was yours and Roberts holiday on the Amalfi Coast? Philip and I absolutely loved it when we went. Those villages perched on the cliffs. So delightful. Oh darling,we drank too much Retsina. Got quite drunk one night. Haw! Haw! Antonio, the waiter, he was gorgeous let me tell you. Got me in quite a flutter. I don’t think Philip noticed. Ha! Ha! Well if he did he didn’t say anything the love. Mind you, between you and me and the gate post, I think he fancied the waitress. Ha! Ha! Ha! I didn’t say anything.”

Its not so much the content of this sort of conversation but the absolute confidence it is delivered with.

And so conversations like this all over the theater took place in  groups. These people do not seem to be aware of anybody else. There is something self centered about them. They are the most important people on this earth after all, aren’t they? They speak and use words with enormous confidence. That is the thing that sets them apart.  Words, language derived through their education, have given them this ability. These people are in advertising, or their husbands might be solicitors or doctors. I will leave out teachers and their families, although they could be grouped in this middle class strata of society. There is an element that teacher’s families have, I think, which makes them a little different. Teachers tend to relate wnad work with all of society. But, I am biased!   The middle classes therefore are the mainstay of local theaters such as The Rose in Kingston.These people read novels voraciously, and are the sort who give confident, apt, sometimes humorous speeches at functions and always speak with just the right words and tone. They have the words and confidence to persuade employers to give them a job at interviews. These are just a few examples of the  power of using language well.

These people sitting around us, and these type of families who  fill theaters everywhere, are supremely confident with language. They will know the play, and be able to discuss it confidently. bIf that is not power what is? They know how to persuade and get things done by using language.

So how can this trend for one part of society to claim words and language as their own, spread throughout the rest of society at all levels? In schools the national Curriculum requires all children to study Shakespeare from the age of ten years. All children have to take school library books home to read with their parents and a strict record of this is kept. At sixteen, for their GCSE exams children from all backgrounds have to read a 19th century novel, a piece of modern literature such as George Orwell’s Animal farm, and an American novel such as, John Steinbeck’s, The Grapes of Wrath. They have to read poetry, know even more Shakespeare than they did at the age of twelve and be able to quote from Shakespeare and know not only plots but characterization and how characters interact and different aspects of the arc of the story. They have to know this in some depth, questioning and analyzing the text. They are also taken to the theater to see various productions. This possession of language by all strata’s of society is promoted strongly in schools. Language with all the power it carries is offered to all not just a few. Unfortunately,  some children have to learn to live a double life. They have the rich diverse language they know and learn at school and then when they go home they use an impoverished language. At The Rose Theater there were no working class families. Working class children, because of their experience of language at school would  have accessed the play just as well as those families and children who did go but it is not the done thing for them. This is a great shame.
What is hopeful though is that because they are exposed to a rich variety and use of language at school they may be inspired and make their own decisions as they grow older. At the very least when they do come across this rich use of words during their lives they will not feel completely excluded because they will have experienced it at school.

It really is important to read and write well and use language.