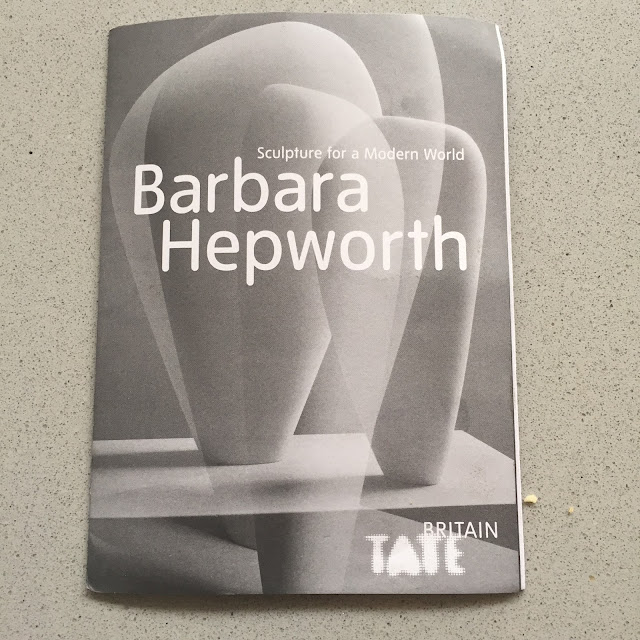 The catalogue to go with the exhibition ticket.
It contains photographs and quotations from Barbara Hepworth.

I went to see the Barbara Hepworth exhibition at the Tate Britain recently. Over the years, on family holidays to Cornwall and specifically to St Ives, we have visited Barbara Hepworth’s home and garden at the Trewyn studios. We enjoyed seeing her workshop with the rusting tools laid out on benches as she may have left them, the stained and used workmen’s overalls hanging on pegs and the rotating wooden platforms she had constructed so she could turn a piece of stone to get to every angle and facet without changing her position and of course changing the angle of light. I love the photographs of Barbara Hepworth relating to her sculptures. You often see her standing next to a sculpture in some stylized pose or sometimes looking through the holes she often created in her sculptures. She liked to show how a human being can interact with her, forms. 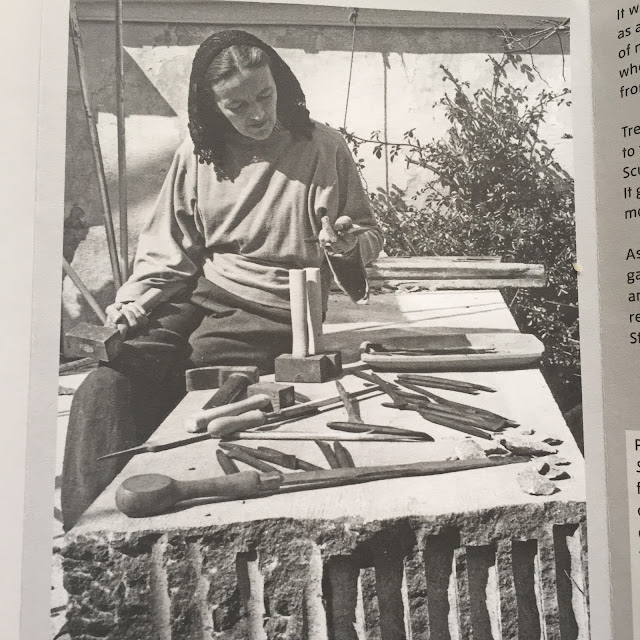 Barbara Hepworth DBE (Born:January 10, 1903, Wakefield  Died: May 20, 1975, St Ives.) posing with some of her tools.Every photograph was staged to give meaning.

Also she was intellectually concerned with the way her sculptures fitted into and interacted with their surroundings. Her garden at the Trewyn studio is a great example of this. Her sculptures relate to plants, leaves, the sky and each other within the garden. It is as though some sort of discourse is taking place between every element of the whole. Her writing often discusses form, its meaning and its effects on us. Her sculptures were not meant to represent, things or something we know but to create a spiritual essence a new sort of life that affected us spiritually. They are really abstract. Her adherence to Christian Science as espoused by the American Mary Baker Eddy is one explanation for Hepworth’s thinking, “the spiritual world is the only reality.”
I was not permitted to take photographs in the exhibition. I took photographs of the pictures in the small catalogue that I was provided with  to go with my entrance ticket. 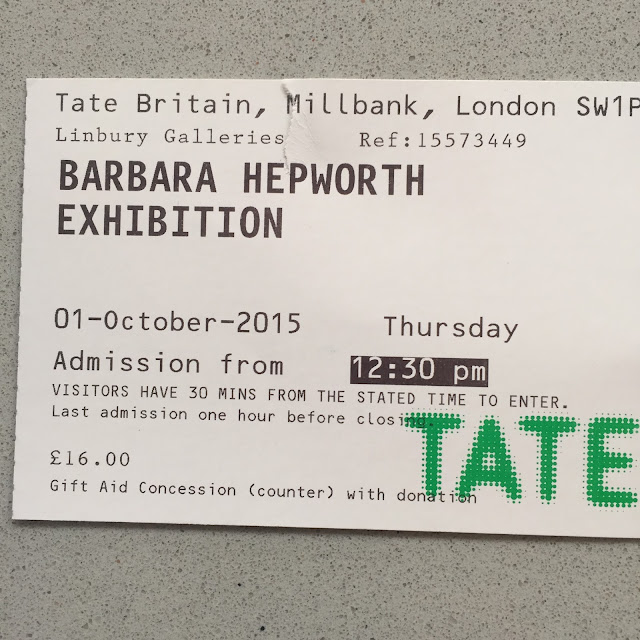 My ticket for the exhibition.

When we as a family visited her Trewyn studios in St Ives I also took  photographs of her garden so I will show some of those here.


Barbara Hepworth wrote many articles for architectural magazines and art magazines explaining  her thoughts and ideas. To go with my pictures, I have used  quotations from these journals to annotate my pictures.Hepworth herself took  photographs of her work. 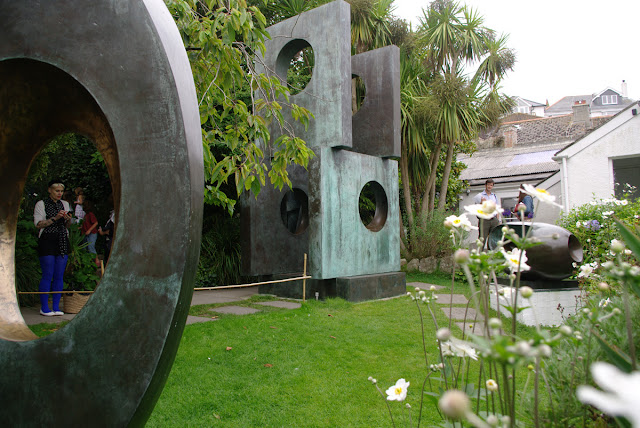 The Trewyn Garden and studio at St Ives.

"Carving to me is more interesting than modelling, because there is an unlimited variety of materials from which to draw inspiration. Each material demands a particular treatment and there are an infinite number of subjects in life each to be re-created in a particular material. In fact, it would be possible to carve the same subject in a different stone each time, throughout life, without a repetition of form." 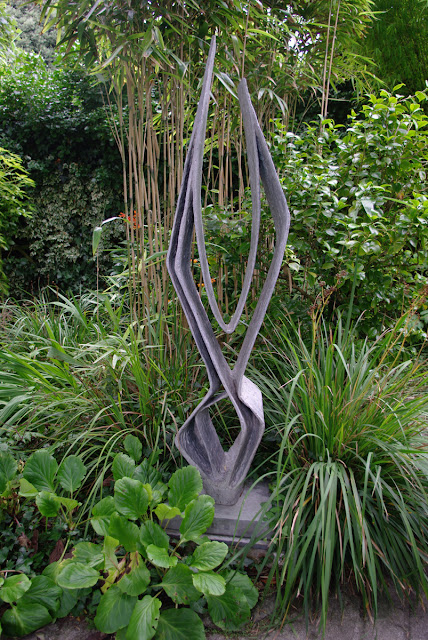 "There must be a perfect unity between the idea, the substance and the dimension: this unity gives scale... Vitality is not a physical, organic attribute of sculpture - it is a spiritual inner life." 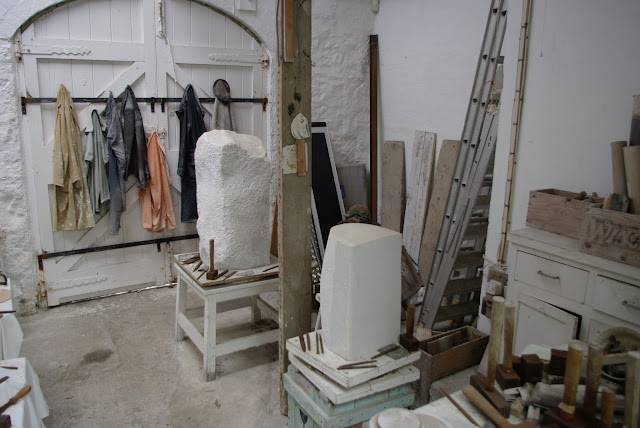 Inside The Trewyn workshop. Notice the coats and overalls left hanging on the rail ready for use.

"Art at the moment is thrilling. The work of the artist today springs from innate impulses towards life, towards growth - impulses whose rhythms and structures have to do with the power and insistence of life." 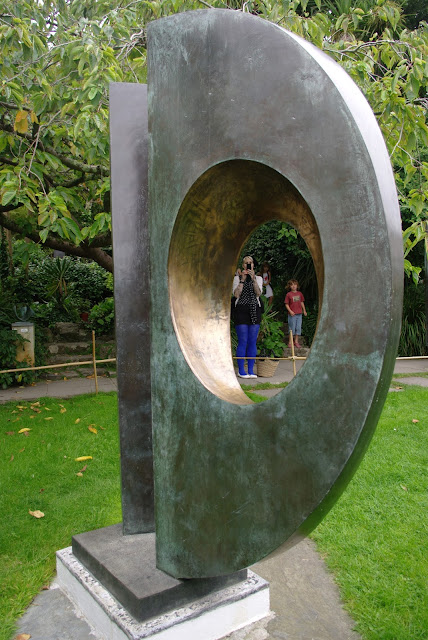 "I have always been interested in oval or ovoid shapes. The first carvings were simple realistic oval forms of the human head or of a bird. Gradually my interest grew in more abstract values - the weight, poise, and curvature of the ovoid as a basic form. The carving and piercing of such a form seems to open up an infinite variety of continuous curves in the third dimension, changing in accordance with the contours of the original ovoid and with the degree of penetration of the material. Here is sufficient field for exploration to last a lifetime." 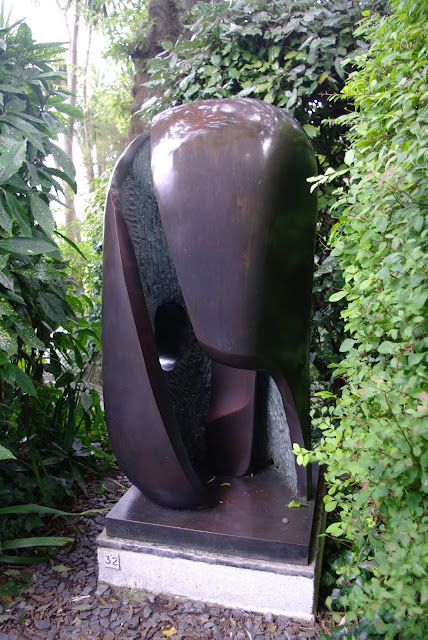 "There is an inside and an outside to every form. When they are in special accord, as for instance a nut in its shell or a child in the womb, or in the structure of shells or crystals, or when one senses the architecture of bones in the human figure, then I am most drawn to the effect of light. Every shadow cast by the sun from an ever-varying angle reveals the harmony of the inside to outside. Light gives full play to our tactile perceptions through the experience of our eyes, and the vitality of forms is revealed by the interplay between space and volume." 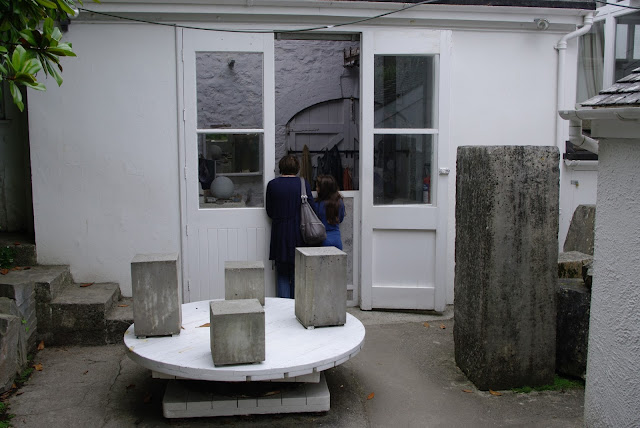 One of the wooden turntables Hepworth had made so she could carve stone outside in the open. 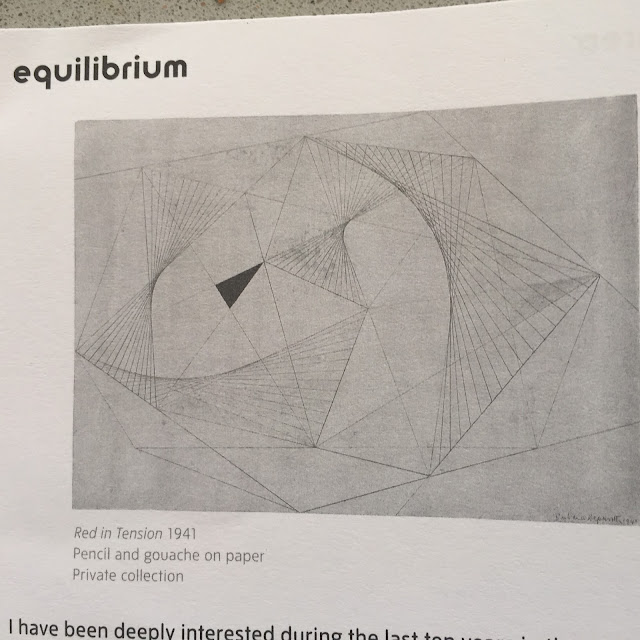 "In the late evenings, and during the night I did innumerable drawings in gouache and pencil – all of them abstract, and all them my own way of exploring the particular tensions and relationships of form and colour which were to occupy me in sculpture during the later years of the war. At that time I was reading very extensively and I became concerned as to the true relationship of the artist and society. I remember expecting the major upheaval of war to change my outlook; but it seemed as though the worse the international scene became the more determined and passionate became my desire to find a full expression of the ideas which had germinated before the war broke out, retaining freedom to do so whilst carrying out what was demanded of me as a human being." 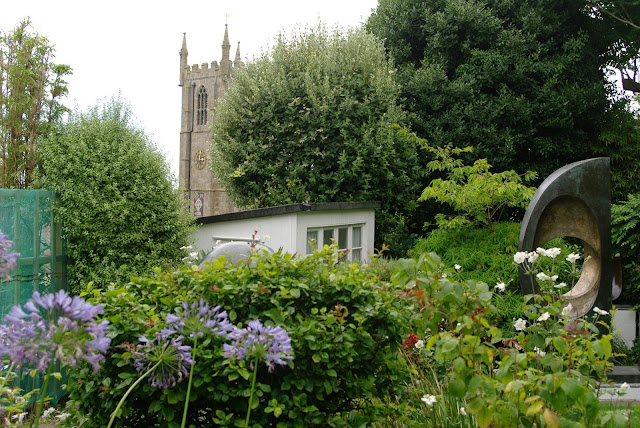 "So many ideas spring from an inside response to form: for example, if I see a woman carrying a child in her arms it is not so much what I see that affects me, but what I feel within my own body. There is an immediate transference of sensation, a response within to the rhythm of weight, balance and tension of the large and small form making an interior organic whole." 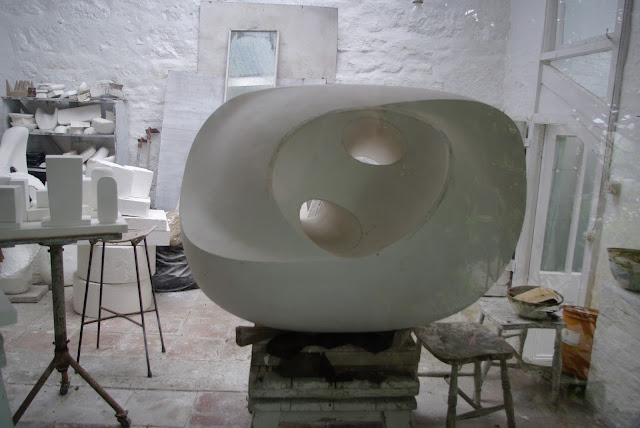 Inside the studio at Trewyn.

"If human beings respond so decisively to mood and environment, and also to space and proportion in architecture, then it is possible to, and imperative that we should, rediscover those perceptions in ourselves, so that architecture and sculpture can in the future evoke those definite responses in human beings which grew with Venice and still live to-day." 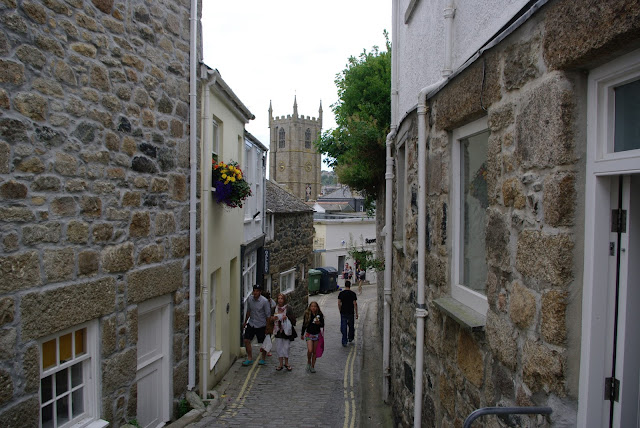 Outside the door to the Trewyn Gallery. 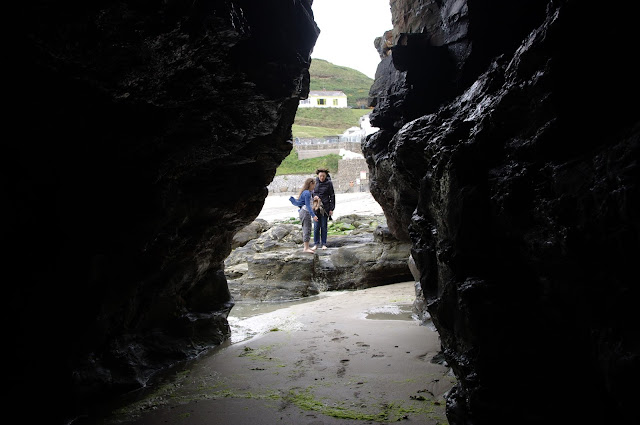 A cave along the coast from St Ives. The Yorkshire landscape and then the landscape of Cornwall influenced Barbara Hepworth. You can walk around, look through and almost get inside her sculptures as you can with many Cornish landscape features.

"All my early memories are of forms and shapes and textures. Moving through and over the West Riding landscape with my father in his car, the hills were sculptures; the roads defined the form. Above all, there was the sensation of moving physically over the contours of fulnesses and concavities, through hollows and over peaks – feeling, touching, seeing, through mind and hand and eye. This sensation has never left me. I, the sculptor, am the landscape. I am the form and I am the hollow, the thrust and the contour." 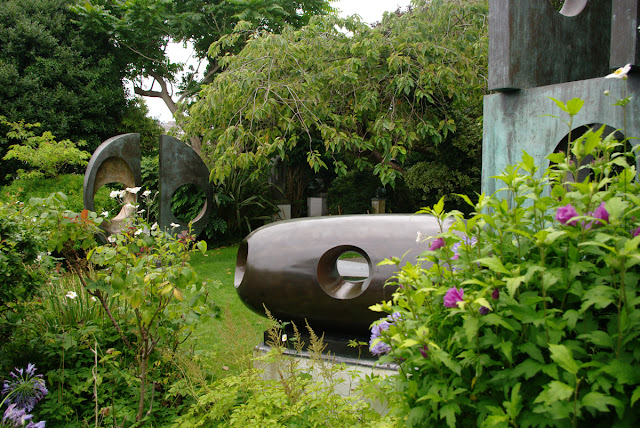 A view showing how the sculptures interrelate with each other  and the leaves and structures of the trees. How they relate to their surroundings.One of her great problems was to solve  how art fits in with the built environment.
References: