A definition of what good design is as difficult to come by as a definition for what the word, art, means and art is impossible to define really. Here are a few attempts.
“Good design is not just what looks good. It also needs to perform, convert, astonish, and fulfil its purpose. It can be innovative or it might just get the job done.”
“A good design cannot be measured by a finite way – multiple perspectives are needed.”

Also
“Design is the way we decide how we want things to be. Everything we make is designed by somebody. So the question is not whether we need or can afford design. It’s whether design is good enough.
Richard Simmons Chief executive, CABE (Commission for Architecture and the Built Environment)
And
“The stock answer is that good design is generally a combination of different qualities - what it does, what it looks like, and so on. But as our expectations of design change, so do those qualities and the relationship between them.”
Alice Rawstham (design critic) writing in the New York Times, June 2008

There are many more sources where definitions of good design can be found but these, I think, cover the generally accepted ideas even though they are merely generalisations. It is difficult to pin down a truly satisfactory definition maybe because new designs to solve new problems are always being created. Especially with modern technologies new things never seen or imagined before are being created.
Roughly speaking then, good design is about ensuring something is able to do a job well. It can be easily  used for its purpose. Often, just by looking at a well-designed artefact, you can see immediately what it is for. A side effect of a well-designed artefact is that it has elegance and beauty. Maybe that is what beauty is, if something works well and does a job it is beautiful and elegant. 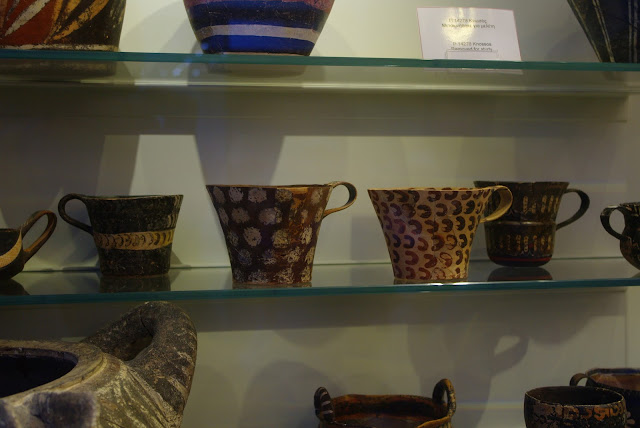 Minoan cups from about 1500BCE


This all leads to the moment when I walked into the rooms I and II on the ground floor of Heraklion Archaeological Museum during our recent holiday on Crete. Most of the museum has artefacts from the Minoan period, a very sophisticated Bronze Age civilisation that was centred on Crete and the island of Santorini before the catastrophic explosion of the volcano at Santorini in about 1450BCE. The Minoan Civilisation lasted from approximately 2600 to 1400 BCE. A lot of the artefacts come from Arthur Evans excavations at Knossos, the main Minoan palace on Crete but there were also many artefacts from the other Minoan palaces, country houses and temples located at Phaistos, Gallitos, Mallia and Hersinnosis. Rooms I and II have many pottery artefacts from Knossos. There in front of me was an elegant cup with a handle attached to one side, perfectly turned on a potter’s wheel, sitting there on a tray. It was ready to be used for afternoon tea  in one of Jane Austens drawing rooms. I felt immediately disoriented. How could this be?
This cup was 3,500 years old. Cups with handles looking identical to this one were designed for use in English drawing rooms in the 19th century. The tea trade with China brought with it tea bowls from China to drink tea from. However, the Britiish liked their tea hot and the design was adapted by adding a small handle to one side so we didn’t burn our hands. Drinking from saucers, to cool the tea, as an alternative, was quickly passed by. New manners and tea drinking conventions were created. A tea etiquette was created to go with teacups with handles that sat on small saucers to protect the varnished and veneered table surfaces they were placed on. But here was a tea cup that was designed well before the British Empire was thought of, long before tea drinking was even imagined, when here in Britain we lived in mud and thatched roofed houses, hunted with flint tipped arrows and were just beginning to create cast iron and bronze artefacts in small furnaces. We were a hunter gatherer society slowly settling into a more rural farming lifestyle.
The cups in Heraklion Museum were designed almost identically to the cups first designed in the 19th century. If we agree that design, using our earlier definitions, are for a given purpose then surely these Minoan cups must have been designed for a very similar purpose. 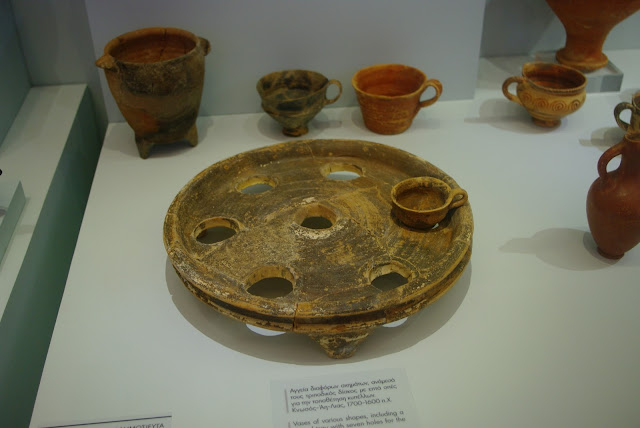 A tray to hold six cups and a teapot? "Afternoon tea Jeeves!"
There were many examples of cups with handles in the Heraklion Museum. They are round in shape and taper from the top to the bottom getting narrower at the flat base. A flat base enabling the cup to stand on a flat surface without being unstable. From visual evidence the volume of liquid each cup could hold looked about the same as a 19th century or modern cup will hold. In one display cabinet there was a circular tray with holes in it to rest a series of cups on. This suggests they were used when a group of people gathered for some purpose somewhat like afternoon tea with a group of friends. The small round handles attached to one side suggest that the cups were held in the same way as their modern counterparts. I can just imagine an ancient Minoan, man or woman, sticking out their little,”pinky,” and delicately raising the cup to their lips. "Pleasant weather we are having Elizabeth."
In the 19th century the handle was a necessary design feature because the liquid inside the cup was hot. I can only guess that the liquid the Minoans drank in these cups must have been hot too. However, I am sure it was not hot tea. I decided to find out about  the Minoan diet and maybe discover if there were any drinks they might have drunk hot. Surprisingly, nowadays scientists can discover what ancient people ate and drank from their eating and drinking vessels. Scrapings from the inside of containers can be examined and their molecular structure can reveal what foods and drinks had been used in them. The Minoans drank a variety of wines produced on Crete but also imported from around the Mediterranean. Of course they ate olives and used olive oil in their cooking. They sweetened their food with honey. They also made a form of mead using honey. Interestingly I discovered that Herodotus, the Ancient Greek historian, living about 500BCE, wrote about the drinking of mulled wines and meads. Mulling a wine involves adding spices and herbs to a drink and then heating it until it is hot. This was the only mention of a hot drink in the ancient world I could find. We know wine drinking and mead drinking was popular amongst the Minoans so why wouldn’t they mull their drinks? A,”tea cup,” with a handle would be ideal to drink hot mulled wine from. 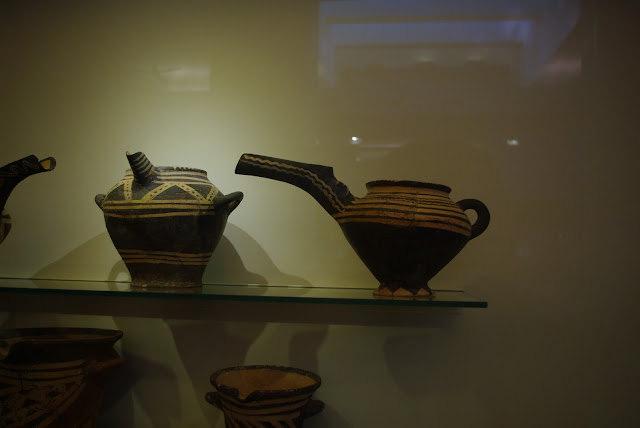 "Will you pour or shall I?"
One more thing. Drinking a hot drink from a cup with a handle solves one problem. However, the hot drink has to get into the cup. In the 19th century and nowadays we use a tea pot, with a lid and a long spout enables us to poor  the steaming liquid accurately into the cup. A large handle, large enough for our hand to hold the teapot firmly is placed to one side of the teapot to make it easy to  lift and pour. So what about the Minoans and their hot drink? They would want to pour it accurately and carefully into each cup on their tray too before serving. Yes, they designed a ,”teapot,” with a spout and handle. Amazing!! Their teapot looks a much better designed pot than our version. Claris Cliffe herself would have been proud of designing the Minoan teapot.
I am sure Jane Austen would approve.