A story about Charles Dickens for Christmas!!!!!

A news article, published today on the BBC website, describes how Charles Dicken’s lobbied for his own personal letter box to be installed in the brick wall that separated his garden and house at Gads Hill, from the main road. 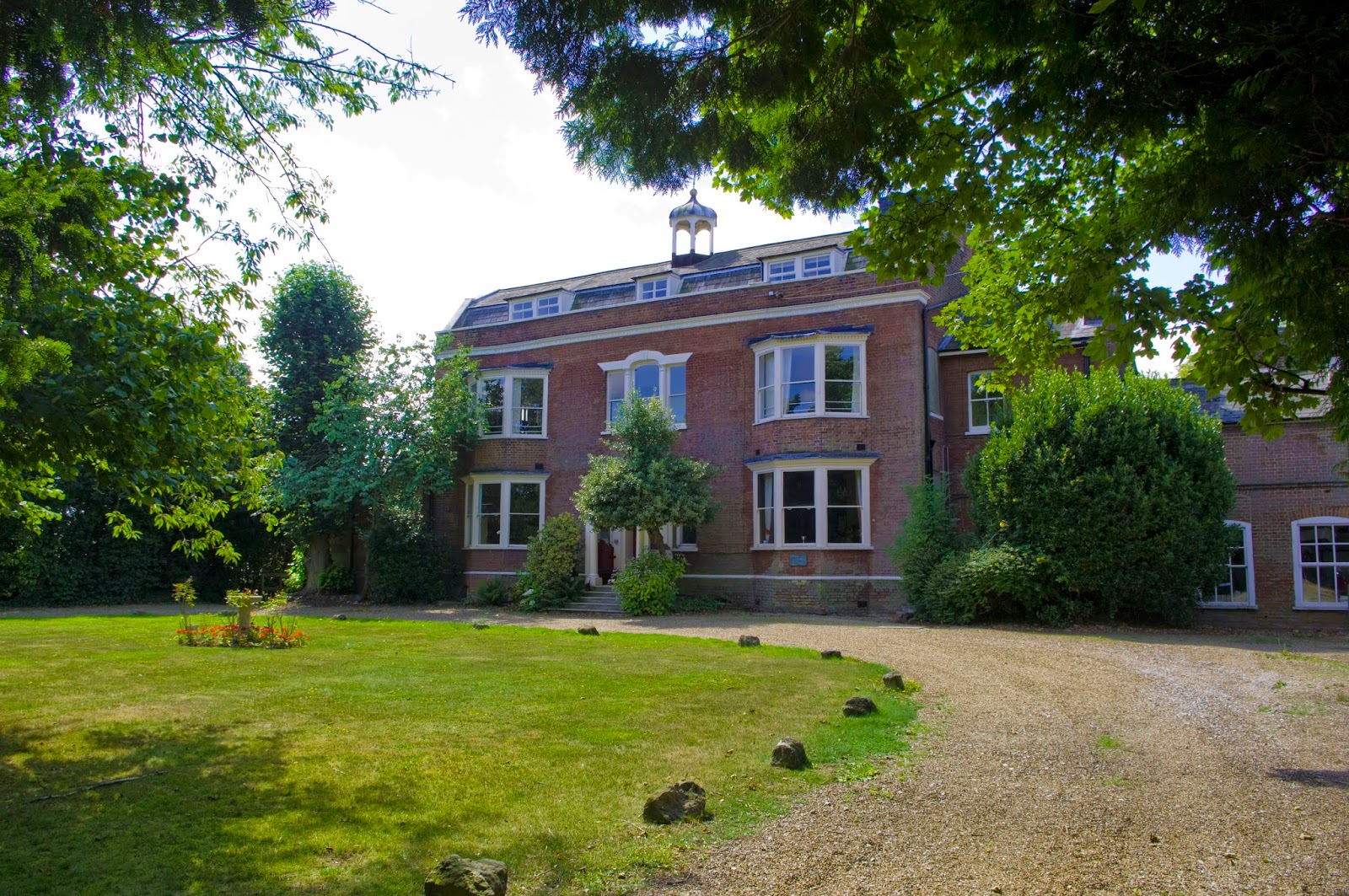 In the 19th Century, when the postal service was in its infancy, Charles Dickens lobbied for his own personal letterbox, writes Kathryn Westcott.
It's Christmas 1869 and Charles Dickens, prolific letter writer, is hurriedly finishing off a correspondence. "The postman is waiting at the gate to tramp through the snow to Rochester and is unlawfully drinking a glass of gin while I write this," Dickens reveals to his friend Charles Kent.
The postman was a familiar sight at Dickens's Georgian home, Gad's Hill Place in Higham, Kent. A postbox, installed by the postal service at the author's request, was one of the earliest wall-boxes to be introduced in Britain, following the introduction of the pillar box across the nation by fellow writer Anthony Trollope in 1852.
Dickens had personally lobbied for that postbox in 1859. Perhaps acting on a tip-off by friend and writer Edmund Yates, who worked in the Postmaster General's office, he replies to a correspondence from Yates stating:
"I think that no one seeing the place can well doubt that my house at Gad's Hill is the place for the letter-box. The wall is accessible by all sorts and conditions of men, on the bold high road, and the house altogether is the great landmark of the whole neighbourhood. Captain Goldsmith's house is up a lane considerably off the high road; but he has a garden wall abutting on the road itself..." 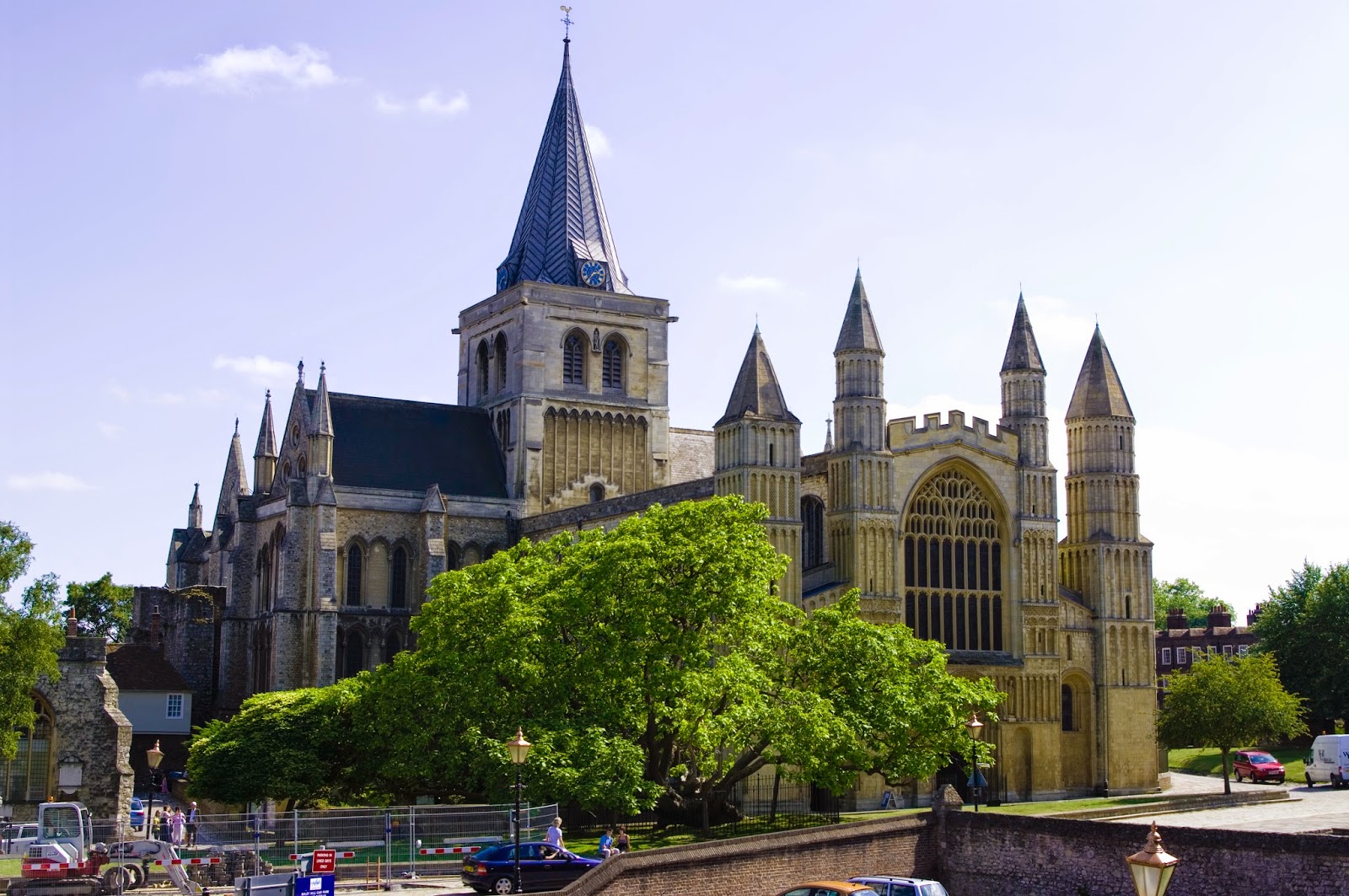 In August of 2009 my friend ,Clive, and I drove down from London to Rochester for the day. We visited many of the Dickens sites, such as Rochester Cathedral, where Edwin Drood, Dicken’s final and unfinished novel plays out its dark and mysterious plot. We stood outside of  Satis House at the end of the High Street which Dickens used in Great Expectations as the home of Miss Haversham. We lingered outside the old town hall, now Rochester Museum, where Joe Gargery took Pip to be indentured. 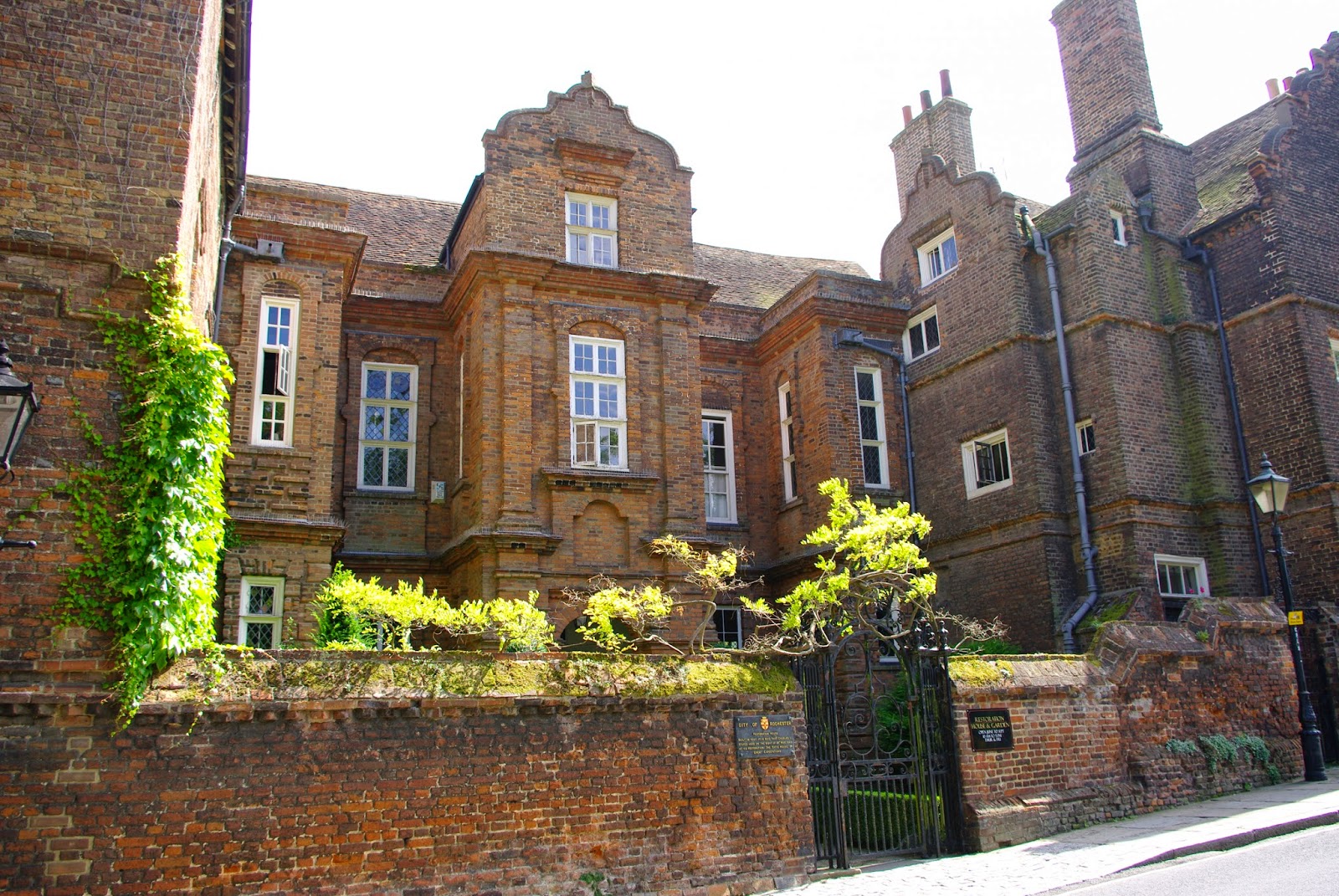 We found the Swiss Chalet situated behind buildings off the High Street, now removed from Gads Hill. It was a present from a friend, Dickens had it constructed in his garden.  It was where he escaped to write in privacy. We photographed The Royal Victoria and Bull Hotel where, not only Dickens and his friends sometimes stayed, but where the illustrious Mr Pickwick resided.Rochester and, The Bull, mark the start of Pickwicks travels. 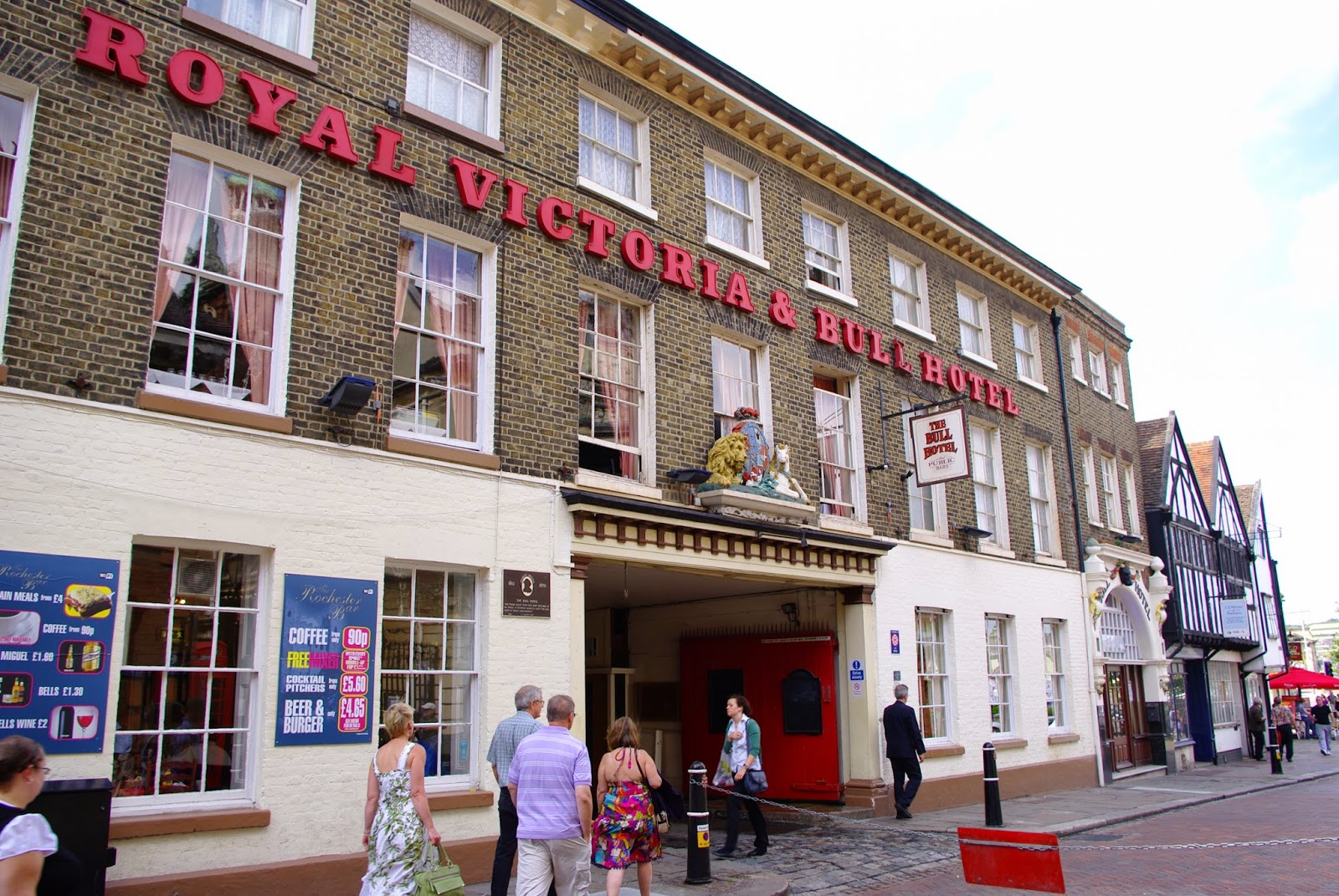 The Bull
Without a doubt Clive and I made our way out of Rochester across the bridge over The Medway and up to the top of Gads Hill to visit Gads Hill Place, Dickens final residence and where he died.
Gads Hill Place is an imposing, large Victorian house set back from the main road within ample grounds. Shrubs and trees shade it. A crescent drive enters, from the road at one side, arcs round to the front door of the house and then curves round to the other side of the property to re-enter the main road again. A brick wall fronts the property separating it from the pavement and main road. 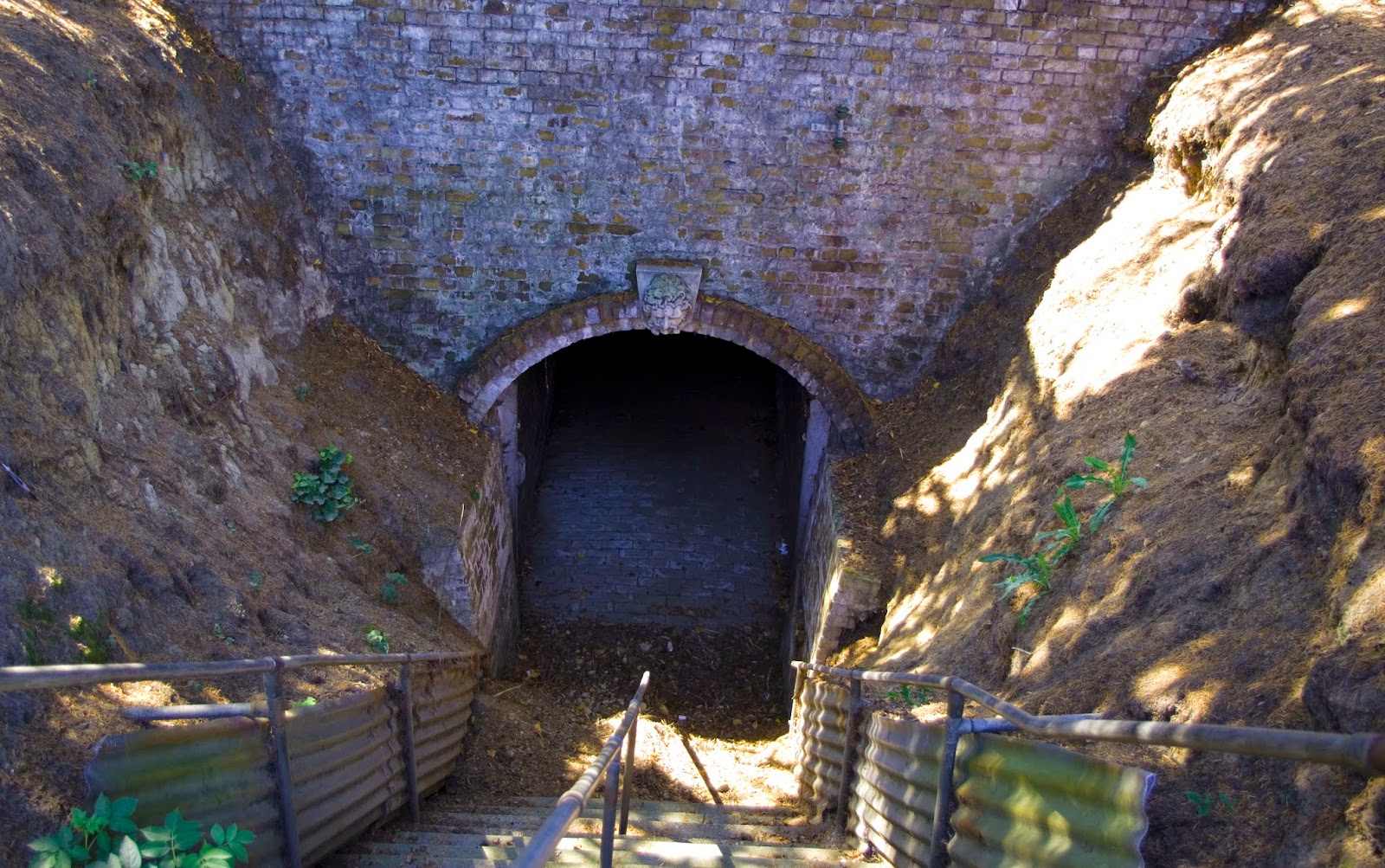 The tunnel to the Swiss Chalet.
There are two unique features to Gads Hill Place and gardens that are observable from outside. The most obviously noticeable are the steep sloping steps that lead from the front of the house down into the ground to a wide, high arched tunnel. The floor of the tunnel is cobbled. It leads under the road to where a small plot of land is grassed over, surrounded by shrubs and trees, with a bench to sit on. On this piece of land Dickens had his Swiss Chalet initially erected. When you study the tunnel and its entrance and exit you can imagine Dickens briskly entering the tunnel and emerging the other side to climb up the opposite set of steep steps to his Swiss Chalet.  I wonder how much the process of using the tunnel created a sense of entering another world? 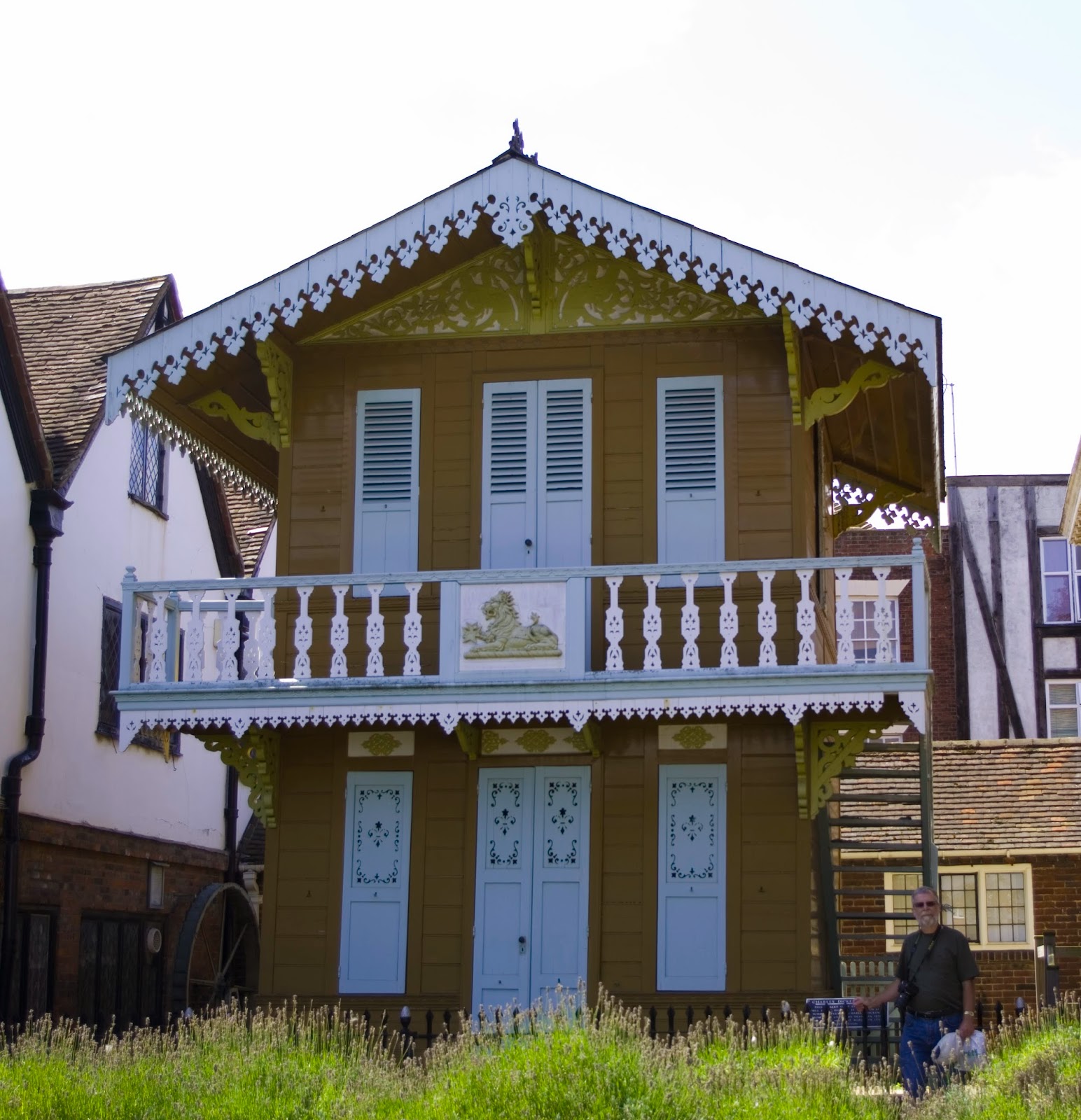 The Swiss Chalet Dickens used for writing. It was here that he was writing Edwin Drood before he died.
The other feature is something you might miss. It is a dull  metal oblong plate, about thirty inches in height and about ten inches wide fixed into the brick wall fronting the road. This piece of metal is covered in flaking red paint and has patches of rust covering it. On it is embossed the words, LETTER BOX."

Underneath that title is a royal crown with the capital letters V and R situated either side.
Under the crown are the words ,"cleared  at," Two  holes made below this statement show where a metal holder was positioned to take the collection time sign.This is the letter box Dickens lobbied to have installed at Gads Hill.