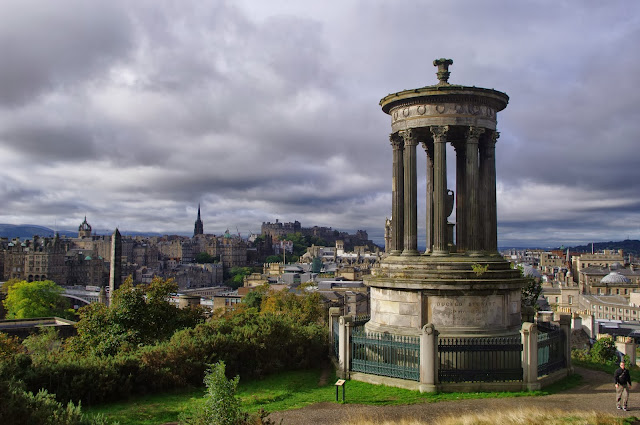 I have spent the last four days in Edinburgh, by myself.
After I had registered at the Priestfield bed and breakfast, just a little out from the centre of Edinburgh I walked into the centre of the city. The bed and breakfast was situated just off the Jedburgh Road and close to the base of Arthur's Seat and Salisbury Crags, a great volcanic shelf of basalts and granites tilted up like a rough lop sided table top, savage and rugged, reminding Edinburgh of its volcanic origins,

I was in the High Street, the Royal Mile, just by the road that slips down to the North Bridge. The Royal Mile sloped down to my right, grey cobbled, hard granite buildings, four or five storeys high. St Giles Cathedral with its granite crown surmounting its main tower to my left.
I was on my own, in twilight Edinburgh, and the streets were full of people, partners, families and groups of friends, talking, laughing, being together and I was on my own. I began to have that dull feeling, slightly panicky feeling, when you have nobody to talk to; you stand on your own; you try not to be noticed and make people think, he’s on his own. You try to look as though you are about to meet somebody or you are stopping for a short moment before you go to meet somebody. You have a nonchalant air and look about you as though  you don’t care about being on your own, because it won’t be for long. You try to portray that image and I very quickly found myself doing that. It was a subconscious act; a survival tactic emerging from a natural human impulse. I felt uncomfortable and the thought seeped into my brain that I have three more days of this feeling. What should I do?

I walked up and down the Royal Mile, just looking. If I kept active, looking and thinking about things, learning as I went, that could occupy me and create a way of interacting and learning even if it was just with my surroundings. My time would not all be, feeling alone.I was going to be positive or as positive as I could. This would be a good experience
.
The time was getting on towards eight o'clock on that first evening and I hadn't eaten. I started looking at places to eat. All the pubs, their bright glossy fronts, red or green or blue areas of gloss paint, had their menus displayed prominently. The prices didn't matter. How was I to get inside, get a table, order some food? That was what concerned me. On my own in those packed establishments heaving with people who all knew somebody, who all had somebody to talk to, how was I going to do this? I didn't have the courage at first to just go in and brave it. 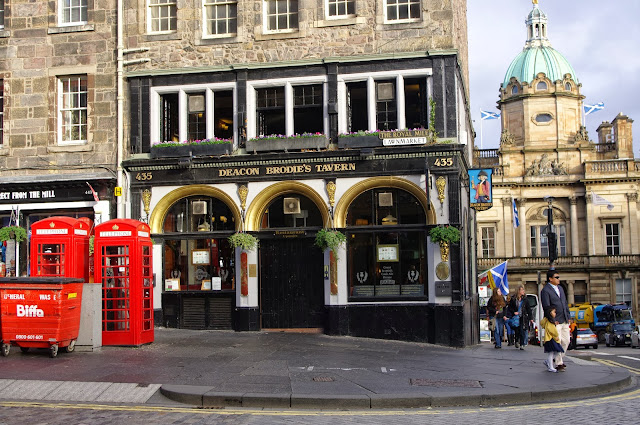 Deacon Brodies on The Royal Mile.

I saw a pub called Deacon Brodie’s that had a garish life size portrait of the deacon on the outside in his 18th century attire. He looked coarse, a little worse for drink with pink cheeks and his black bushy prominent eye brows. He was not judging me anyway. I thought, if I just go into this pub, find a quiet corner at the end of the bar, out of the line of sight of everybody, just order one pint, drink it slowly and then leave, maybe that’s what I would do. It would be a start. So I walked in and sidled past people and said, “Excuse me,” to get past a couple and then three tall young blokes parted to let me continue through the middle of them and eventually I got to the end of the bar. There were two bar maids dressed in black blouses, black pencil skirts and black tights. Their costumes fitted the dark sombre feel of the place with its dark brown stained panelled walls and leaded windows looking out on to the street. I called to one who was standing waiting. To be truthful she had already spotted me and was making a gesture towards me.

“Could I have a pint, please?”

Her voice sounded bright and welcoming, a smile split across her face parting her lips, bright red with lipstick. Her eyes showed friendliness. Her voice, a mixture of that gentle Scottish lilt and an element of  toughness, a confidence against the world, underlying the softness that shows the Scottish character. She was not judging me because I was on my own.

“I’m a southerner as you can tell.”

She smiled  some more.I began to smile too. Her look encouraged me, lightened my mood and I asked.

“What would you suggest?”

“Nicholsons is a local brew. Would you like a dark beer or a light beer?”

”I don’t mind, which one you would suggest?”

“The brown beer has the best flavour.”

“I’ll have the brown beer.”

She smiled again. I could see the other barmaid smiling at me too. They were both welcoming and made me feel relaxed.
I noticed there was a menu. I asked them about food. The taller of the two barmaids, the one who had served me said,

“If you want to sir, just go upstairs to the restaurant and our colleagues will sort you out.”

She made me feel, after my earlier apprehensions, that I could do that. So I drank the brown pint. I enjoyed it very much. The beer tasted slightly sweet, but it had a hoppy smell and flavour to it. The pint went down very nicely. I said thank you to the two barmaids and they looked at me.

“I’m just going upstairs to try my luck,” I said.

That feeling of nervousness made me seek reassurance again.

And upstairs I went. The staircase was lit dimly with lamps on the walls as the stairs twisted to the right. Wood panelling lined the walls of the stairwell and large ornately framed prints of old Edinburgh hung at each stage.
When I got to the top there was a small lobby area before the restaurant room opened out in front of me. The lobby was brightly lit and a young couple stood waiting. In front of us a red rope looped between short posts barring our way. The young man said in an Italian, accent,

“If you wait here they will see you.”

His young lady looked slight in build and shy with a gentle unassuming prettiness about her and she stole a glance at me and smiled. She didn’t say anything.

“Are you from Italy?”

“I’ve been to Rome and Naples and Venice but not to Rimini, I hear it has a beautiful coast. I will go there one day.”

A young waitress, small, slim and neat with red hair cut in a short tight Joan of Arc crop came and asked me if I would like a seat.

“There is only me. Can you fit me in? I’ll understand if that is difficult. Don’t worry. “

“No trouble sir, I’’ll find you a place. Don’t you worry now. You might have to wait a minute or two.”

“Thank you. That would be nice.”

I was beginning to feel good. The two barmaids downstairs, the Italian couple and now the the waitress. It wasn't so bad being on my own. I could talk to people and feel good.
The two Italians went in first.

“Enjoy your meal. Nice to meet you.”

“Nice to meet you too,” said the young man. His girlfriend smiled again. 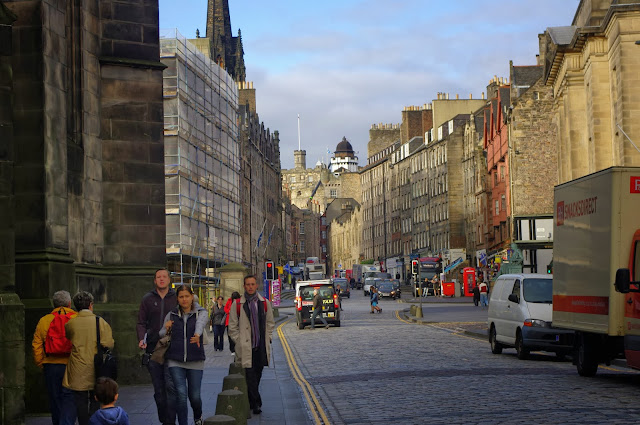 It wasn’t long before the little waitress came back and showed me a table by the window overlooking The Royal Mile and St Giles Cathedral.She gave me a menu to read and left me to it. I sat in a position so I could look out of the window and also into the room at all the other diners. I could see the Italian couple ordering their food on the other side of the room. They looked happy. They looked in love. They looked so easy together. I thought of home and Marilyn and Abi and Alice and Sam and of course Emily in Cardiff. I wished that they were with me. Marilyn would have enjoyed being here.

The little waitress came over standing in front of me talking with fun and happiness in her voice. I’d overheard her at other tables. She appeared so happy to meet everybody and to talk to them and she was being happy and fun with me too now. I loved the experience of ordering my meal. I could feel my mood becoming lighter and a good feeling was coming into my voice and I could hear myself sounding light and funny.

“Tatties are mashed potatoes. They traditionally go with haggis.”

“What gravy would you like? There is a lovely gravy we do with whisky in it.”

She had been writing down the codes for the different things I had ordered and I felt tempted to try another pint of the Nicholsons brown brew, so I ordered another pint.
I was warming to Edinburgh and Edinburgh people and Edinburgh eating places. This was going to be alright. My feeling of apprehension when realising the consequences of being alone were beginning to dissipate.
The haggis and tatties with a jug of the whisky gravy arrived. The brown pint came and I began on them. I was hungry.

Now, haggis is a mixture of things and if I was to describe what went into a haggis, a lot of unmentionable parts of a sheep, my description might make you utter the expletive,”Ugh!!”  All I will say is that it tasted wonderful, meaty, aromatic with herbs and the texture was like warm porridge and the gravy indeed had a tang of whisky to it and the, "tatties," were soft and fluffy. The eating of it all and the drinking of the pint was a real joy. The meal filled a space, I can tell you and this second pint of the brown stuff began to make me feel a warm comfortable glow inside.

When I paid the bill and walked out into the night air I was beginning to feel good about this whole adventure, this whole escapade. 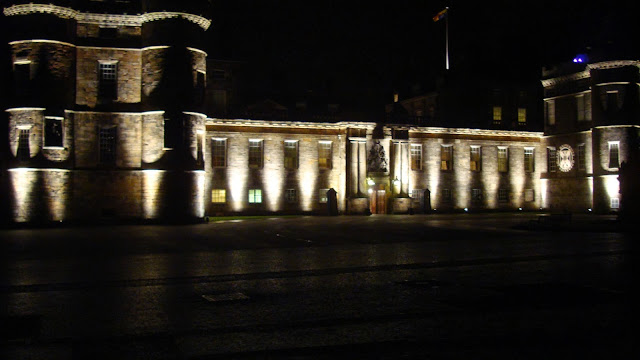 Holyrood Palace in the dark.

I thought I would walk to end of The Royal Mile in the dark; there was some moonlight. I gazed at Holyrood Palace through the railings of the gate and saw the massive hump of Arthurs Seat looming behind it. I spent a moment looking at the modernist architectural confection of the Scottish Parliament building across the way and then walked all the way back to Priestfield and sleep.
Posted by TONY at 04:58:00