A PROUD DAY IN BRIGHTON 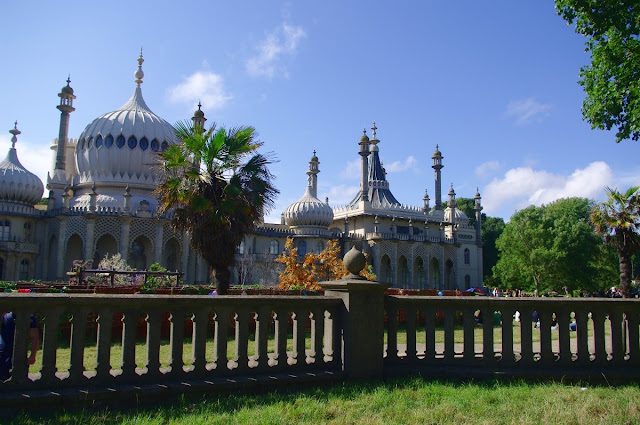 
Saturday 3rd August, another hot day in Britain reaching to 30 degrees centigrade and above. The night before, in Wimbledon, thunder had rumbled and lightening split the heavens followed by a heavy deafening downpour. It didn’t last long. The morning brought blue skies and the promise of more heat. Marilyn, Abigail and myself thought a day in Brighton would be a good idea. 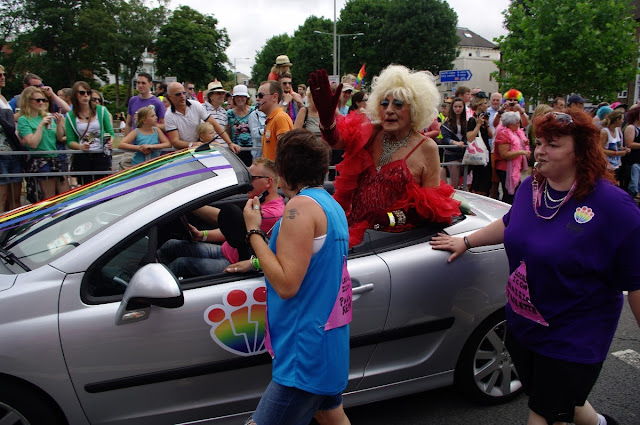 We drove down to Brighton at about 10am. It is only fifty miles from where we live in South London. As we approached Brighton, driving through the South Downs and passing the iconic concrete pillars with Brighton’s coat of arms emblazoned at the top of each pillar ,announcing  your entrance into Brighton, we noticed groups of people, wearing brightly coloured clothing, pink boas and many faces painted in rainbow stripes walking towards Preston Park. Then we saw it. A large poster advertising Brighton’s Gay Pride March!!!! Cars were being parked at the road side and in streets branching off the main thoroughfare into Brighton. We realised we were not going to be able to drive into the centre of Brighton so we found a parking spot in Clermont Road  that leads up to Preston Park Station. We walked into Brighton as far as Preston Park. The park was full of fairground rides and a gigantic arena set out in front of a  main stage. Other stages were set up in other parts of the park. Large banners advertised Paloma Faith’s DJ set, Alison Moyet, Sugababes, Stooshe and MS Dynamite. 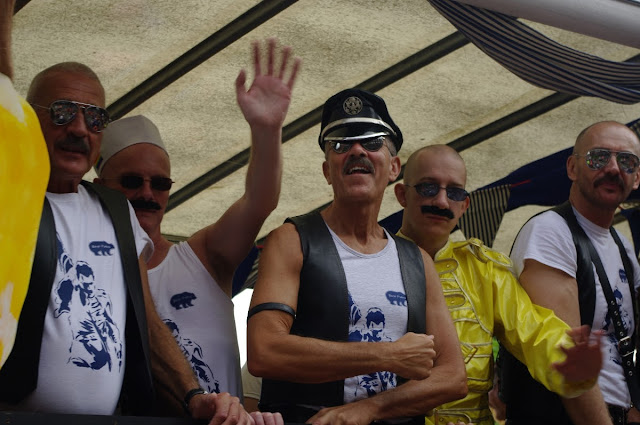 The crowds were gathering and yellow vested security marshals were keeping the crowds on the pavements. The Gay Pride march was on it’s way with floats, banners, flags and thousands and thousands of participants. Leading the march was an open top sports car with a naked gentleman with breast implants, jiggling his breasts and waving and smiling at everybody to the cheers of the crowd.as he was driven ceremoniously past. Then followed float after float carrying people of every  sexual orientation. The drums and the music blared and people waved and people smiled.
There were estimated to be 200, 000 people on the streets of Brighton for the march. The police, the NHS, the fire service, teachers, UNISON, workers unions and rather obtusely, TESCOS and the THE COOP, all had their Gay Pride presence and the march went on and on. The atmosphere was joyous and happy and fun. We were having a fantastic time. 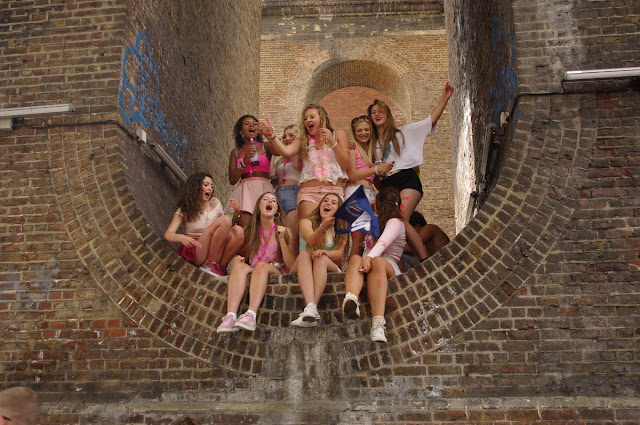 After the march had gone past and entered Preston Park, Marilyn, Abigail and I walked on through the crowds to the centre of Brighton and the sea front. The atmosphere was fantastic. It was electric. The whole of Brighton was buzzing. People were hanging out of windows. They stood on roof tops and balconies and waved and cheered to all of us walking past. The streets were crowded and the parks were full of sitting and prone people, most drinking and lots of talking and laughing. We walked along the seafront and found a fish and chip shop where surprisingly we found an empty table and chairs to sit at. The fish and chips were wonderful. The best chips have a light golden appearance,  and are slightly crunchy when bitten into. The best fish is cooked to a light, fluffy, moist consistency inside a golden crispy batter. These fish and chips were beautiful, sprinkled with sea salt and splashed with  malt vinegar. 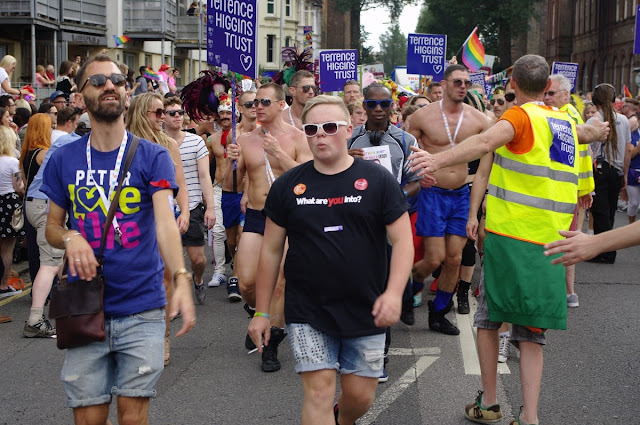 THE BOYS
We went down onto the gravel beach and sat in the sun amongst the crowds and watched the glassy green sea crash it’s waves against the shingle. The sound of Brighton Beach, with the sea crashing against the shore is captured in the opening moments of Quadrophenia by The Who.  It is a refreshing and exciting sound. All around, men were kissing men, women kissing women and a few men and women kissing each other  too. One great big affectionate love affair was going on. We wandered round some of the art galleries near the sea front and I took lots of photographs.


Later in the afternoon when we were making our way out of Brighton to our car next to Preston Station the streets were beginning to fill with drunken and raucous people.. It was getting very loud and crazy. We came across a couple of minor incidents where fights were beginning. The police were keeping a calm presence. Marilyn nearly intervened  when we witnessed a man lifting the dress of a comatose drunken woman lying on the steps leading up to a house and his friend was taking photographs of the woman’s knickers. As Mariyln approached, ready to  pull the man away and give him some verbal stick, she can give some rather aggressive verbal castigation when she needs to, the woman woke and smacked the man around the face with a strong round house lunge, laughing manically at him. It was all a joke. I hope anyway. 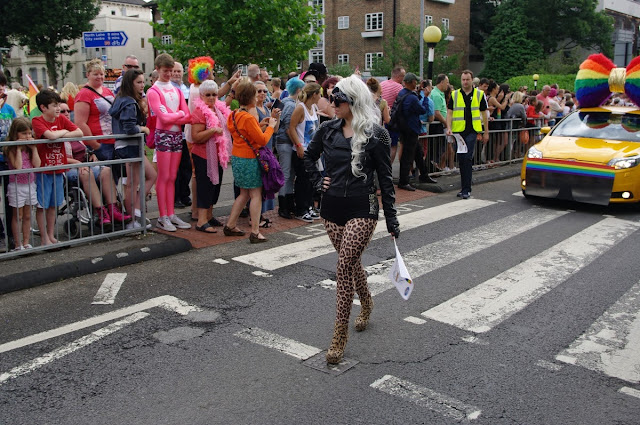 STRUTTING HER STUFF
﻿
As we approached Preston Park, Paloma Faith was pulling in the crowds at one stage and on the main stage a band was belting out a piece to a massive adoring crowd of tens of thousands.


We got to the car and drove on home.

. A Lambretta Scooter. A Brighton icon from the 60's.

Here is a history of Brighton Gay Pride from their website. 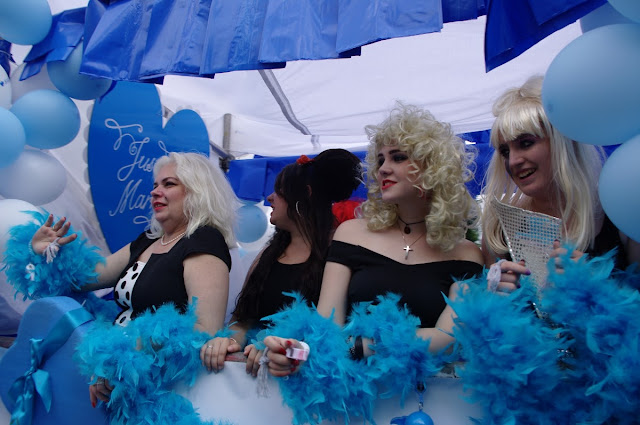 Organised by the Sussex Gay Liberation Front, it was a brave thing to do at the time. Only seven years before that and gay men simply getting it on together would’ve ended in a gaol sentence. The first Pride march may have been small in numbers but they did it in style ending the day with a Gay Dance at the Royal Albion Hotel. 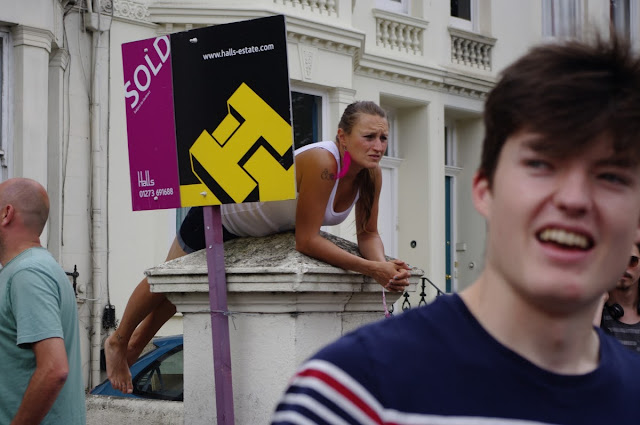 SOMEBODY GET ME DOWN. AN ONLOOKER

It wasn’t until 1991 that Pride came back to Brighton. It was born out of political objection to the government passing laws to ban the ‘promotion’ of homosexuality. Pride in 1991 was very homemade but very ambitious with a festival of events around town over the May bank holiday, ending in a Pink Picnic in Preston Park.

The political pride marches lasted four years struggling against a homophobic local press and pitiful financial support from the local council. Pride 1992 returned to Preston Park but Pride 1993 ended with a Pink Picnic in Queens Park. A taste of the march through town and after-party on the Level in 1994 can be seen in this film – how times have changed…
The following year saw the start of the party prides, though once again Pride took place on the relatively small space at the Level. The organisers managed to convince local businesses and performers that it was a good thing to be associated with and slowly Pride began to grow and change. The classic format of parade/park/street party is now something we all expect.

The organisers have changed regularly over the years and financial problems never seemed far away, yet Pride has endured. In 1996 it returned to Preston Park where it has remained ever since. In a controversial move at the time, the date for Pride in 1997 was moved from the May bank holiday to early August. However, being an outdoor event it has always been hostage to weather conditions and some years have seen merry revellers happily rolling around in mud lakes Glastonbury style. 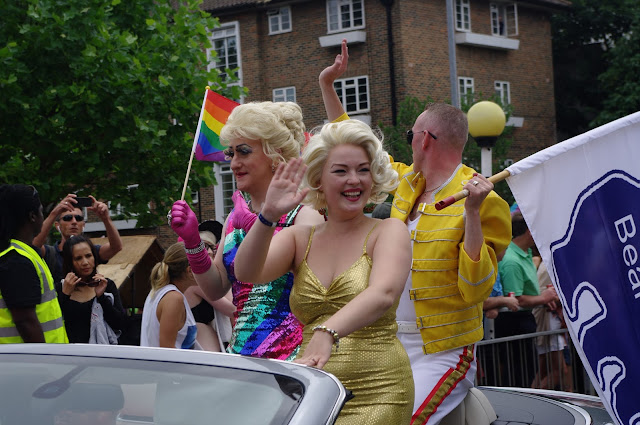 Over the decades Pride has seen a couple of ‘weddings’, ever more outrageous floats and the odd anti-gay demonstrators who have been booed out of the park. In 2004 it was awarded charitable status, and as the crowds grew so did the scale of the celebrity appearances from Lisa Stansfield to Barbara Windsor, and more recently local talent The Freemasons and Fatboy Slim.

The diversity of tents in the park has expanded to reflect the attendees, including specific spaces for women, people of colour, trans folk, bears, cabaret and more, until it was acknowledged to be the largest free Pride event in the UK.

Things came to a head in 2010 when a record-busting estimated 160,000 people celebrated Pride in Brighton, yet it was still dogged by
money worries. The following year saw the controversial introduction of charged entry to the park celebrations.
From its birth last century to the present day Brighton Pride has meant many things to many people. It has played its part in changing attitudes and promoting acceptance and equality, and of course that being LGBTQ or whoever you are, is something to be proud of.

As with most histories of lesbian and gay Brighton, thanks must go to the work of Brighton Ourstory.
Alf Le Flohic 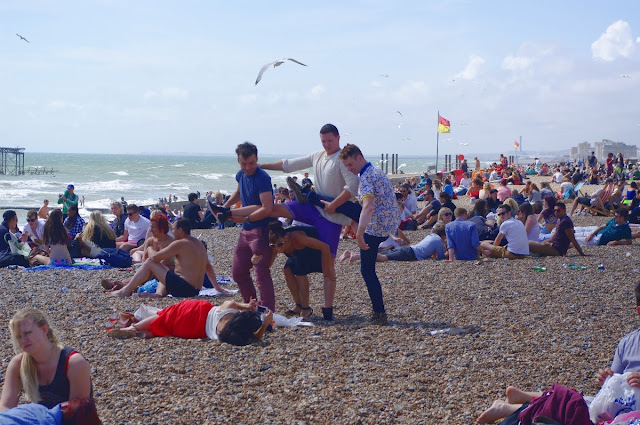 BOYS WILL BE BOYS. GIRLS WILL BE GIRLS