WRITERS I HATE TO LOVE. 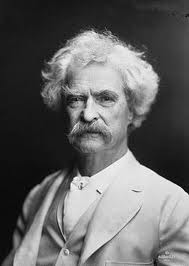 Mark Twain famously lashed out with vehemence against Jane Austen in a most startling and shocking statement.
"Everytime I read 'Pride and Prejudice' I want to dig her up and beat her over the skull with her own shin-bone."
However he had a down to earth , solid view of life and helps all of us to perceive our situation better.
Here is one of those life maxims you can find peppered throughout Twain's work. This comes form Tom Sawyer.
"He had discovered a great law of human action, without knowing it--namely, that in order to make a man or a boy covet a thing, it is only necessary to make the thing difficult to attain."
So true, so true!!!!
WALT WHITMAN 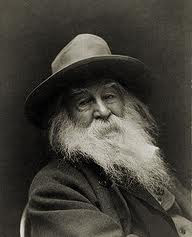 I must apologise. Raquel has pointed out to me that I attributed the above salacious, damnable quotation by Mark Twain to Walt Whitman. However I like this Whitman poem so much I don't want to remove it. So, in honour of that snowy bearded, gentle looking, old man in the picture above, Walt Whitman, towards whom I hold no grudge, hatred or dislike here is one of his marvellous poems.

ON THE BEACH AT NIGHT ALONE

N the beach at night alone,
As the old mother sways her to and fro singing her husky song,
As I watch the bright stars shining, I think a thought of the clef of the universes and of the future.
A vast similitude interlocks all,
All spheres, grown, ungrown, small, large, suns, moons, planets,
All distances of place however wide,
All distances of time, all inanimate forms,
All souls, all living bodies though they be ever so different, or in different worlds,
All gaseous, watery, vegetable, mineral processes, the fishes, the brutes,
All nations, colors, barbarisms, civilizations, languages,
All identities that have existed or may exist on this globe, or any globe,
All lives and deaths, all of the past, present, future,
This vast similitude spans them, and always has spann'd,
And shall forever span them and compactly hold and enclose them. 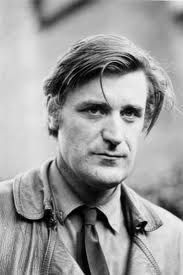 Some say Ted Hughes killed Sylvia Plath. He didn't, she killed herself but his womanising could possibly have pushed her over the edge. She was prone to suicidal thoughts and yearnings. The great majority of us would not have committed suicide in the same instance no matter how shitty life was. His poetry is the best poetry I have ever read about wildlife and nature.
Hawk Roosting by Ted Hughes
I sit in the top of the wood, my eyes closed.
Inaction, no falsifying dream
Between my hooked head and hooked feet:
Or in sleep rehearse perfect kills and eat.

The convenience of the high trees!
The air's buoyancy and the sun's ray
Are of advantage to me;
And the earth's face upward for my inspection.

My feet are locked upon the rough bark.
It took the whole of Creation
To produce my foot, my each feather:
Now I hold Creation in my foot

Or fly up, and revolve it all slowly -
I kill where I please because it is all mine.
There is no sophistry in my body:
My manners are tearing off heads -

The allotment of death.
For the one path of my flight is direct
Through the bones of the living.
No arguments assert my right:

The sun is behind me.
Nothing has changed since I began.
My eye has permitted no change.
I am going to keep things like this. 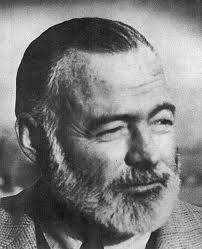 ERNEST HEMMINGWAY
Ernest Hemmingway was a drunkard, an alcoholic, a mysogynist, a liar, a wife beater,a self promoter with a massive ego and he wrote some of the most intense novels I have ever read. Stories that reached deep inside my consciousness. In them I recognised the essence of true human endeavour and life. The Old Man Of The Sea and For Whom The bells Toll.Our world would be a much much poorer place without them.
"Now is the time to think of only one thing. That which I was born for."
(The Old man of The Sea by Ernest Hemmingway)
"I will learn from Pilar what I should do to take care of a man well and those things I will do," Maria said. "Then, as I learn, I will discover things for myself and other things you can tell me."...
(For Whom The Bell Tolls by Ernest Hemmingway)
Posted by TONY at 09:24:00